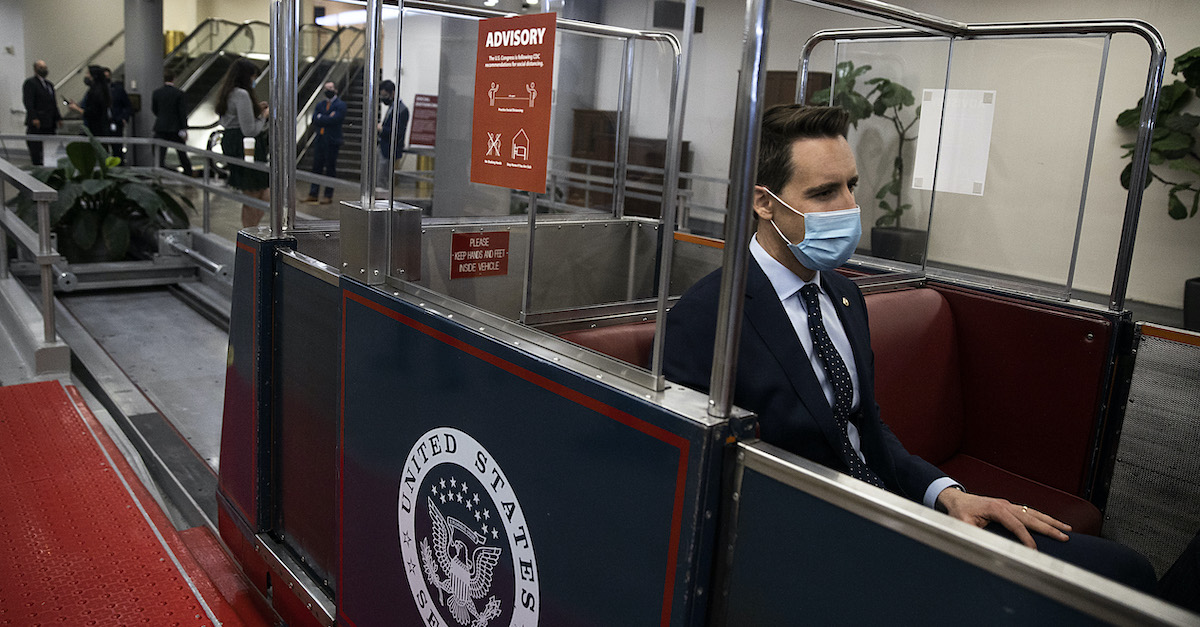 Outgoing President Donald Trump falsely told supporters that his second-in-command Mike Pence could give themselves a second-term. Texas Rep. Louie Gohmert received a federal court drubbing for peddling the same myth to a judge. Their party’s radical wing in the Senate tried to pump the faithful with hope based on mangled U.S. history and misinterpretations of the Electoral Count Act of 1887.

Vice President Pence dispelled the nonsense on Wednesday in a letter to Congress.

“It is my considered judgment that my oath to support and defend the Constitution contains me from claiming unilateral authority to determine which electoral votes should be counted and which should not,” Pence said.

After all the lawsuits and fundraising drives, experts say gravity will pull their last-ditch efforts to derail the upcoming Joe Biden presidency down to planet Earth, but they warn that the sound and fury could spell lasting damage to democracy and unrest on the streets of Washington, D.C.

“When you have about a fifth of the Senate and maybe 150 representatives start saying that that system is rigged, or that it’s untrustworthy, then it begins to erode kind of the basis of how a democratic republic is supposed to work,” Meredith McGehee, the executive director of the non-profit Issue One, said in a briefing by the National Task Force on Election Crises.

Spurred on by a Trump tweet, crowds already poured into the nation’s capital on Tuesday night, where many were seen clashing with Metropolitan Police. One speaker put a public-health crisis under a petri dish with a “mass-spreader event” where he exhorted maskless attendees to hug their neighbors, and a leader of the so-called “Stop the Steal” movement waved a rhetorical bloody shirt with a chant of “Victory or death!”

“The kind of irony here is this domestic kind of erosion that’s happening by our own president in this case could probably there’s nothing much more to could do that make our foreign adversaries happier,” McGehee added.

That was also the assessment of ex-U.S. Congressman Denver Riggleman, who told Law&Crime that the sights bore all the hallmarks of radicalization from his more than 20-year stint in counterterrorism and his experience as a Republican representative of a district that includes Charlottesville, Virginia.

“I think what you saw today with Alex Jones and some of the insane rhetoric on the dais today, that’s the first time I’ve been that afraid since Charlottesville,” Riggleman said in a phone interview, referring to the InfoWars conspiracy theorist and the far-right rally that left three dead, 33 injured and a U.S. city terrorized by a tiki-torch-weilding collection of neo-Nazi and fascist groups.

“I think that if it were to happen in D.C., you’re talking about a force multiplier,” Riggleman added.

On the eve of the Joint Session, Proud Boys leader Enrique Tarrio was banned from Washington, D.C., where he faces charges of destroying property from a historic Black church and felony possession of high-capacity firearm magazines branded with the logo of his extremist group.

Riggleman, whose term expired on Jan. 3, will not be in the House of Representatives for the Joint Session, but he has been urging his former colleagues since the election to drop their attacks on the legitimacy of the election and meritless claims of voter fraud that have failed in court.

Republican Senators Ron Johnson of Wisconsin, James Lankford of Oklahoma, Steve Daines of Montana, John Kennedy of Louisiana, Marsha Blackburn of Tennessee and Mike Braun of Indiana issued a carefully worded joint statement describing “unprecedented allegations” of voting irregularities, without claiming that there was truth to any of the assertions. Dissatisfied by their rejection by the U.S. judiciary, Department of Justice and the intelligence communities, the senators propose delaying Biden’s win until the political branches take a crack at their own supposed audit.

The precedent that they claim for this is the contested 1876 presidential election, where Republican Rutherford B. Hayes was declared the winner following a congressional compromise that some historians believe spelled the end of post-Civil War Reconstruction.

“The ultimate bargain was the Republicans got control from the White House,” Columbia University professor Eric Foner told Law&Crime in a phone interview. “The Democrats were recognized as having control over the entire South, and that led to slowly, not immediately, but slowly the imposition of what we call the Jim Crow system and eventually taking the right to vote away from Black men in the South and the imposition of segregation.”

“So the long term consequences of the bargain of 1877 were pretty disastrous for Black Americans,” he added.

Foner and other leading scholars of Reconstruction in the United States note that the GOP senators’ analogy to the present is “grasping at straws.”

“The dispute in this election isn’t really the same as the previous in 1876 because there you had two different sets of returns sent up to Washington from three states: Louisiana, South Carolina and Florida, and somebody had to figure out who actually carried those states,” the professor noted.

This past election, every state certified only one set of returns, despite the appearance of fake pro-Trump electors in Arizona and elsewhere, who were never certified and have no official weight.

On a basic level, Boston College professor Heather Cox Richardson noted that both eras featured Republicans hoping to take the White House over the apparent will of the voters.

“What they are doing is they’re skimming the absolute surface and saying that in ’76 and in the present, you have cases where a popular leader wins the popular vote, and yet somebody else gets put in place,” Cox Richardson told Law&Crime, noting that Trump wants to unseat the popular vote winner just like Hayes did in the 19th century.

As for Trump’s discredited voter fraud conspiracy theories, Cox Richardson noted that there is no comparison to the evidence of naked cheated observed in the late 19th century, including ballot boxes broken open. “They’re locked, but they’ve been smashed open with an axe. That’s really different than nowadays when we have our signatures and our applications and we have bar codes and we have all the stuff we have,” she noted.

She called the GOP analogies the view from a “quarter of an inch deep.”

“The minute you get even half an inch deep, it’s like you know they’re not the same thing,” she added.

Democrat Samuel J. Tilden pulled hundreds of thousands of votes than his rival, undoubtedly aided by a wave of suppression against Black voters made impossible by modern voting systems.

Both Foner and Cox Richardson both noted that the vaunted party of Abraham Lincoln switched sides on the issue of voter suppression.

“What is not mentioned is that the only reason that Tilden came even close to winning the election is that the Democrats had conducted a violent campaign to prevent Black people from voting,” Foner noted. “There were several states in the South where, in a free and fair election, the Republicans would win by a large margin.”

In Michigan, Wisconsin, Pennsylvania, Georgia, and elsewhere, Trump’s post-election strategy has relied upon attempting to invalidate votes in counties and metropolitan areas where the most Black people live.

“It’s certainly clear today that the voter suppression of laws and procedures that Republicans have been putting forward well before this election are targeted at not just Black, but minority communities of various types,” he added.

Today’s joint session takes place on the heels of Rev. Raphael Warnock and Jon Ossoff’s victories in the Georgia runoffs, sending the Peach State’s first Black and Jewish senators to Capitol Hill and giving Biden a narrow space to maneuver with an ambitious legislative agenda. The senators’ surprise victories has been called a sea change in the Deep South made possible by Democratic activist and ex-state legislature Stacey Abrams’s efforts to reverse barriors to the ballot, including a massive voter roll purge that some in her party blame for her gubernatorial defeat.

In a historical irony, Brian Kemp—who signed onto that purge—has become a target of Trump for refusing to overturn his defeat to Biden.