Trump Legal Team Wants Rudy Giuliani to Argue in Federal Court Again, But There Are Some Problems 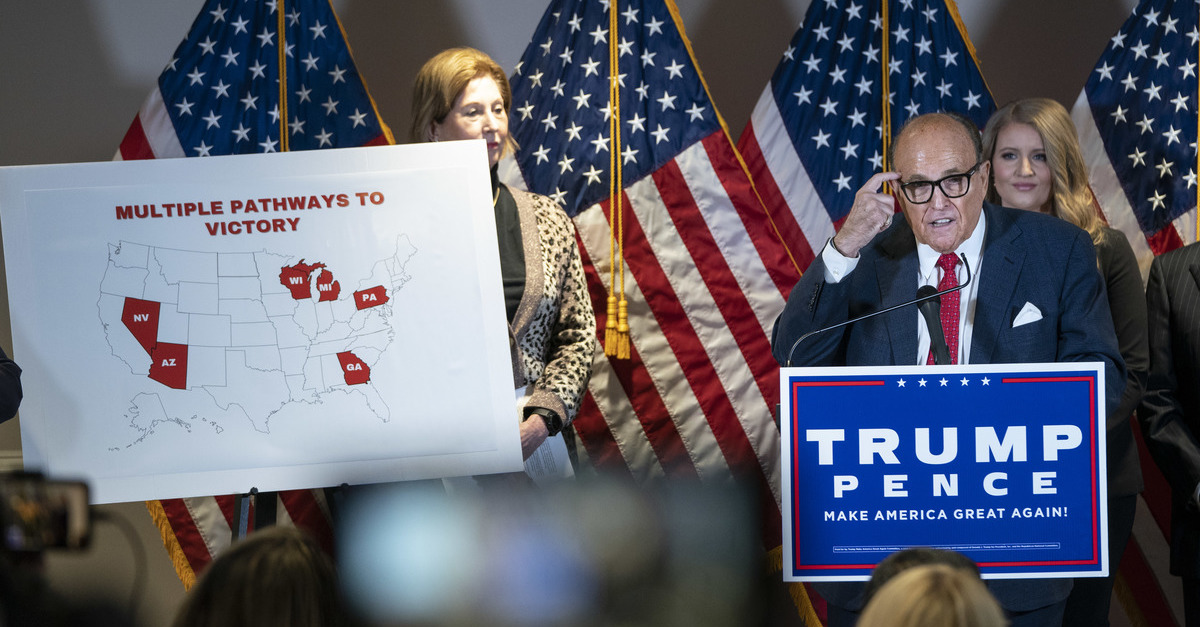 An attorney representing the Trump campaign filed a letter on Wednesday informing the Chief Clerk of the U.S. Court of Appeals for the Third Circuit that the campaign was available for a brief oral argument to further explain its application and requesting that Rudy Giuliani be permitted to appear on behalf of the campaign despite not having the necessary certification.

The appeal asks that the Third Circuit overturn a district court ruling denying the campaign’s request to file a second amended complaint in its effort to overturn the election results in Pennsylvania. The letter—penned by the latest addition to Donald Trump’s legal team, Marc A. Scaringi—asks the court to admit Giuliani pro hac vice for the argument, claiming that because Trump received “over 70 million” votes “the Campaign’s claims should be heard on the merits, and not dismissed for perceived procedural irregularities.”

This appears to be problematic for several reasons. First, according to the Third Circuit’s rules, pro hac vice admission is simply not available for Giuliani. It is available “only to attorneys who have been appointed by this Court to represent a litigant pro bono.” Attorneys who are not representing a client pro bono [free of charge] “cannot appear Pro Hac Vice and must follow the standard admission process in order to enter an appearance with this Court.”

As Law&Crime previously reported, Giuliani allegedly requested that he be paid $20,000 per-day to lead the Trump campaign’s legal efforts, an astronomical sum that would be the antithesis of pro bono representation. Though Giuliani denied he asked for that much in payment, he did confirm that he would be compensated by the campaign, telling the New York Times that he and the president would “work it out at the end.”

Second, despite Scaringi’s plea for the case to be heard on the merits, the appeal before the court does not deal with the merits of the case; it’s only a request that the circuit judges direct the trial judge to allow the campaign to file a third complaint (second amended complaint) in its ongoing litigation in Pennsylvania.

The campaign filed its initial complaint on Nov. 9 seeking to block Pennsylvania from certifying its election results due to widespread fraud, but quickly scaled back the lawsuit with a red-lined amended complaint on Nov. 15 that completely abandoned the unsubstantiated allegations of fraudulent activity. During that span, nearly all of the attorneys representing the campaign withdrew from the lawsuit, leading to Giuliani’s takeover and subsequent request to file a second amended complaint. U.S. District Judge Matthew Brann denied the request, leading the campaign to file the appeal.

Additionally, a majority of the letter’s text—which is barely three pages—appears in five footnotes attached to the second page which are actually supplemental arguments in favor of the court hearing the campaign’s appeal.

For example, the footnotes attempt to address why the campaign “incorrectly withdrew certain allegations and claims” in its first amended complaint, and argued that the lawsuit was not moot by claiming that “federal courts may order the result of the Election decertified, which, as Plaintiffs can explain, would render the Certificate of Ascertainment allegedly issued by Governor [Tom] Wolf invalid.”

Following in the pattern of the campaign’s Pennsylvania legal filings, the Trump legal team letter was promptly criticized by lawyers.

“Holy cow, Trump campaign trying to sneak legal arguments into a letter purportedly about availability for oral argument in 3rd circuit. One footnote AGAIN tries to explain why they abandoned claims and allegations when they amend their complaint,” UC Irvine law professor Rick Hasen wrote.

Holy cow, Trump campaign trying to sneak legal arguments into a letter purportedly about availability for oral argument in 3rd circuit. One footnote AGAIN tries to explain why they abandoned claims and allegations when they amend their complaint. https://t.co/OHafPo2isC

Additionally, while Scaringi’s letter seeking Giuliani’s pro hac vice admission claimed that the former New York City mayor was “admitted to the Second Circuit Court of Appeals,” several pointed out that that does not appear to be the case, including appellate lawyer Raffi Melkonian.

New York-based criminal defense attorney Scott Greenfield said that despite the “allure” of hearing Giuliani argue before another federal court, the motion should be denied.

The allure of Rudy doing oral arg in the Third Circuit is nearly unbearable. But for the sake of society and sanity, the court should deny the motion. https://t.co/V7jQ0ORnPv

See below for the full letter: