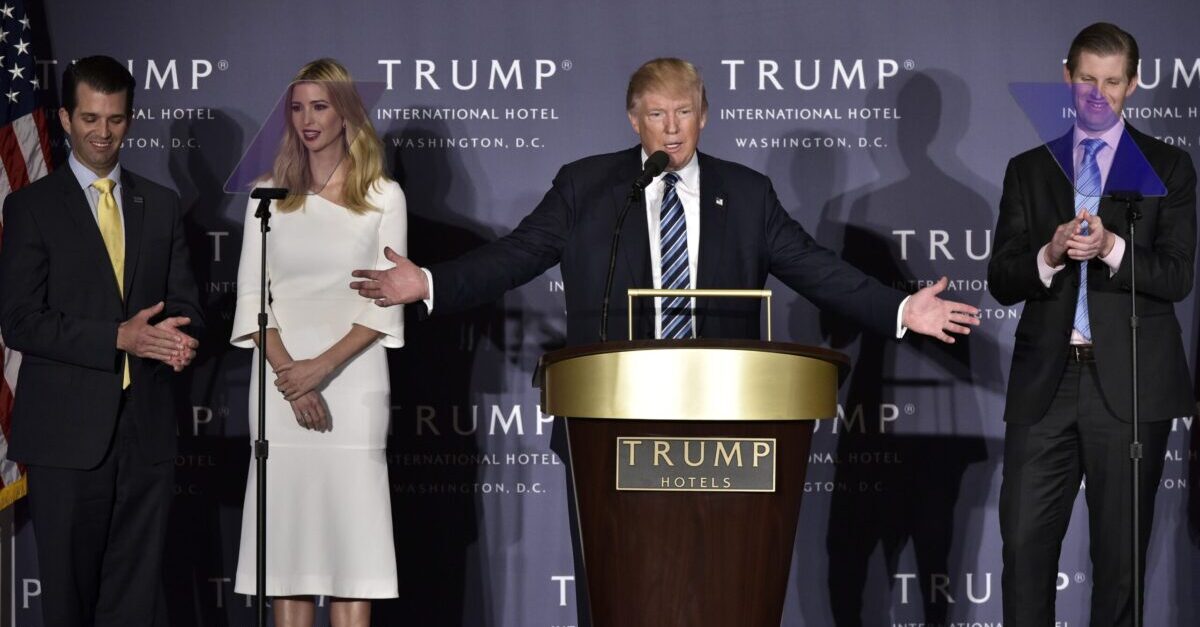 A federal judge sitting in the Southern District of New York has refused to stay a lawsuit alleging that Donald Trump, Donald Trump, Jr., Eric Trump, Ivanka Trump, and the Trump Corporation committed “various business torts,” including engaging in an illegal pyramid scheme.

The complicated and anonymous class action lawsuit, filed by a Jane Doe and others, resulted in motions to stay the proceedings and interlocutory appeals by the Trumps, the Trump Corporation, and a third party called ACN Opportunity, LLC. ACN was ordered to produce documents relevant to the claims. Interlocutory appeals are appeals to higher courts filed in the midst, rather than at the conclusion, of lower court litigation.

The judge, Lorna G. Schofield, a Barack Obama appointee, said the lawsuit would not be put on hold.

The lawsuit, originally filed in Oct. 2018 as an anti-“racketeering enterprise” action, was later streamlined. The class sued on various state and federal charges–including “racketeering and conspiracy to racketeer” claims. The two federal claims were dismissed by the court after the Trump family filed for a broad dismissal in January 2019. But the case is yet living.

The class action plaintiffs allege that the Trump family business promoted a multi-level marketing, or pyramid, scheme known as ACN Opportunity, LLC. ACN, the plaintiffs said, was a “get-rich-quick scheme” that relied on Trump and his family “conn[ing] each of these victims into giving up hundreds or thousands of dollars,” in violation of various state laws:

The plaintiffs claimed that the Trump family falsely endorsed and promoted ACN by insisting that the enterprise “offered a reasonable probability of commercial success”—even using The Celebrity Apprentice to draw them in:

According to the lawsuit, ACN was paying the Trumps for the above-described exposure but this was not public knowledge.

Schofield walked the case through the “traditional standard” for determining whether to stay litigation. The first factor is whether the parties applying for the stay — the Trumps and ACN — are likely to succeed on the merits.  Here, Schofield ruled that they are not, and for several reasons.

The first reason the Trumps and ACN are not likely to succeed — here, in an interlocutory appeal — is because they attempted to force the case into arbitration “despite the absence of any written agreement between” the parties which required arbitration. “The fundamental rule of arbitration is that arbitration is a matter of contract and a party cannot be required to submit to arbitration any dispute which he has not agreed so to submit,” the judge said (internal quotations and citations omitted).  The judge also said that a narrow exception to that rule did not apply in this case because the “Plaintiffs were duped about the nature of the relationship between ACN and Defendants.” Second, the defendants — the Trumps and ACN — “waived their right to arbitrate by delaying their motion to compel arbitration.” Per the judge:

Thus, to prevail on appeal, Defendants would need to overcome the general rule requiring an agreement to arbitrate, satisfy the requirements to apply the narrow exception of estoppel, and overcome the finding of waiver. Given this context, the first factor of likelihood of success on the merits weighs heavily in favor of denying the stay.

In other words, the Trumps, their business, and ACN botched the case, and the likelihood that they will succeed in an interlocutory appeal is low.

The second of the four factors for a stay, irreparable injury, did not outweigh the defendants’ loss on the first factor, the judge ruled.  The third factor, “substantial injury” to the plaintiffs, factored “slightly against a stay;” the fourth factor, “public interest” weighed “slightly in favor of a stay,” the judge ruled.

Here’s what the judge said about the “public interest” determination: “As a private business dispute, the action does not give rise to a public interest in the lawsuit. That one of the Defendants has since assumed a position of national prominence does not create the type of public interest typically found to weigh against a stay.”

And here’s how the judge summed up the relevant balancing act:

Considering all four factors, a stay is not warranted pending resolution of Defendants’ or ACN’s appeal. Weighing the two “most critical” factors — likelihood of success on the meritsand irreparable harm — against each other, any prejudice that Defendants and ACN may suffer from proceeding with the litigation during the pendency of the appeal does not outweigh the strong likelihood that Defendants and ACN will not succeed on appeal. As the final two factors weigh only slightly and in opposing directions, they do not alter this balance.

In April, Judge Schofield denied a Trump family bid to force this matter into private arbitration. And speaking of the Apprentice, there’s been much ado about the prospect of never-seen recordings coming out as a result of this case (though these tapes may not include the long-rumored and alleged “slur” tapes).