Lin Wood at a “Stop the Steal” rally in early December

Just when you thought you had seen it all from various figures litigating and going off the deep end in the aftermath of the 2020 election, attorney Lin Wood told his 800,000-plus Twitter followers on Thursday that Chief Justice John Roberts said during a phone call in August that President Donald Trump is a “motherfucker” who could not be allowed to have another term.

Wood, who has the QAnon hashtag “#WWG1WGA” in his Twitter bio and recently called on Trump to declare martial law, prefaced his attack on Roberts and Justice Stephen Breyer by saying that “This may be most important tweet of my life.”

In the next tweet, Wood made a claim that was both risible and beyond belief. He initially claimed to have knowledge of a phone conversation from Aug. 19 wherein Roberts vowed that Trump was a “motherfucker” who would not be permitted to be reelected. Wood also bizarrely claimed that Breyer was in on the conspiracy.

Wood did not elaborate and did not provide any evidence whatsoever to back up this wild claim. What he did do was preemptively attempt to discredit anyone who criticized him or questioned what he was saying. He only asserted that there is “documentation” in the hands of unspecified third parties.

“The documentation of my claims about Justices Roberts & Breyer has been placed in hands of several third parties. When one cannot attack message, all too often messenger is attacked,” Wood said. “But TRUTH cannot be denied. It cannot be destroyed. I have made sure of that TRUTH.”

All of this raises some questions like: When did Wood “learn” of this presumably non-existent August phone call? Has he been sitting on this for months? Wouldn’t that mean he is in on the conspiracy? Well, Wood subsequently tweeted “if my date below is incorrect by a couple of months […]”—which raises some obvious questions about the “documentation” he claimed to have.

By the way, if my date below is incorrect by a couple of months, just ask Chief Justice John Roberts. He can give you the exact date of his incriminatory phone conversation. While you have his attention, ask him some other questions. He owes The People answers. He owes us TRUTH. https://t.co/8pPduB7Cr1

If I wanted to win a pending case, I wouldn't call the judge a corrupt sexual predator. But that's just me.
And, yes, defaming Chief Justice Roberts is an ethical violation, if you were wondering. pic.twitter.com/nUJRhe5T9Q

I'll save everyone else the search pic.twitter.com/Ik9DCSeMS4

On the website for his firm, Wood says he is admitted to practice before the Supreme Court. In fact, Wood and Sidney Powell are currently trying to get the Supreme Court to hear their Georgia “Kraken” case.

This Twitter rant would seem to be a pretty strange way to achieve that goal. But the tweetstorm didn’t stop here.

Wood, calling Roberts corrupt and deceitful, said the chief justice is the “reason” the Supreme Court hasn’t gotten involved in 2020 election disputes. This is clearly not true. Just last week, the entire Supreme Court completely rejected the Texas lawsuit, as well as Wood’s attempt to weigh in on the case. He misspelled his own last name in the filing. Still, many of the president’s followers were convinced that the Texas lawsuit had to be going somewhere. It didn’t, as legal experts predicted.

But Wood also blamed unspecified “others.” Wouldn’t that mean Roberts isn’t the reason?

Corruption & deceit have reached most powerful office in our country – the Chief Justice of U.S. Supreme Court.

This is a sad day for our country but a day on which we must wake up & face the truth.

Roberts is reason that SCOTUS has not acted on election cases. Others involved.

And, yes, there’s also a Jeffrey Epstein reference in the series of tweets.

I have long had questions about “the John Roberts” on Jeffrey Epstein private jet flight logs. I suspected it was our Chief Justice. MSM has shown no interest in investigating issue to find TRUTH.

America is now entitled to know the answer.

Every lie will be revealed.

“I have long had questions about ‘the John Roberts’ on Jeffrey Epstein private jet flight logs,” Wood said, steering the tweets in a more blatant Q-themed direction. “I suspected it was our Chief Justice. MSM has shown no interest in investigating issue to find TRUTH.”

Wood has actually referenced the Epstein flight logs and Roberts a few times, pointing to court-released documents of said flight logs (see page 562). The name “John Roberts” pops up in a row for Feb. 10, 2011 on a flight from Palm Beach International to Teterboro Airport in New Jersey. 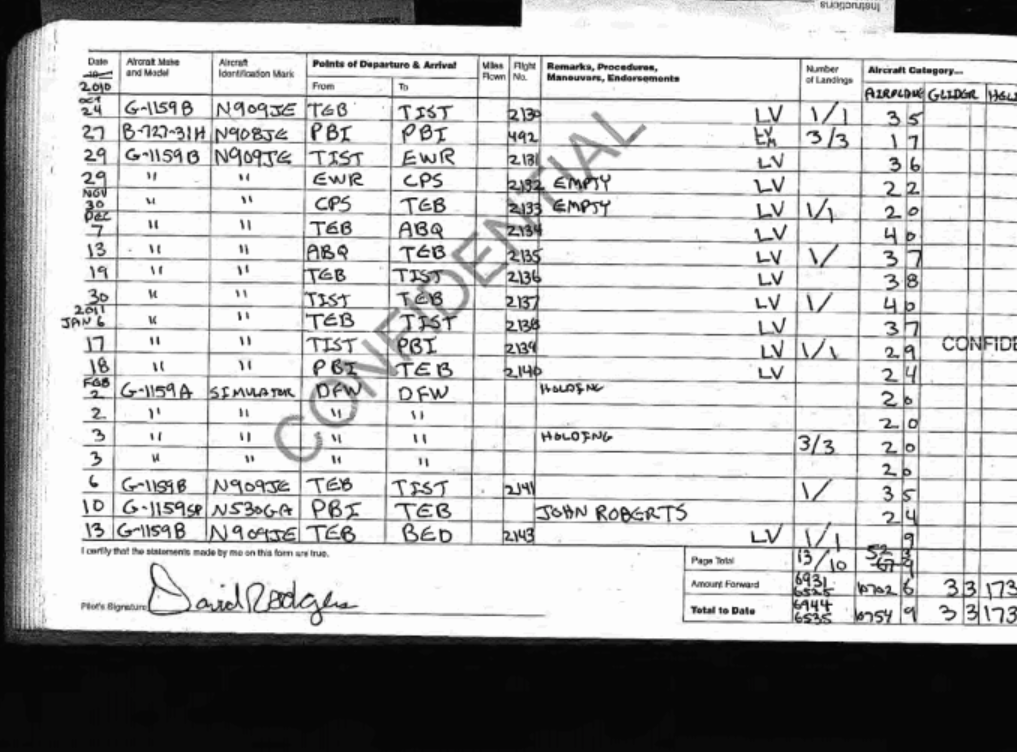 Let’s be clear: there is no proof that this is the chief justice, and he has never addressed this. John Roberts is a fairly common name. It’s why, for instance, Fox News Chief White House Correspondent John Roberts felt compelled to comment on the flight logs back on August 14, 2019—which was days after Epstein died behind bars and when “Epstein didn’t kill himself” conspiracy theories were running wild.

To anyone who thinks this might be me, I did not know Epstein, never met him, and certainly never flew on any of his aircraft. pic.twitter.com/sakGSDZTE4

“To anyone who thinks this might be me, I did not know Epstein, never met him, and certainly never flew on any of his aircraft,” Fox’s Roberts said.

But Wood’s far-right followers firmly belief that Chief Justice Roberts is compromised and part of the “deep state.” This was what Wood was catering to in the Thursday tweets (and he says we are the “propaganda rag”…).

And countless Wood followers undoubtedly falsely believe as well that there is a photo proving that Roberts was ever on Epstein’s private island. There isn’t, but here’s how we know they believe that: 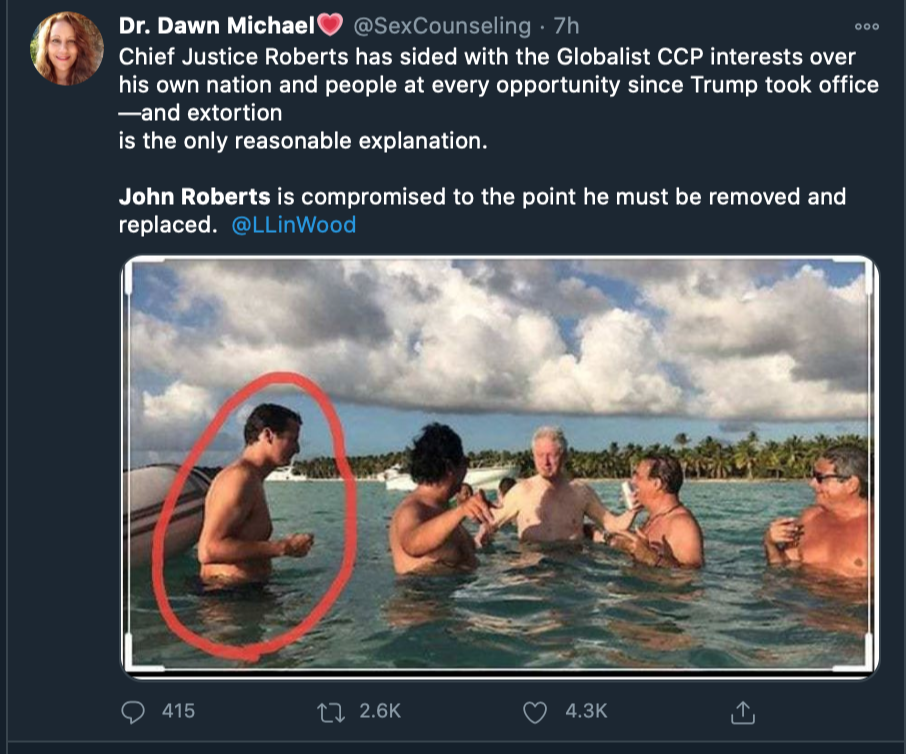 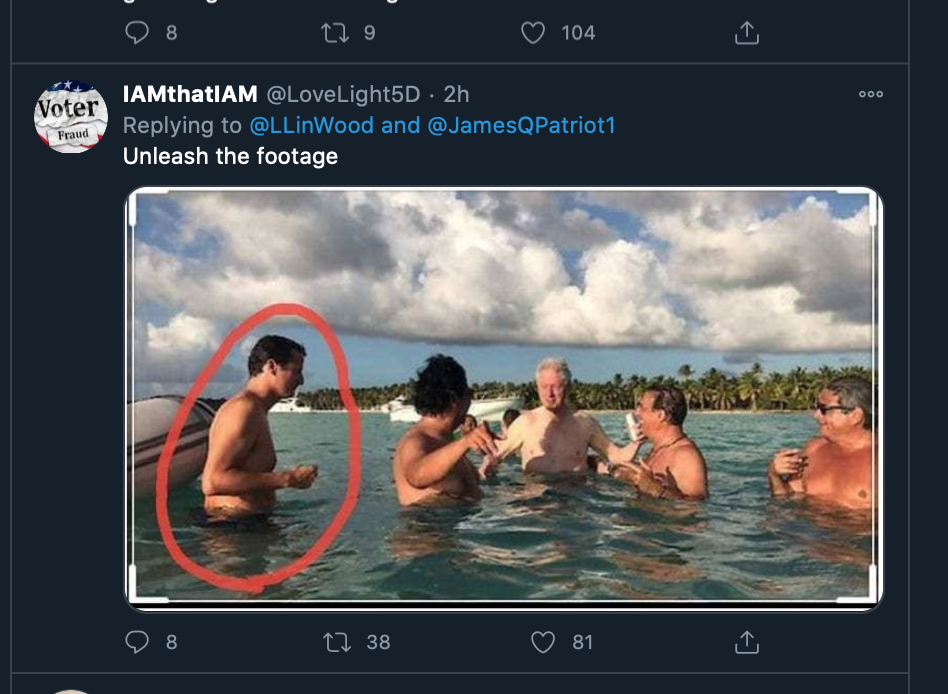 In any event, Law&Crime reached out to the Supreme Court’s Public Information Office for a response to Wood’s wild tweets. We’re going to guess that these attacks are beneath the high court’s comment, but we will update this story if we hear back.

And if you think it was a waste of time unpacking all of this, understand that “John Roberts” and “Justice Roberts” are currently trending on Twitter, in no small part because of what Wood told his followers. It should also be noted that Wood is someone President Trump retweeted within the last two days. The tweet said Georgia’s Republican Gov. Brian Kemp and Georgia’s Republican Secretary of State Brad Raffensperger (whose family voted for Trump) “will soon be going to jail.” 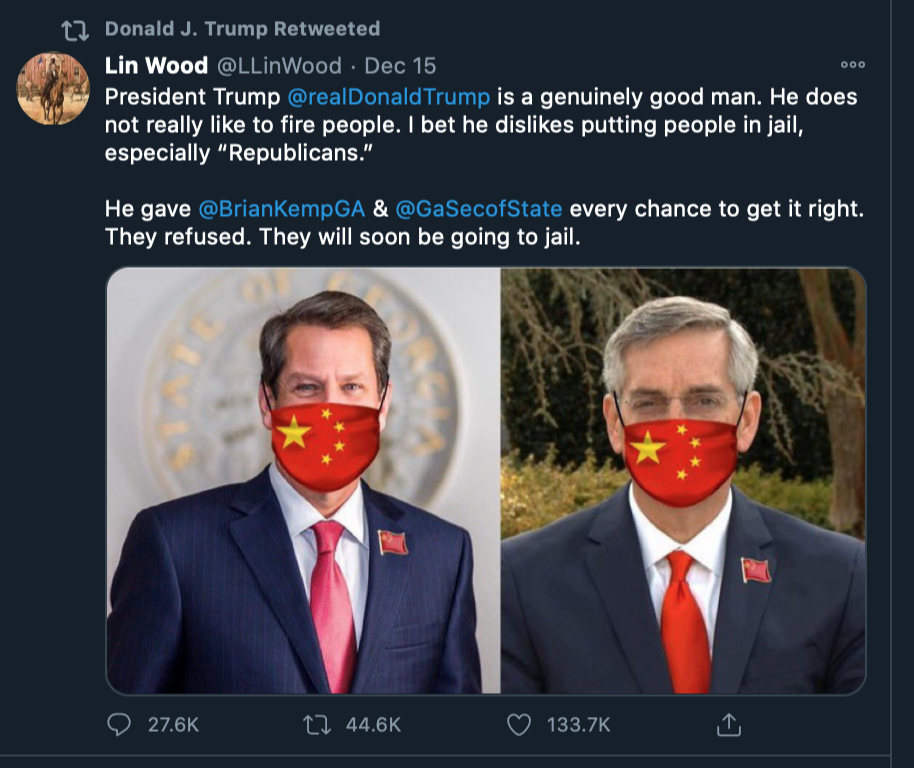 A small sampling of the negative reaction to Wood’s tweets are below (there seem to be many more which were receptive to what he had to say).

I can’t stand John Roberts, but I need more than Lin Wood’s tweets to believe what’s going around.

Watching loon twitter freaking out that John Roberts screamed SCOTUS could not take up the Texas cases and…oh, it just goes on. It's nuts. Its so disturbing when people who know nothing about law freak out because some guy says something online and so therefore its true.

To think that someone spent their precious years on the earth….for this particular moment. https://t.co/Qm6bcq3JFA

Now the 6-3 conservative US Supreme Court is in on the cover-up, the president's allies claim pic.twitter.com/XZElPHDNcV