Trump Raised a Massive $207.5 Million Post-Election Haul, and Little of It Is Going to the Lawsuits 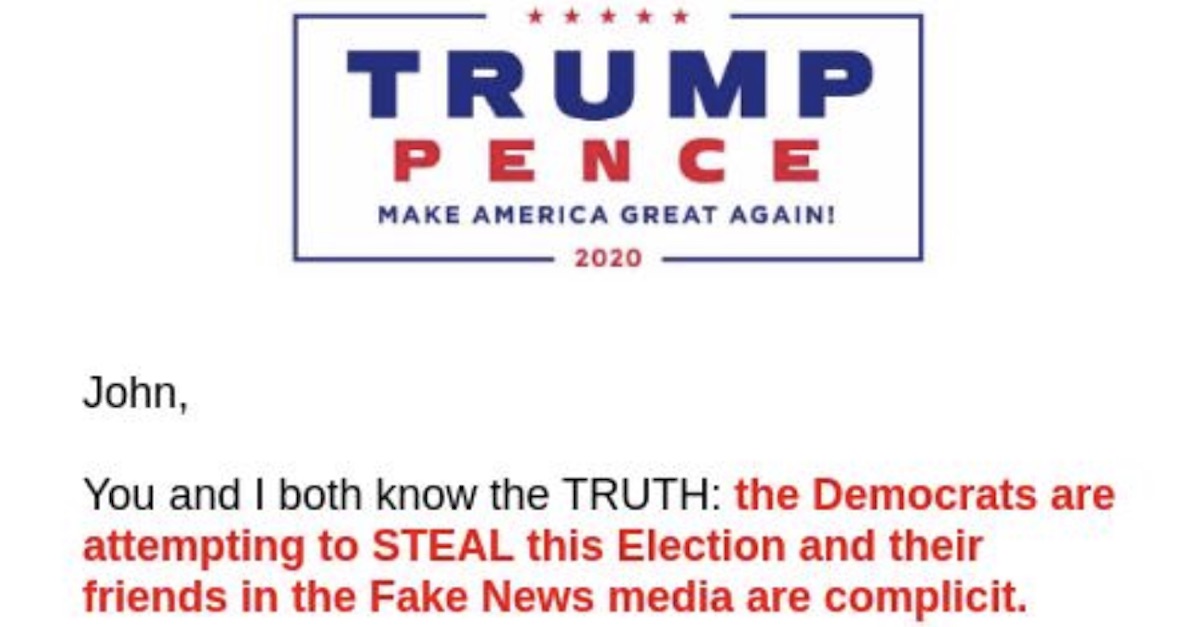 Lame-duck President Donald Trump’s first publicly available post-election filings seem to vindicate those who called his election-discrediting efforts a massive grift: Little of the $207.5 million that he has raised together with his committees and Republican allies has gone to lawsuits, but much of that haul has gone to cementing his post-White House hold on Republican leadership and his hotels.

“The reports so far seem to prove that Trump has been duping his small-dollar donors,” Campaign Legal Center’s Brendan Fischer told Law&Crime in a phone interview.

“Since Election Day, Trump has been raising millions and millions of dollars with fundraising appeals, asking for donations to a quote-unquote ‘Election Defense Fund,’ which doesn’t actually exist,” Fischer noted. “But the report filed last night show that the money raised largely has not gone towards those legal fees at all.”

Much of the money has gone toward the so-called leadership political action committee that Trump established to keep his grip on the Republican National Committee after he leaves office: “Save America,” which raised more than $549,000 in its first two weeks of existence.

For the Republican party’s national leadership, which has marched in lockstep with the outgoing president’s election-overturning efforts for nearly a month, Trump’s voter-fraud lies also have been a cash cow.

The Wall Street Journal reported early last month that half—or more—of the donation money goes to paying down campaign debts, and the Republican National Committee reaps up to 40-percent of some of these drives.

Released on Thursday night, the Federal Election Commission filings also show how Trump has rewarded the registered foreign agents whom he once promised to drive out of Washington but who became his top bundlers.

One of them, Florida-based lobbyist Brian Ballard, previously represented the Turkish government and Turkey’s state-run Halkbank, which is now awaiting a criminal trial for what prosecutors call a record-breaking money laundering scheme to Iran. That case has drawn scrutiny to what critics call Trump’s corrupt relationship with Turkey’s strongman Recep Tayyip Erdogan.

Ballard, whose firm collected a paycheck from that government for years and met with Lev Parnas in Washington’s Watergate Hotel the day before Trump’s inauguration, bundled $235,000 for the political action committee Trump Victory in the final weeks of the election cycle.

Trump nominated Ballard to the board of trustees for the John F. Kennedy Center for the Performing Arts on Thursday.

That figure does not include money paid to Trump properties by Trump Victory, a joint fundraising committee benefits nearly two dozen national and local Republican parties and entities.

That political action committee spent more than $1 million on Trump businesses in the recently disclosed filings, including $294,019.95 on facility rental and catering services at New York’s Trump Tower on Nov. 12, after Trump lost the race to President-elect Joe Biden. It also gave Trump’s son Donald Trump, Jr. a $720.37 travel reimbursement that same day.

Some money, though relatively little, has gone to legal fees, like the campaign’s $250,000 marked as debt or obligations to the firm Smith & Liss, which represented Lin Wood in a federal lawsuit in Georgia where a Trump-appointed judge refused to block certification of the election results.

On top of finding the claims meritless, U.S. District Judge Steven Grimberg ruled that Wood lacked standing. Wood’s attorney Ray Stallings Smith III disclosed at the time that he was retained by the Trump campaign in order to change the judge’s mind, in a case currently under review by the 11th Circuit.

Fischer, from the Campaign Legal Center, estimates that Trump and the Republicans spent roughly $14 million on legal and recount fees.

[screengrab from the Archive of Political Emails]