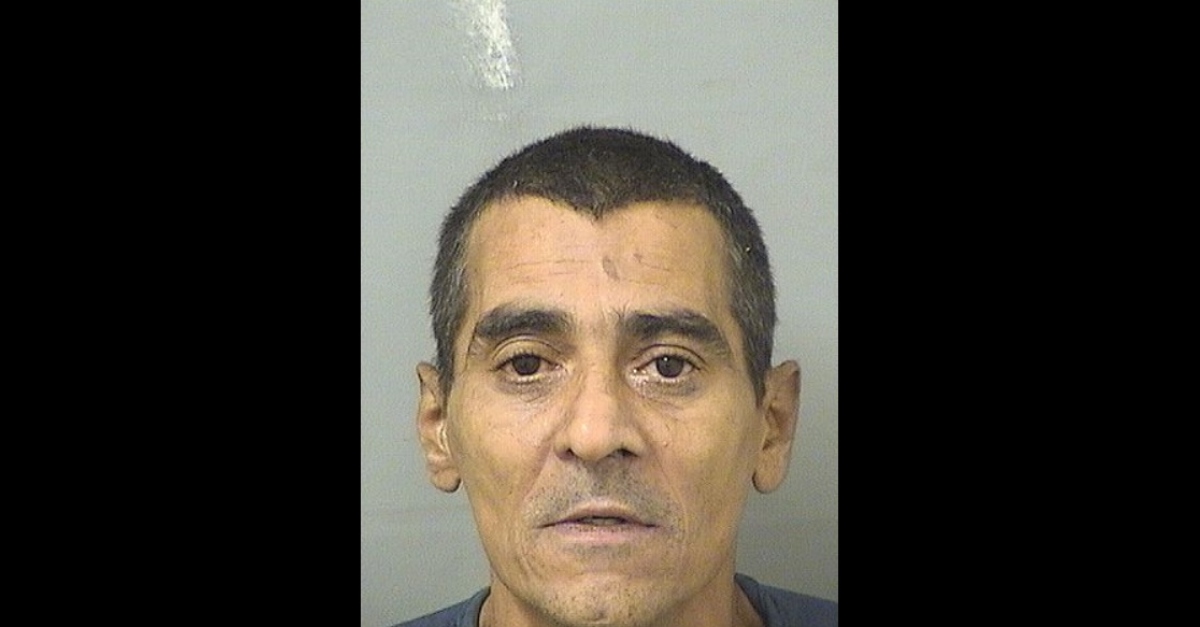 A man in Lantana, Florida allegedly went into a jealous rage and lit a woman on fire because she began a “romantic relationship” with his stepfather. Luis Angel Quinonez, 53, was booked into the Palm Beach County Sheriff’s Office on Tuesday. Palm Beach County deputies say his target survived, but the details in this situation sound awful.

According to a probable cause affidavit obtained by Law&Crime, authorities responded to a report of a fire. Not only was the victim on fire, but a residence was in “heavy flames” as well. Deputies said the woman was taken to Delray Hospital with second- and third-degree burns. Witnesses reported seeing her running from the home while covered in flames. Her skin was peeling, they said.  The defendant was allegedly seen bypassing the burning woman and instead using a water hose to douse the burning residence. In this account, the woman said her attacker had poured gasoline on her and set her on fire.

Deputies said they detained Quinonez. They claim he admitted to the crime after being read his Miranda rights. He allegedly said that his mother had passed away a month ago, and that the victim had been her caretaker. The woman lived with them for years, moved out, then returned again within the last eight months. In this account, she lived as a renter in her own bedroom, and Quinonez’s stepfather lived in the outbuilding.

The defendant allegedly learned the woman had been sleeping with his stepfather, and he lost it, on top of other problems in his life. He drank some alcohol, and told the former caretaker to leave, and that she better not be home when he returned. Quinonez allegedly admitted to going to a gas station, filling up what deputies described as an “unknown apparatus,” and returning home. The woman was still there. Quinonez allegedly then poured gas on her in her bedroom, and started a fire using his lighter.

The defendant allegedly said that he had never been in a sexual relationship with the woman, but said he loved her and that he wished he killed his stepfather instead.

It sounds like no one is going to be living in the residence anytime soon. Deputies described the windows being melted and smashed. The interior was all black from the fire and soot. The floors had been caved in, there were mounds of ash everywhere, and the appliances were “disintegrated.’

Quinonez is charged with attempted first-degree murder. His attorney of record did not immediately respond to a Law&Crime request for comment.