Trump Knows His Lawsuits Don’t Stand a Chance, But He’s Using Them to Raise Money for His Next Move 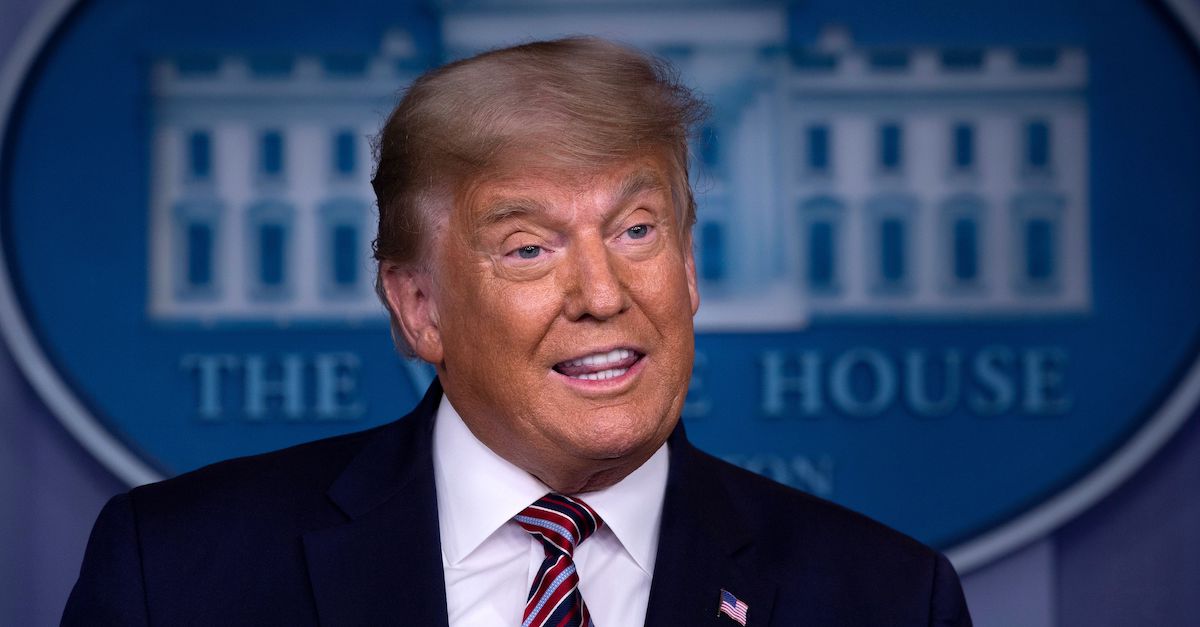 In public, the Trump campaign is soldiering on and fighting a few remaining legal battles out of dozens originally fought and lost. Behind the scenes the 45th president and his team know it’s over in all but name, but they’re still exploiting faithful donors who remain convinced Trump’s political salvation is soon at hand.

According to the Wall Street Journal, the president is personally aware that the broader effort to overturn the 2020 election results is “effectively over” and is looking forward to “his next act.”

But that next act will need to be funded. And for those funds, Trump and his allies are looking to the MAGA world’s pockets while filling their heads with fanciful ideas about the integrity of the U.S. election system and ever more fantastic claims that the president’s legal efforts have, and will, produce a meaningful work product.

“RIGGED ELECTION!” the president tweeted in all caps on Wednesday afternoon, reiterating his longstanding and false claims about widespread electoral and/or voter fraud.

On Thursday, Trump shared a poll which suggests that 79-percent of his own voters believe what he’s been saying: that the election was stolen by Democrats who failed to steal things well enough to obtain a Senate majority or control of several key state legislatures.

“They are 100% correct, but we are fighting hard,” the president opined. “Our big lawsuit, which spells out in great detail all of the ballot fraud and more, will soon be filled. RIGGED ELECTION!”

Clocking the president’s timeline since he lost the election to Joe Biden reveals an array of such claims; an adamantly expressed belief that unlawful shenanigans occurred; an apparently feigned belief that lawsuits filed by Jenna Ellis, Rudy Giuliani and Lin Wood stand a whelk’s chance in a supernova of upending the outcome; and mischaracterizations of minor and technical court room victories that apparently augur well for those election-altering efforts.

The fact is, however, the campaign’s legal efforts have been a massive, collective failure. And, still, the money keeps flowing.

And the president’s donor base continues to foot the bill based on the false promises being delivered more than daily to their inboxes.

From that story by WSJ’s Rebecca Ballhaus and Catherine Lucey:

People close to the president don’t expect him to formally concede or acknowledge that he lost the election at any point. Mr. Trump’s lawyers, they say, will likely keep up the appearance of a fight until the Electoral College holds its formal vote on Dec. 14. The campaign has sent dozens of emails a day seeking to raise money by citing the legal fight, a portion of which is going to a leadership PAC the president controls.

“Most donations to Trump’s so-called ‘election defense fund’ are not going to be used for his post-election legal fees at all,” explained Campaign Legal Center’s Federal Reform Program Director Brendan Fischer in an email to Law&Crime. “The fine print shows that the vast majority of every small donation to the ‘election defense fund’ is actually going to Trump’s newly-created leadership PAC, which he can use to finance his political activities after leaving the White House.”

“Small donors who give to Trump thinking they are funding his fight against a ‘rigged election’ are in fact helping fund Trump’s post-White House political operation,” Fischer added.

As Law&Crime previously reported, legal experts have long warned about the Trump campaign’s advertised legal efforts being used as subterfuge to cover other expenses. And while maintaining a successive series of unsuccessful lawsuits in various courts across the country is likely too costly to translate into real short-term profits, the ecosystem developed by alleging fraud and then funding nonstop challenges—however dead-end such challenges are—is all but certain to be a long-term boom and economic bonanza for the one-term president.

Those motivations, on the other hand, stand to become more transparent as the reality of Trump’s loss and the lack of substantiated fraud actually sinks in.

“I am all for questioning the validity of elections when legal grounds actually exist,” former prosecutor and current defense attorney Julie Rendelman told Law&Crime in an email. “We are way beyond that at this point as the bulk of Trump’s claims appear to be made out of whole cloth. We are left to assume that his campaign’s questionable continued efforts to raise money for this ‘legal fight’ are yet another attempt to keep Trump relevant and further divide our country.”