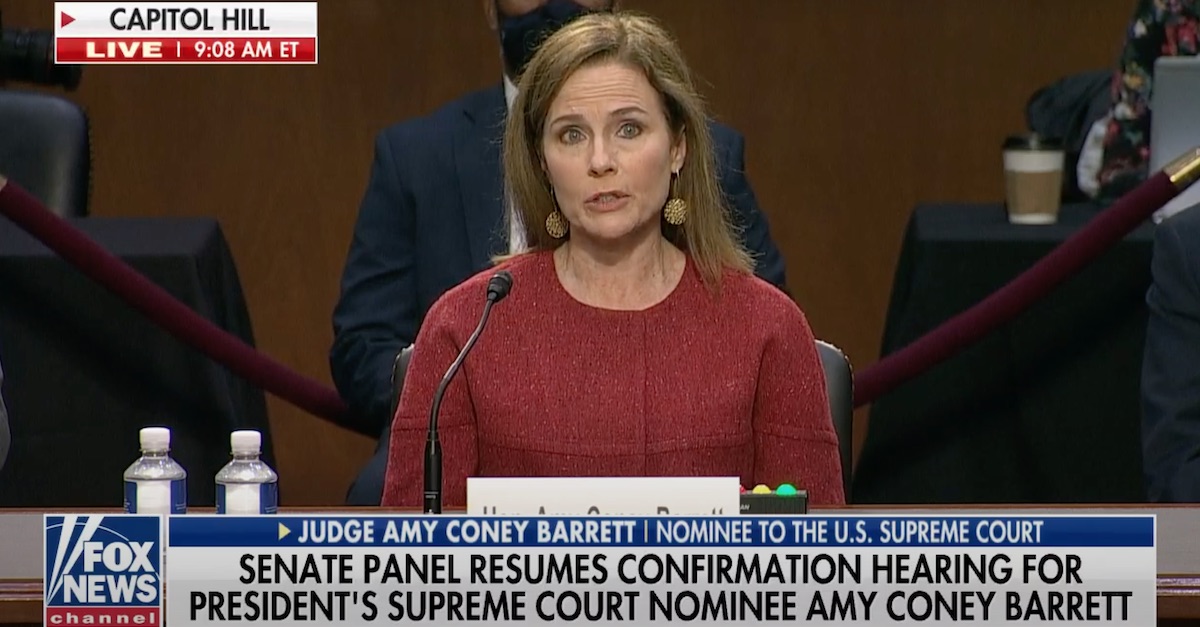 Pennsylvania Democrats filed a brief with the U.S. Supreme Court opposing Pennsylvania Republicans’ last-ditch effort to overturn a state Supreme Court ruling that extended a deadline for receiving and counting mail-in ballots up to three days after Nov. 3.

The brief was filed on Sunday; Amy Coney Barrett is expected to be confirmed to the Supreme Court on Monday. Barrett may even be sworn as soon as late Monday or early Tuesday. This may very well be of crucial importance for the GOP’s petition for certiorari and request for expedited oral arguments.

As Law&Crime noted before, the Supreme Court’s rules say that five justices must vote in order to grant a stay. Here we had a 4-4 tie. Only four justices are needed to grant a petition for a writ of cert, but that number goes up to five when the ask is an expedited appeal—as is the case here. In summary, Barrett’s confirmation and swearing in is imminent and could be the decider, one way or another, on whether the U.S. Supreme Court takes up the Pennsylvania GOP’s case—on an expedited and emergency basis—before the election (assuming that the lineup of justices who voted for and against the stay application remains the same).

Of course, one easy way to avoid putting her in that position would be if one of the four Justices who would've granted a stay last week (Thomas, Alito, Gorsuch, or Kavanaugh, JJ.) nevertheless votes to deny the motion to expedite. That would presumably allow Barrett to stay out.

Likely cognizant of the Barrett factor, Democrats argued on Sunday that the U.S. Supreme Court should not touch the state Supreme Court’s ruling this late in the election game [emphasis theirs]:

There is no conceivable reason why this Court should reverse course and agree now—mere days before Election Day—to RPP’s rash and unseemly request that it intervene in the electoral process in such a disruptive and unfair way. With the ability to provide meaningful pre-election clarity to voters and election officials now gone, this Court’s election-eve intervention would only guarantee confusion and disruption. And it would do so without anything close to a real need for such precipitous action. It is far from clear how many ballots—those received between 8:00 p.m. on November 3 and 5:00 p.m. on November 6—will even be at issue, and indeed no reason to assume that it will be a sufficiently large number to change the result. This Court should therefore deny RPP’s extraordinary and unjustified request for expedition. At this late date, the Court should allow Pennsylvania to hold its federal elections under the existing rules.

Indeed, the only circumstance that has actually changed—27 days have passed since RPP’s initial stay application, and Election Day is now only 9 days away—necessitates denying RPP’s requested relief.

“By judicial fiat, that decision removed the principal method by which Pennsylvania structures its post-election process, permitting votes to be cast after Election Day and counted after Election Day,” the Republican lawmakers wrote. “By doing so, the decision creates multiple election days after November 3, 2020, in violation of federal law since votes can be cast (i.e. voted) after November 3, 2020. The decision also usurped the Pennsylvania General Assembly’s constitutionally-delegated authority to set the times, places, and manner of federal elections in Pennsylvania. This was done without any delegation of power to the state’s Supreme Court or legislative consideration whatsoever.”

Democrats answered on Sunday that it would be “unthinkable” that “such weighty issues would be fully briefed and conclusively decided in just a few days” at SCOTUS. In addition, they argued, any such last-minute upsetting of the applecart would be “severely unfair” to both Pennsylvania voters and election officials.