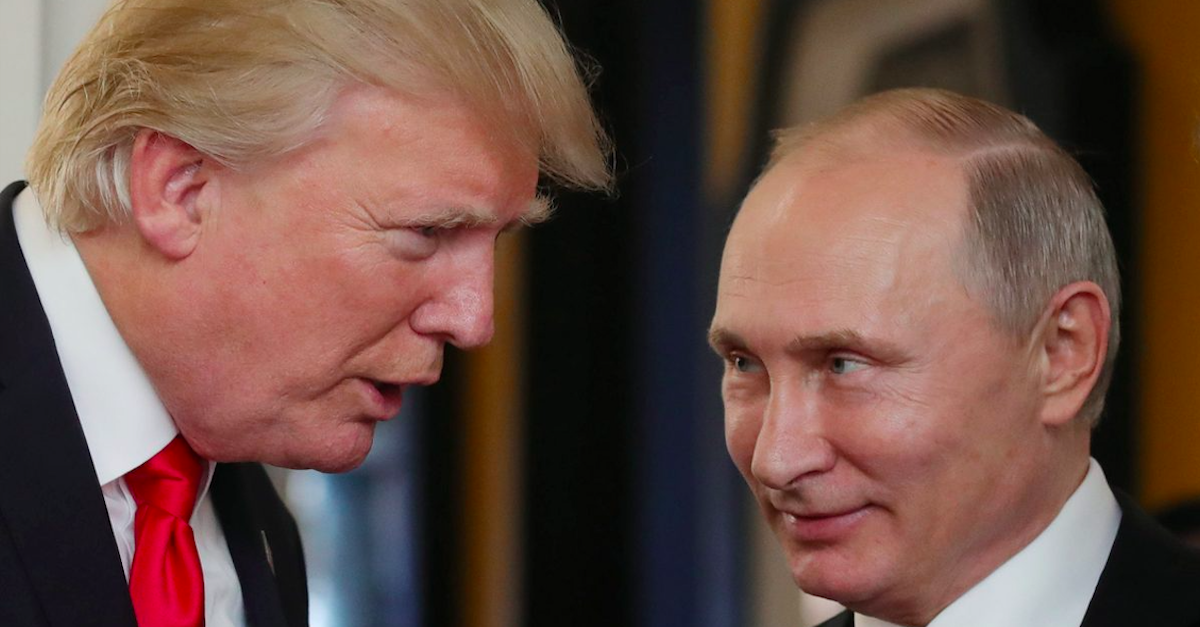 Now embroiled in its third week of what even mainstream political commentators now call a slow-motion coup d’etat attempt, the United States never has seen a legal offensive to consolidate power quite like the one waged by the White House’s soon-to-be-evicted tenant: President Donald Trump. Other countries have, though—particularly authoritarian regimes.

“Democracy can die through the use of courts and lawyers and bureaucrats,” New York University’s preeminent fascism scholar Ruth Ben-Ghiat, the author of the book Strongmen: Mussolini to Present, told Law&Crime in a 15-minute video interview.

Beyond his well-reported affinity for the likes of Turkey’s Recep Tayyip Erdogan and Russia’s Vladimir Putin, Trump shares another common bond with strongmen: relentless bullying through meritless litigation.

“Exhausting people and running out the clock and destabilizing things through lawsuits is the way they roll,” Ben-Ghiat said. “All of them have Wikipedia pages dedicated to their lawsuits quite apart from their personal Wikipedia page because they’ve all engaged in thousands of lawsuits against people.”

In the introduction of her new book Strongmen, Ben-Ghiat points to what might be called a recent precedent for Trump’s election-overturning playbook. In March 2019, Turkey’s ruling Justice and Development Party reacted with horror to opposition leader Ekrem Imamoglu‘s election as Istanbul’s mayor, a post that weakened their chokehold on power with political control of the country’s economic engine. So the losing party went to a pliant judiciary and secured a re-do election—which Imamoglu won again handily.

The Turkish opposition leader now retains power in the country’s largest city, after a brazenly anti-democratic gambit by the ruling regime crashed and burned before the eyes of the world.

Today, even Erdogan recognizes President-elect Joe Biden as the winner of the 2020 presidential election. Trump and the vast majority of his Republican party and its leaders have instead chosen to follow in Turkey’s shocking path of just more than one year ago.

“We’re in uncharted territory in this regard, and yet it’s familiar territory in other countries,” Ben-Ghiat noted.

Unlike Erdogan’s cowed court system, the U.S. judiciary remains stubbornly independent, even after some 200 federal judges and three Supreme Court justices were appointed by Trump.

Around the country, courts have handed Trump’s campaign a string of humiliating losses, most recently in a blistering ruling eviscerating the “Frankenstein’s Monster” legal theories of Rudy Giuliani. Trump’s legal team hemorrhages lawyers by the day and keeps backing off from their baseless accusation of voter fraud when pressed by judges. Even one of Trump’s appointees rejected a meritless lawsuit filed by an ally seeking to block certification of the Georgia results.

For authoritarian personalities, the professor says, victory is not the only goal in litigation.

“They tie up people’s finances,” Ben-Ghiat notes. “They psychically exhaust people by taking them to court, or by trying maneuvers that then it’s the burden on the court to push back.”

In Biden’s positivity, Ben-Ghiat sees a strategy for resisting this authoritarian onslaught. In opposing an Erdogan loyalist, Imamoglu ran on a slogan of “radical love,” and Chile turned the corner from slaughter, torture and tyranny of Augusto Pinochet through a campaign that embraced the slogan: “Joy is coming.”

Biden has insisted upon compromising with the Republican Party despite their refusal to acknowledge him as President-elect. For Ben-Ghiat, this seemingly “Pollyanna-ish” approach has sound historical precedent.

“I think there are there instances in history when the time is right to use positive emotions and solidarity and compassion to try and get through to people, because the alternative is giving up,” she said.

Trump will likely remain a courthouse fixture in his post-presidency. The cloak of immunity that he enjoyed in the Oval Office will be gone.

Even if he pardons himself for federal crimes—and a Republican-appointed majority on the Supreme Court legitimizes that—Trump cannot sign an order to rid himself of Manhattan District Attorney Cyrus Vance’s (D) fraud investigation in New York State. Special counsel Robert Mueller’s report teed up several possible obstruction of justice counts that a Biden administration could potentially pursue, and Vice President-elect Kamala Harris clamored for that outcome in the Democratic primary—a position she later abandoned amid a firestorm of criticism for apparently prejudging a future Justice Department investigation.

How a strongman’s fear of prosecution and imprisonment has led to democracy’s collapse is a story as old as fascism itself—with Mussolini.

“He had ordered the his main opponent assassinated: the head of the Socialist Party,” Ben-Ghiat said. “A special investigation was opened that was going to send him to jail, and he declared dictatorship to shut down this investigation.”

Those who find that scenario far-fetched or hyperbolic could be likened to the Italians who also believed it to be unthinkable for former Prime Minister of Italy Silvio Berlusconi, another mogul-turned-politician known for leaving office under a cloud of possible criminal liability.

Berlusconi would face trial after trial for such charges as tax fraud, bribery and soliciting sex with a minor. Only the first of those charges would ultimately stick.

“Their biggest incentive is to avoid prosecution,” Ben-Ghiat said, referring to strongmen generally. “That’s also why they surround themselves with their families—people they trust and can keep their secrets—and then the families are complicit too.”

The swirl of criminal suspicion surrounding the leaders springs from what Ben-Ghiat identifies as another historical through-line: corruption masquerading as anti-corruption.

“Mussolini was the first one to talk about draining the swamp, and then he ended up as corrupt as all of the others,” Ben-Ghiat said, calling this feature useful in maintaining power.

“Corruption is also really important in getting the collaboration of elites,” she observes. “So the way that Trump has domesticated the GOP is astonishing but very predictable. They use bullying. They use intimidation. They use blackmail to make sure that people keep their secrets.”

More than two weeks after Biden clinched his victory, only a handful of Republican senators have recognized it. The White House and its allies reportedly tried to pressure governors, secretaries of state, and election officials in Georgia, Arizona, Michigan and Pennsylvania. Two of those states—Michigan and Pennsylvania—will vote Monday on whether to certify those results, removing any fig leaf standing in the way of formally recognizing Biden’s status as the next president of the United States.

“Once authoritarians come into office, it’s very hard to get them out,” Ben-Ghiat noted. “They’re invested in staying there because of corruption, because of the power, and temperamentally they are unable to conceive of life without having power and control of great state resources. So, the very personal qualities that let them get to power—they’re ruthless; they’re arrogant; they know how to bully—make it difficult for them to leave, even if they haven’t destroyed democracy.”

“So what Trump’s doing now is also typical of 21st century leaders who get into elections and then they manipulate elections to stay there,” Ben-Ghiat added.

Biden won the popular vote by more than six million people and 74 electors.