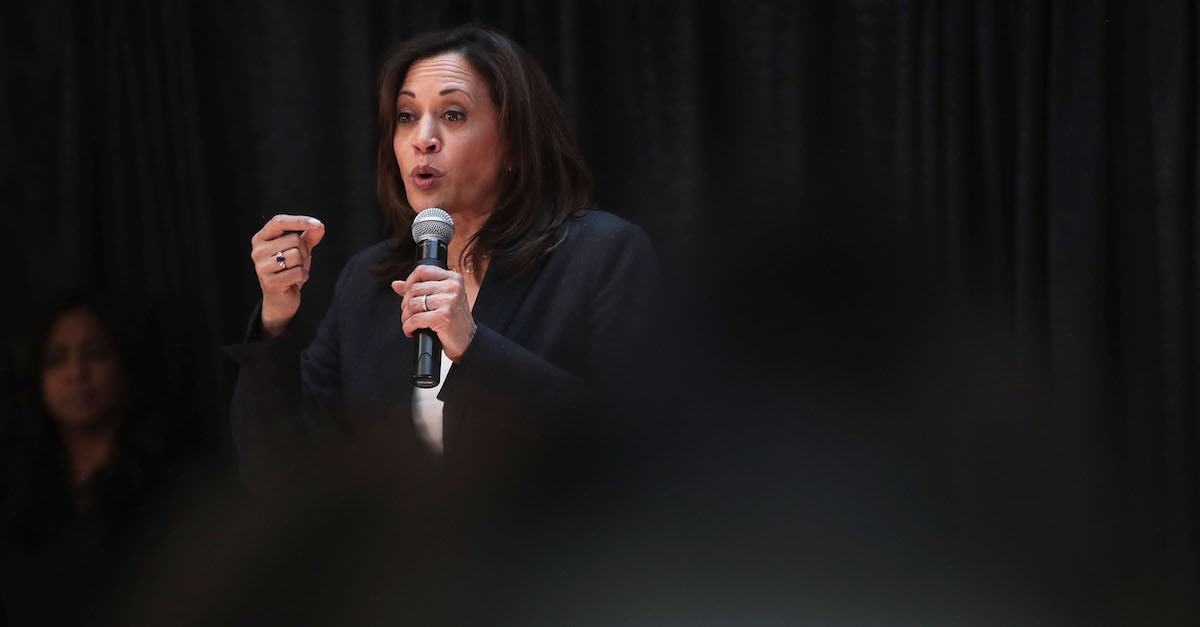 While some Democrats running for president in 2020 have opted to call for President Donald Trump‘s impeachment, Sen. Kamala Harris (D-Calif.), a career prosecutor, said that if she’s is elected she believes her Department of Justice “would have no choice” but to pursue obstruction of justice charges against Trump. Harris made the comments on NPR Politics’ Podcast, and they haven’t exactly been universally well-received by her legal peers.

But first — here’s what she said:

“I believe that they would have no choice and that they should [pursue charges], yes.”

“There has to be accountability,” Harris added. “I mean look, people might, you know, question why I became a prosecutor. Well, I’ll tell you one of the reasons — I believe there should be accountability. Everyone should be held accountable, and the president is not above the law.”

“I do believe that we should believe Bob Mueller when he tells us essentially that the only reason an indictment was not returned is because of a memo in the Department of Justice that suggests you cannot indict a sitting president. But I’ve seen prosecution of cases on much less evidence.”

Okay — now that we’ve got that out of the way: legal observers immediately criticized Harris for promising to prosecute a political opponent. Where have we seen this before? Ah, yes: then-candidate Trump called for Hillary Clinton to be locked up.

I agree with @jedshug that this was a bad answer by Harris. Say you’ll have an AG with integrity to review it and make a determination. Don’t say as president you will prosecute your opponent.

This is a disappointing error. A lesson from the Trump era is that presidents should not be involved in the DOJ's specific prosecution decisions, especially of political rivals.
The answer should be: "I'll nominate an AG w/ integrity who would look carefully but independently." https://t.co/BqdJmHAZ3P

Others, however, said that we have a case of apples and oranges on our hands.

This is really inappropriate. If candidates are committed to rebuilding the independence of the Justice Department, this is not the road to go down. https://t.co/TjGUE3DQW0

Setting aside it being terrible for democracy—and it is—it’s strategically unwise for a political candidate to announce an intention to prosecute a political opponent. It hands that person a defense motion.

If you believe that someone deserves prosecution, you should do your best to encourage your favored candidate to keep quiet about it.

Presidential candidates should not express their opinion as to whether Trump should be indicted after he leaves office.

(Among other things, it could be the basis of a motion by Trump down the line if he is ever charged.) https://t.co/TTIZy0waEc

The best approach would be to pledge to leave the question of prosecuting Trump (after he leaves office) to career prosecutors. If any political figure is indicted or investigated, it is important to do whatever possible to insulate that decision from political considerations.