‘Rolling Over and Showing Your Belly’ May Not Spare Fox News and Newsmax from Smartmatic Lawsuit, Legal Expert Says 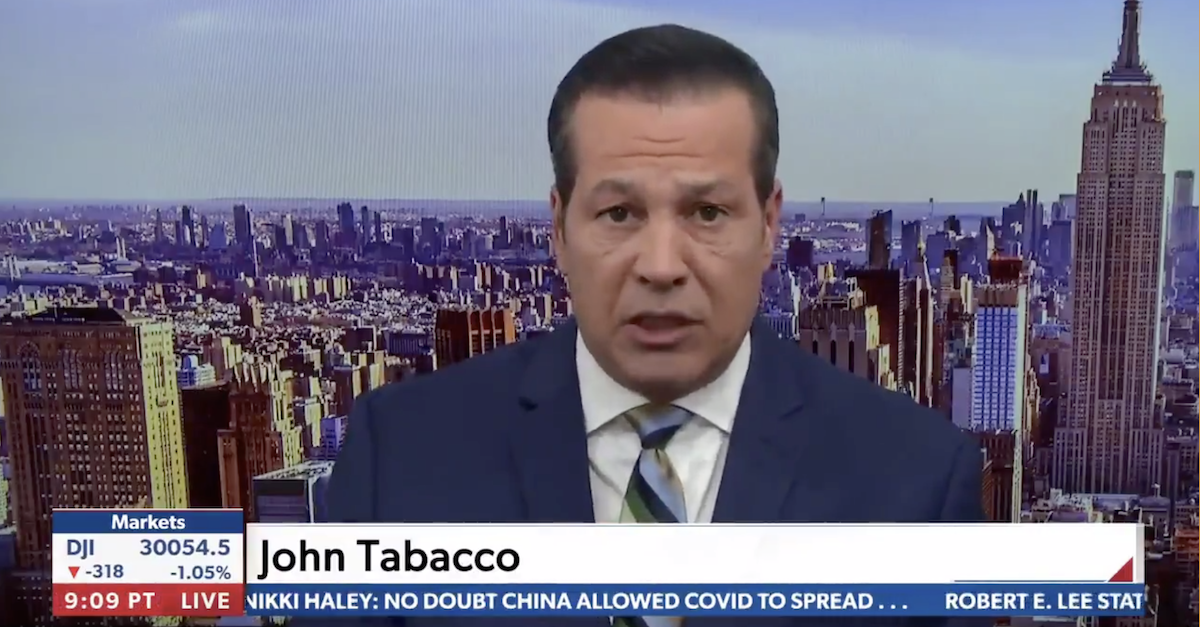 Newsmax followed suit on Monday in a remarkable speech by host John Tabacco, insisting that the network never endorsed smears of the voting machines but offering a point-by-point refutation of the attacks made.

A key point here is that Fox can handle a drawn out, expensive lawsuit. For Newsmax and OAN, burning cash and looking for investors, it would be existential. https://t.co/lr3JKuXE40

In an extended phone interview with Law&Crime, attorney Ken White—the civil-libertarian host of the podcast Make No Law widely known by the legal nom-de-plume Popehat—questioned whether the segments will avoid or mitigate the potential fallout.

“It’s kind of a way of rolling over and showing your belly and hoping that they’ll accept that,” White said. “And it was, I thought, somewhat humiliating the way they did it.”

“It can cut off damages to some extent, so you can say that afterwards, ‘We put the truth out there, and therefore, there were no continuing damages from what we said before,'” White added.

Whether amounting to a formal mea culpa or not, Fox was first to respond to Smartmatic’s retraction demands. On Monday, Newsmax went a step farther than Fox in calling its fact-check an effort to “clarify” the record.

Wow. Newsmax is walking back its conspiracy theories to avoid a lawsuit. This goes further than Fox News did.
“Neither Dominion nor Smartmatic has any relationship with George Soros. Smartmatic is a US company and not owned by the Venezuelan government.”pic.twitter.com/T7XuiBOcHy

White questioned the value of the limited walkback from Newsmax.

“I’m not sure you can unring a bell in this media environment with a retraction or with, frankly, the population that’s looking at Newsmax and OAN,” White noted, in an interview conducted shortly before the Newsmax clarification.

“I think they’re in big trouble, given the sort of very simply factually wrong allegations that are being made,” White said, referring to Newsmax and OAN. Ben Smith noted that, unlike Fox, Newsmax and OAN would not be in the same financial position to fend off the potential existential threat that protracted litigation represents.

Although it is rare for a First Amendment advocate to comment confidently that a possible defamation claim is strong, White believes there are some clear false statements of fact.

“Defamation is hard to prove typically, and usually if it’s about politics, there’s a lot of wiggle room to say that it was a rhetoric and opinion and not a statement of fact,” White noted. “That’s not the case here.”

As of press time, OAN and right-wing lawyers Sidney Powell and Lin Wood have not backed down, with Wood going so far as to tell Smartmatic’s counsel on social media: “File your lawsuit.”

White wondered if this is all be part of a fundraising plan.

“Look, this situation has a lot of very colorful people, and there there are strong reasons to believe that their larger-than-life behavior is planned, and part of the reason that they’re doing it is to get attention and fundraising, that sort of thing,” White said, adding that Wood’s recent behavior has forayed into the “family-and-friends-check-in-on-him level.”

This will be a train wreck.https://t.co/A4904FJjOp

Claiming to represent Powell in this action opens other potential issues for Wood.

“You can’t sue someone for defamation because they said in a pleading something false, but [Wood]’s also been out in the media promoting all this wild nonsense,” White noted. “So it’s gonna be an issue for him both to be potentially a defendant in some of this—or at least a witness—and being a person purporting to represent Powell.”

Dominion Voting Systems has also threatened litigation against Powell and her team, demanding that she preserve records of communications with Wood, the Trump campaign, Rudy Giuliani, Jenna Ellis, and even reporters, editors, bloggers and cable news hosts.

Fox News referred Law&Crime to the fact-checks and declined comment beyond that. OAN and Wood did not immediately respond to emails requesting comment.