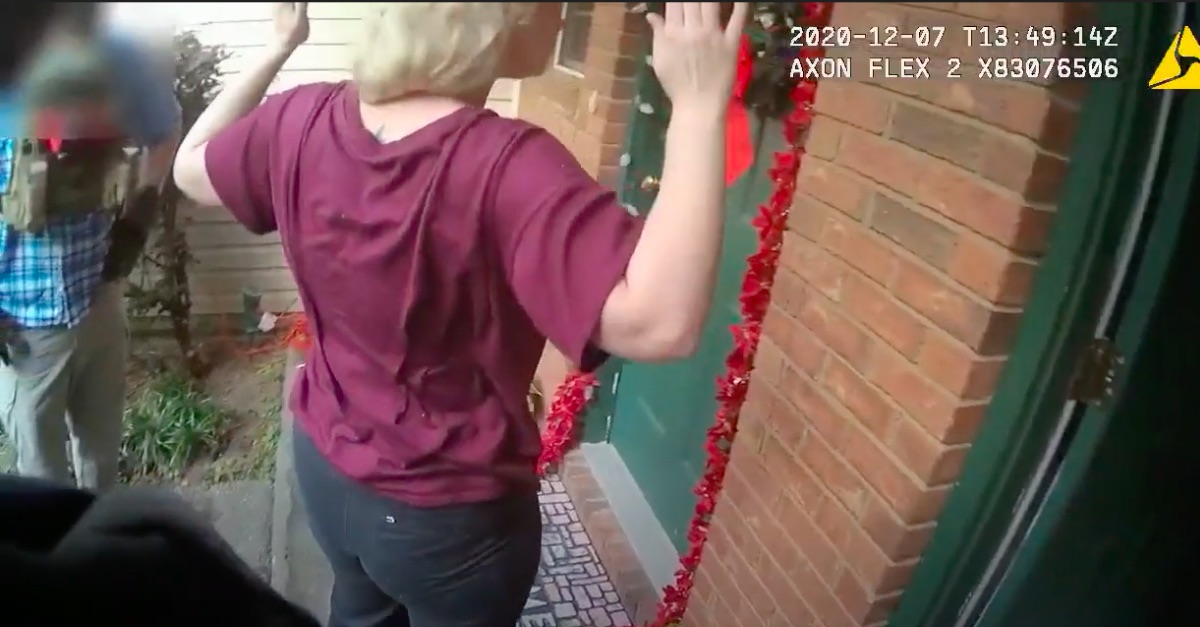 Less than two weeks after dramatic footage of a raid on her home electrified social media, former Department of Health scientist Rebekah Jones filed a lawsuit accusing Florida authorities of terrorizing her family earlier this month in retaliation for blowing the whistle on pressure to cook the Sunshine State’s coronavirus data.

Generating more than 10 million views and hundreds of thousands of retweets and likes, Jones’s security camera footage of armed officers entering her house with guns drawn garnered major media attention on CNN and other networks.

Her lawsuit filed on Sunday evening sets the stage for those who missed the viral video.

“On December 7, 2020, plaintiff Rebekah Jones awoke to the sound of law enforcement pounding on her door. They entered her home with guns drawn, terrorizing her family,” the complaint states. “They were there to execute a search warrant for her electronics devices; however the basis of the warrant was a sham to punish Plaintiff for her protected speech. Her termination from the Florida Department of Health after refusing to falsify data generated a great deal of media coverage much to the dismay of the State.”

The officers were serving a warrant obtained after the state’s health department filed a complaint related to an unauthorized user accessing its emergency messaging system last month. A message sent through the system urged employees to “speak up before another 17,000 people are dead.”

Earlier this year, Jones had been serving as the department’s data manager when she claimed that the Deputy Secretary for Health instructed her to “manipulate” the coronavirus case data the state was using to justify lifting its stay-at-home orders early. She has denied any involvement in sending the message through the emergency system.

Despite her ouster from state government, Jones continued to be a thorn in the side of Republican Florida Gov. Ron DeSantis’s administration, setting up her own website that independently publishes coronavirus statistics and issues warnings which she calls more accurate than the data released by the state.

The lawsuit—filed in Leon County’s Second Circuit Court—names Florida Department of Law Enforcement (FDLE) Commissioner Rick Swearingen, Officer Noel Pratts, the ranking officer in charge of the investigation, and an anonymous officer on the scene who allegedly “committed a battery on Plaintiff by repeatedly running his hands up and down her ribs and by gripping and holding her sides.”

Jones is seeking “damages and equitable relief” in excess of $100,000, claiming the raid was illegal under state law and constituted violations of her rights under the First, Fourth, and Fourteenth Amendments of the U.S. Constitution.

Rick Johnson, one of Jones’s attorneys, told the Tallahassee Democrat that the police raid of his client’s home was something that happens in authoritarian countries, not the United States.

“We are trying to achieve some kind of redress,” Johnson said. “This is still America. This is the kind of thing that happens in tinhorn dictatorships in third world countries.”

Swearingen defended the FDLE in a statement Monday.

“As I have said before, I am proud of the professionalism shown by our FDLE agents as they served a legal search warrant on the residence of Rebekah Jones. Our criminal investigation continues, and while I have not seen this lawsuit, I believe the facts will come out in court,” Swearingen said.

Law&Crime reached out to FDLE for comment but had not heard back at the time of posting.

“It is well known that IP addresses can be spoofed. In other words, I can make an IP or I can make it look as though Internet traffic is coming from somewhere else,” Kevin Butler, the associate director of the Florida Institute for Cybersecurity Research and a professor of computer science at the University of Florida told Florida Today.

Butler further explained that making an IP address appear as though it’s coming from somewhere else only takes a basic understanding of computer security.

“These types of attacks are things that, you know, my students in my undergraduate security class are aware of how to do,” he said. “The idea that somebody would be immediately, or individually identifiable just sort of goes out the window with regards to a username and password. If those are all shared then holding any one person accountable based on the account details, it’s not possible.”

See below for the filed complaint.