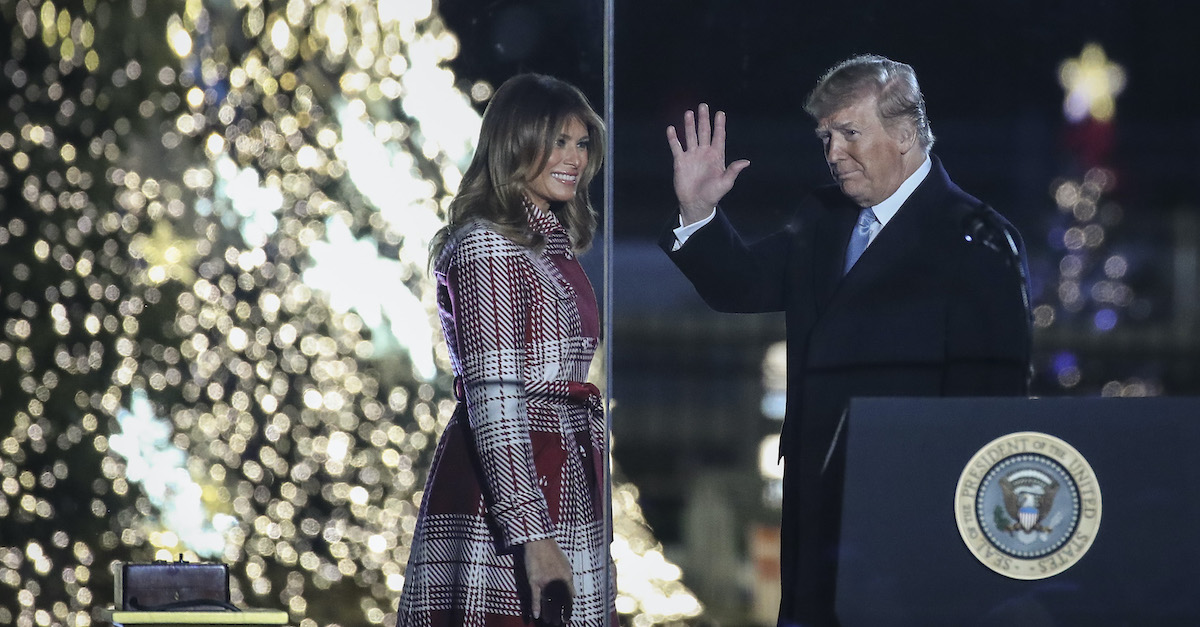 First Lady Melania Trump’s former friend and advisor Stephanie Winston Wolkoff on Monday filed a memorandum in support of dismissing the Department of Justice lawsuit which alleged that Wolkoff violated “contractual obligations and fiduciary duties.” Wolkoff’s lawyers began by calling the DOJ lawsuit a “meritless” attempt by FLOTUS and President Donald Trump to use government lawyers to “pursue entirely personal goals and interests”—namely, punishing Wolkoff for penning the tell-all, Melania and Me: The Rise and Fall of My Friendship with the First Lady.

DOJ filed suit on behalf of the soon-to-be former FLOTUS in October, claiming that Wolkoff had violated a non-disclosure agreement and published “confidential government information without authorization.” The government, as it did in the John Bolton book case, attempted to seize Wolkoff’s profits and place them in a trust. According to Wolkoff’s lawyers, this case bears no resemblance to the Bolton case and for several reasons, which we will get into.

Recall: Wolkoff previously made waves by playing a recording of Melania Trump on CNN. In that audio, a frustrated first lady can be heard saying: “who gives a fuck about Christmas stuff and decorations?”

Additional audio revealed Melania Trump discussing the “I really don’t care, do u?” jacket that the first lady wore before visiting detention centers in Texas, where children who had been separated from their undocumented immigrant parents were being held.

“So what prompted you to want to buy that jacket?” Wolkoff asked.

“I’m driving liberals crazy. That’s for sure,” Melania Trump responded. “And that, you know, that’s — and they deserve it. You understand? Everybody is like oh, my god this is the worst. This is the worst. After, I mean come on, they are crazy. Okay?”

At the time, Stephanie Grisham said on FLOTUS’s behalf that “It’s a jacket” and “There was no hidden message.”

“After today’s important visit to Texas, I hope the media isn’t going to choose to focus on her wardrobe,” Grisham said.

The first lady said months later that the jacket was, indeed, “for the people and for the left-wing media who are criticizing me.”

“I want to show them that I don’t care. You could criticize whatever you want to say, but it will not stop me to do what I feel is right,” she told ABC News. “It was kind of a message, yes. I would prefer that they would focus on what I do and on my initiatives than what I wear.”

“It’s obvious I didn’t wear the jacket for the children,” she added.

Wolkoff also worked on the 2017 Trump inauguration and has since cooperated with investigations into inauguration committee spending. Wolkoff has also dished on Melania Trump’s use of private email accounts while first lady.

The DOJ filed suit over Wolkoff’s book, claiming the she violated her agreement. But Wolkoff’s lawyers now say the case should be dismissed for three reasons:

(i) the Government has no proper basis on which to claim that Ms. Wolkoff violated the Agreement, which terminated more than two years before the challenged conduct; (ii) the Agreement is void for lack of consideration; and (iii) the vague and overbroad confidentiality restrictions in the Agreement violate Ms. Wolkoff’s First Amendment right to freedom of expression.

The lawyers said that under the agreement Wolkoff was a “volunteer” not a government employee. In any event, the memorandum said, the DOJ failed to allege that Wolkoff “has had any contractual, agency, or other formal relationship with the First Lady or the government since the February 2018 termination [of the agreement]” [emphasis as it appears in the filing]:

The Complaint also specifies that the alleged violations occurred no earlier than July 2020, approximately 29 months after termination of the Agreement. See Compl. ¶¶ 32–34. In July 2020, Ms. Wolkoff received a demand letter from an attorney purporting to represent Mrs. Trump personally. After deficiencies in the theory asserted in that letter were identified by counsel for Ms. Wolkoff, the DOJ subsequently delivered its own demand letter, to which Ms. Wolkoff’s counsel responded by pointing out fundamental legal and factual deficiencies in the Government’s position. See Compl. ¶¶ 32–33. Despite these deficiencies, the Government subsequently brought this lawsuit.

Secondly, Wolkoff’s lawyers argued the agreement lacked “consideration,” which is “required to have a contract”:

Although Ms. Wolkoff received “access to the White House complex and equipment” and “email systems,” Compl. Ex. A ¶¶ X, XIII, that access was provided specifically in exchange for Ms. Wolkoff’s agreement to release the United States from any and all claims and to protect the security of certain accessed information. Id. The allegation in the Complaint that Ms. Wolkoff received additional consideration in the form of a “personal and professional opportunity,” Compl. ¶ 24, is inconsistent with the express terms of the Agreement.

Third, Wolkoff’s attorneys maintained that the attempted enforcement of the “extraordinarily broad and vague confidentiality provisions” of the agreement amounts to a violation of Wolkoff’s First Amendment rights. In other cases, such as the Bolton case, DOJ persuasively argued before a federal judge that former National Security Advisor John Bolton’s profits should be put in jeopardy.

“The United States alleges that Bolton breached both his fiduciary obligations to the government and his contractual duties by (a) publishing his memoir before completing prepublication review and (b) by disclosing classified information. To succeed on those claims, the government must show that Bolton was either obligated to complete prepublication review or to not disclose classified information,” Senior U.S. District Judge Royce Lamberth said in October. “Because the agreements imposed both obligations and because the government plausibly pleads that Bolton breached those obligations, the Court will deny Bolton’s pending motion to dismiss.”

The judge found that DOJ sufficiently pleaded that Bolton breached his contractual obligations by not submitting The Room Where It Happened for prepublication review. The government opened a criminal investigation into whether Bolton unlawfully disclosed classified information, compromising national security.

Wolkoff’s lawyers said there is no such issue in her case.

Perhaps recognizing this fatal flaw in its claims, the Government attempts to contort the First Lady’s personal interest in limiting negative publicity into a governmental interest in protecting the internal deliberations of the executive branch (which appears to be a claim of executive privilege, without actually using the phrase). The Government’s position is meritless because no such governmental interest can be asserted on behalf of a person who is not a government official.

No matter what role the First Lady has fulfilled “historically,” the Complaint rightfully does not—and cannot—claim that the First Lady is an executive branch official merely by virtue of her marriage to the President. She is not an employee of the United States government, she has no official responsibilities, and she “does not draw a salary for performing any of [her] functions[.]” That she is entitled to Secret Service protection, helps plan state dinners for visiting foreign dignitaries, or “supervise[s] renovations and improvements to the White House,” is of no consequence, except to show that the First Lady undertakes certain high-profile ceremonial tasks relating to matters of public concern about which private citizens are entitled to speak with the full protection of the First Amendment.

National Security and federal employment attorney Bradley P. Moss told Law&Crime the memo indicates the Melania Trump-DOJ lawsuit against Wolkoff “is and should be dead on arrival.”

“This motion outlines the inherent deficiency in having the Government bring this lawsuit on behalf of Mrs. Trump – the case law is explicitly clear that the government has no basis for censoring unclassified information former employees wish to make public,” he said.

Wolkoff’s lawyers asked that the court dismiss the case with prejudice, so that the claims therein cannot be brought again.

Read the memorandum below: