Dominion Voting Systems took one step towards legal action against Sidney Powell on Wednesday by sending a retraction demand letter, comparing the “Kraken” to “Big Foot” and the “Loch Ness monster.”

The company and its voting machines, it says, have been the target of relentless and “reckless disinformation” campaign, led by Powell, Rudy Giuliani, other allies of President Donald Trump, and Trump himself.

Just days ago, Smartmatic, threatened to take legal action against Fox News, Newsmax and One America News. Smartmatic is also demanding retractions, but threatened defamation lawsuits as it hemorrhages business amid an onslaught of attacks.

“The Dominion Voting Systems, the Smartmatic technology software, and the software that goes in other computerized voting systems here as well, not just Dominion, were created in Venezuela at the direction of Hugo Chavez to make sure he never lost an election after one constitutional referendum came out the way he did not want it to come out,” Powell asserted in November, alleging a conspiracy funded by “communist” money to steal the election from Trump and hand it to Joe Biden.

Dominion has said none of that is true, and news reports have noted that Trump won an overwhelming majority of counties across swing-states that used Dominion Voting Systems:

Near the end of November, Dominion made a statement saying that Powell’s “error-filled,” “baseless” and “demonstrably false” claims had led to death threats and other crimes against Dominion employees. In the same statement, Dominion responded in bullet-point fashion to various assertions.

The company said it was not “founded by oligarchs and dictators,” had “no ties” to the Venezuelan government or any foreign government, no relationship with Smartmatic, no operations in Germany, and more:

Dominion was not “founded by oligarchs and dictators.” It was founded in Toronto, Canada, and it is now a proud nonpartisan American company. Dominion has attested to its ownership—under penalty of perjury—to local, state, and federal agencies, including the Committee on Foreign Investment in the United States, which includes all U.S. national security agencies.

Dominion is not, and never has been, owned by Smartmatic. Neither has Smartmatic ever been a subsidiary of Dominion, as the complaint asserts. Dominion is an entirely separate company—they do not collaborate in any way and have no affiliate relationships or financial ties. Dominion does not use Smartmatic. These are all facts verifiable in the public record as well as in regulatory and legal filings.

Dominion does not have operations in Germany including an “Office of the General Counsel.”

Dominion Voting Systems are in fact auditable—and are audited and tested regularly by multiple government agencies and independent third parties. All electronic devices used in the U.S. must be designed to be audited.

Dominion’s system does in fact include a paper ballot backup to verify results. In fact, thousands of elections officials in Georgia just completed the largest vote recount in American history using the paper ballots produced by Dominion devices.

Dominion’s system cannot be manipulated by a technician in the way Powell alleges. This has been confirmed by the government agencies that have certified Dominion equipment.

Despite repeated counts and audits, there is no evidence of any kind that any voting system deleted, lost, or changed votes in Georgia, or in any of the other 28 states that use Dominion devices. Certifications and audits have instead shown the accuracy, transparency, and reliability of Dominion’s systems.

The federal government agency that oversees U.S. election security verified that there is no evidence that this election was in any way compromised. In fact, they have called it the most secure election in American history.

There were no “glitches” with Dominion’s voting systems, and no unauthorized or last-minute software updates occurred.

There were no “data breaches” of Dominion software by anyone, let alone rogue foreign actors.

Human errors did occur in some counties but were resolved quickly by county officials before the canvass process.

Votes are not processed outside the United States. Votes are counted and reported by county and state election officials—not by Dominion, or any other election technology company.

Election safeguards—from testing and certification of voting systems to canvassing and auditing—prevent malicious actors from tampering with results.

Days later, Georgia officials angrily and publicly responded after a 20-year-old Dominion employee was threatened with a noose.

“A 20-something tech in Gwinnett County today has death threats and a noose put out saying he should be hung for treason because he was transferring a report on batches from an EMS to a county computer so he could read it,” said Gabriel Sterling, a Republican voting system implementation manager in Georgia. “His family is getting harassed now. There’s a noose out there with his name on it. And it’s not right.”

“I’ve got police protection outside my house. Fine. You know, I took a higher-profile job. I get it, the secretary ran for office; his wife knew that, too. This kid took a job. He just took a job, and it’s just wrong,” Sterling continued.

Powell’s legal efforts, colloquially known as the “Kraken” lawsuits, have gone on to lose in every court in which they have appeared. In Georgia, Powell and her co-counsel sought to have a judge issue a temporary restraining order to keep Dominion voting machines untouched. When they didn’t quite get the order they were looking for in the district court, Powell et al. took an interlocutory appeal to Eleventh Circuit.

This was an attempt, they said, to perform a forensic analysis in the name of ” every freedom-loving world citizen” on machines in 10 counties: “Appellants, the people of Georgia and, indeed, the people of the United States, and every freedom-loving world citizen will be irreparably harmed if Appellees are allowed to alter the voting machines to rig elections in this country and make forensic analysis of the voting process impossible.”

But a Trump-appointed judge penned the opinion of the three-judge panel denying that request for lack of jurisdiction. This kicked the case back down to the district court, where the case was dismissed three days later.

“The relief that the plaintiffs seek, this court cannot grant,” U.S. District Judge Timothy C. Batten ruled, calling this suit “the most extraordinary relief ever sought” for an election in a court. Similar “Kraken” lawsuits were rejected in Michigan, Wisconsin, and Arizona.

Those “Kraken” have since migrated to the Supreme Court docket, but the odds of the high court hearing these cases seem slim to none.

In any event, Dominion has sent Powell a letter on Wednesday that the New York Times called a “a preparatory step to formal legal action.”

According to the Times, Dominion is demanding that Powell publicly retract false claims alleging a connection to Hugo Chavez, ties to Venezuela, and a “no-bid contracts” scheme.

The letter began with a screenshot of Giuliani’s meltdown during the “elite strike force” press conference that led the Trump campaign to distance itself from Powell. 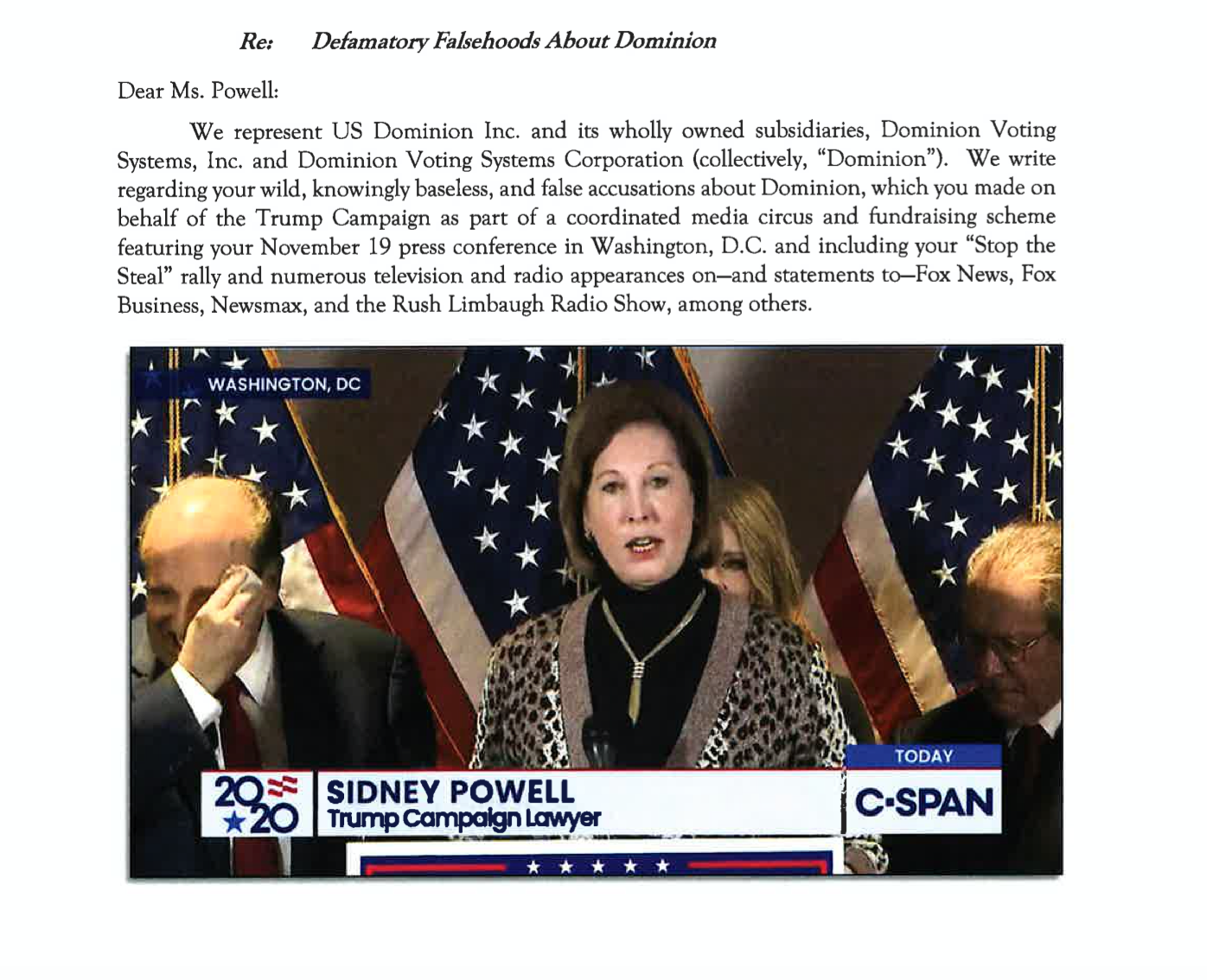 “Your outlandish accusations are demonstrably false. While soliciting people to send you ‘millions of dollars’ and holding yourself out as a beacon of truth, you have purposefully avoided naming Dominion as a defendant in your sham litigations—effectively denying Dominion the opportunity to disprove your false accusations in court,” the letter from Dominion’s attorneys Thomas Clare and Megan Meier said.

Both of them are defamation lawyers, and Meier’s bio quotes an unnamed in-house counsel for an unspecified Fortune 500 company as saying this about her: “If you find yourself in the unenviable position of being targeted with defamatory attacks, you want Megan in your corner fighting back.”

That person said Meier’s “expertise in defamation law is unsurpassed.”

“Dominion values freedom of speech and respects the right of all Americans—of all political persuasions—to exercise their First Amendment rights at to disagree with each other. But while you are entitled to your own opinions, Ms. Powell, you are not entitled to your own facts,” the letter went on. “Defamatory falsehoods are actionable in court and the U.S. Supreme Court has made clear that ‘there is no constitutional value in false statements of fact.’ Dominion welcomes transparency and a full investigation of the relevant facts in a court of law, where it is confident the truth will prevail.”

Dominion’s lawyers claimed Powell’s various statements are “defamatory per se and have exposed [her], the entities [she] control[s], and the Trump campaign to substantial legal risk for defamation.”

The company said it has “suffered enormous harm” and that its employees have been “stalked,” “harassed,” and “received death threats.”

In an appeal to “truth and confidence in American Democracy,” Dominion demanded a public retraction from Powell to “set the record straight.” If she does not, the letter said, this will be “viewed as additional evidence of actual malice.”

On top of the retraction demand, the letter said Powell should preserve all relevant documents, including communications with anyone associated with the Trump campaign. Trump campaign lawyers Rudy Giuliani and Jenna Ellis were mentioned by name. So was Powell’s “Kraken” co-counsel Lin Wood. Dominion lawyers said the records preservation demand applies to “all financial and corporate records” for Powell’s “legal defense fund” Defending the Republic, as well as Powell’s communications with witnesses/experts she has cited and media figures. 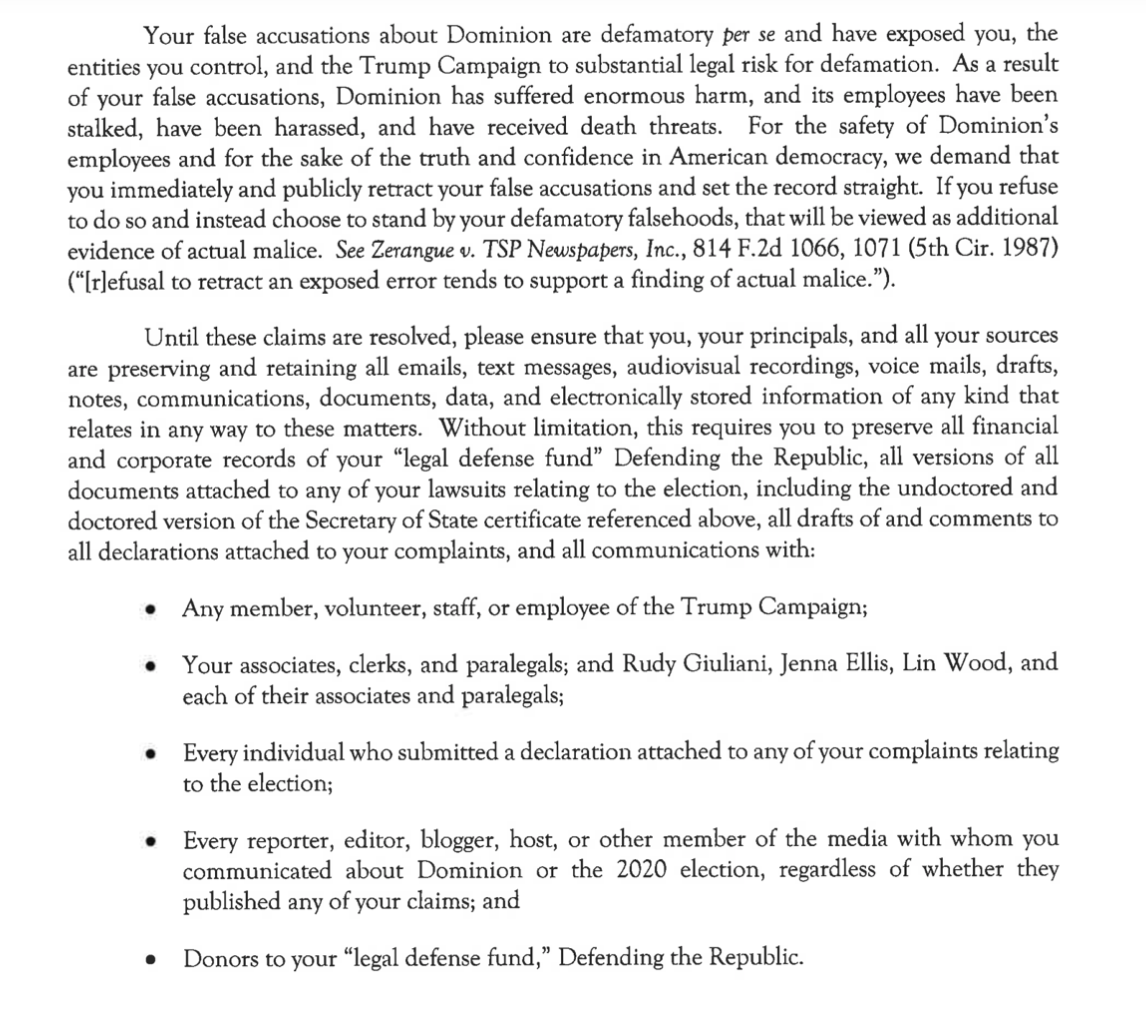 In late November, Powell told Newsmax that she thought there are “multiple people in the [Republican Georgia] Secretary of State’s office and other that should be investigated in Georgia for what benefits they might have received for giving Dominion the $100-million, no-bid contract.”

Newsmax fact-checked that in the story in which that Powell quote appeared, pointing to a 2019 article in the Atlanta Journal-Constitution. That report said that Dominion was not the only bidder but was the “lowest-cost system” among the the three companies that vied for the contract:

Dominion, a Denver-based company, won the contract in large part because it offered Georgia the lowest-cost system among three companies that submitted bids, according to evaluation score sheets. Though ES&S scored higher on the government’s criteria for a replacement voting system, Dominion came out on top when the price of its system was taken into account.

Law&Crime reached out to Powell for comment on the retraction demand, but we have not yet heard back.

Smartmatic has also said that Powell’s allegations are completely false and extremely harmful. The retraction letter-cum-legal threat cited numerous statements Powell made on Fox News and Fox Business in November.

According to Reuters, Smartmatic only helped tally votes in “left-leaning Los Angeles County, where Biden’s victory was never in doubt.” Nonetheless, the company finds itself in an “existential” crisis, Smartmatic CEO Antonio Mugica told Reuters one week ago.

The company said that Fox News, Newsmax, and OAN could have “easily discovered the falsity of the statements and implications made about Smartmatic by investigating their statements before publishing them to millions of viewers and readers,” but they did not.

Mugica said the president’s allies simply have “no evidence to support their attacks on Smartmatic because there is no evidence.”

“This campaign was designed to defame Smartmatic and undermine legitimately conducted elections,” he said. “Our efforts are more than just about Smartmatic or any other company. This campaign is an attack on election systems and election workers in an effort to depress confidence in future elections and potentially counter the will of the voters, not just here, but in democracies around the world.”

Smartmatic said that it reserved the right to sue for defamation and disparagement. Dominion also called Powell’s numerous statements “defamatory.” Dominion’s lawyers said that the letter was “not a complete recitation of our client’s rights and remedies, all of which are expressly reserved.”

It’s unclear at this time if there will actually be lawsuits from either Smartmatic or Dominion or both.

Read the Dominion letter below: