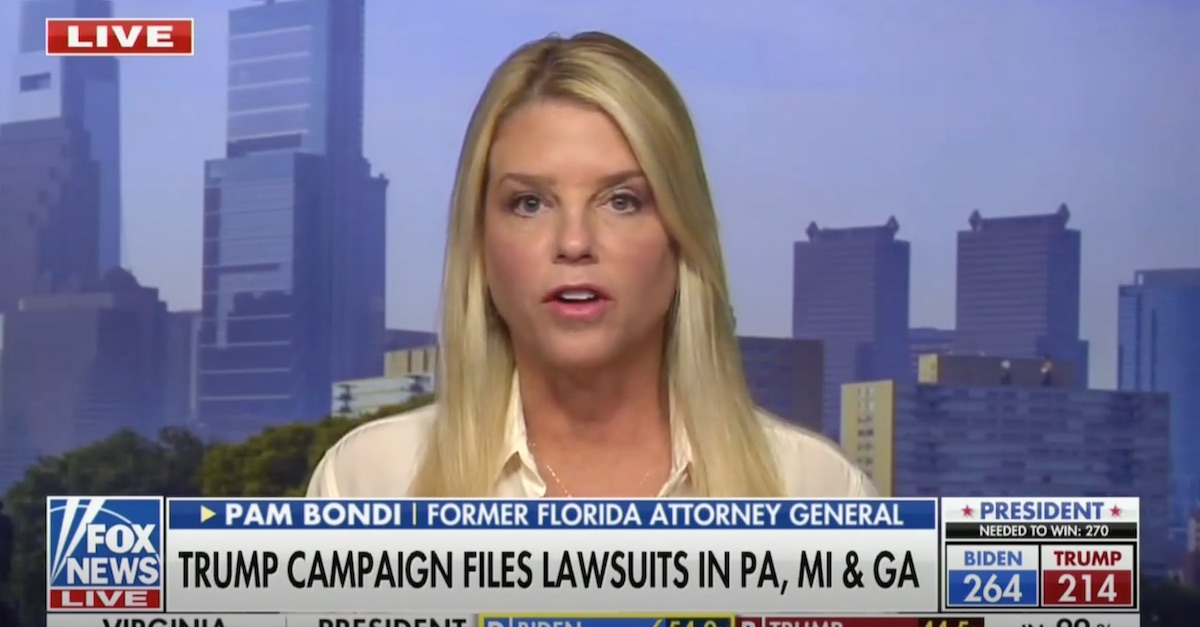 As of Thursday morning, the margins in Election 2020 are tight in Georgia, Nevada, and Pennsylvania. Republican lawyers and longtime politicians have responded by baselessly alleging fraud as more mail-in ballots are counted and tend to favor Joe Biden over President Donald Trump.

Pam Bondi, the former Florida Attorney General who was once suspected of engaging in a “quid pro quo” with Trump and who then went on to defend Trump during his impeachment, appeared on Fox & Friends on Thursday in her capacity as a Trump campaign advisor. Bondi, also recently known for her Ballard Partners lobbyist work as a registered foreign agent for Qatar, alleged that there was “evidence of cheating” and “fake ballots.”

When pressed by Fox News hosts, however, Bondi failed to produce evidence to support her claims.

“There could be, that’s the problem,” Bondi answered. Notice the use of the word “could.” Bondi did not bolster her “fake ballots” claim for the rest of the interview, but instead pivoted to other subjects like election observation and ballots mailed to dead people.

Here’s what Trump lawyer actually said. Even she doesn’t claim any ballot fraud or irregularities. https://t.co/w3SJR3klnj

Twitter slapped Newt Gingrich with a label on Thursday morning after the Republican former Speaker of the House baselessly alleged fraud in key states. Gingrich asserted that it is “increasingly clear that Wisconsin, Michigan and Pennsylvania are all being stolen by Democrats and the research is almost certainly going to yield far more votes stolen than Biden’s current margins.” He provided no evidence to support this, so his tweet was promptly treated as disinformation.

Twitter should flag this dangerous lie from the former Republican speaker. There is no evidence that any state is doing anything illicit; they are trying to count every vote. (I wish Gingrich had a capacity for shame that we could call upon, but experience suggests otherwise.) https://t.co/yKJIr9ZCtX

It’s come to this: President Trump is saying STOP THE COUNT, in which case (as of right now), he would lose; Trump campaign lawyers (Jenna Ellis) are saying that the media is lying when it says the campaign wants to stop counting votes; and Trump advisors (Kellyanne Conway) are also saying all legal votes need to be counted.

Kellyanne Conway says to count all the votes.

Trump says to stop counting them.

It’s almost as if they don’t have a coherent strategy at all. https://t.co/hUapPdOzrh

Page Pate, a trial lawyer and legal analyst for WABE News, said he was “stunned” by how “weak, ineffective, and uncoordinated” Trump campaign legal efforts have been.

I’m honestly stunned by the weak, ineffective, and uncoordinated legal effort being mounted by the Trump Campaign. With all that money, and all those lawyers, is this really the best they can do?

The Trump campaign has, indeed, filed a slew of lawsuits in a number of states post-Election Day. But even the president doesn’t seem to think “meaningful access” to observe what’s going on is meaningful. Here was his What’s the Point of What Our Lawyers Are Doing tweet from Wednesday night:

Our lawyers have asked for “meaningful access”, but what good does that do? The damage has already been done to the integrity of our system, and to the Presidential Election itself. This is what should be discussed!