WH Counsel Stuck by Trump Through Impeachment, But His Refusal to Back Election Conspiracy Has Reportedly Landed Him on the Chopping Block 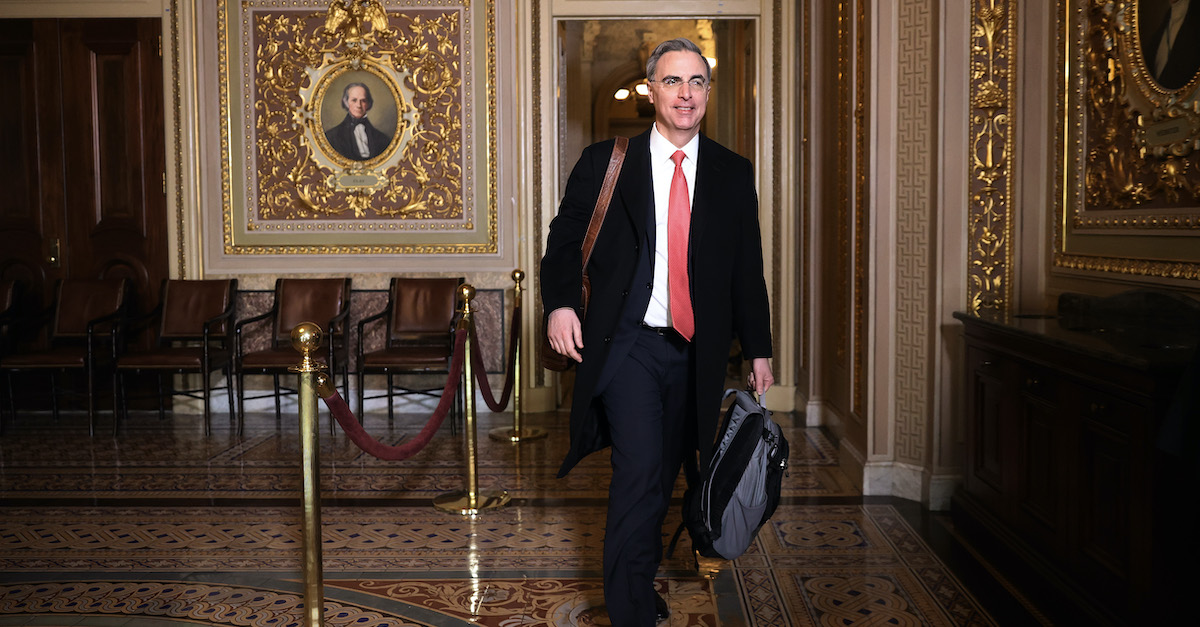 In the wake of losing the 2020 election, reports from inside the White House have depicted an increasingly unhinged President Donald Trump refusing to accept reality and turning on any advisors and aides that aren’t willing to countenance his most outlandish ideas to remain in office. As a result, several of the president’s most loyal allies are being thrown under the bus by the pack of fringe conspiracy theorists. White House counsel Pat Cipollone is now among those in danger of being ousted, Axios reported on Tuesday.

According to the report, Trump is particularly “fed up” with Cipollone because the attorney, who previously endorsed unconventional positions in support of his boss, has spoken out against some of the more extreme efforts to overturn the results of the election. Critics said Cipollone even lied in defense of Trump when defending him during January’s impeachment proceedings.

“At this point, if you’re not in the ‘use the Department of Homeland Security or the military to impound voting machines’ camp, the president considers you weak and beneath contempt,” the Axios report stated, adding that Cipollone’s supporters believe he’s on the verge of being replaced with a “fringe loyalist.”

Two of the new White House figures that have the president’s ear are “Kraken” attorney Sidney Powell—who was briefly a member of the Trump campaign’s legal team—and former Overstock CEO Patrick Byrne, both of whom have repeatedly pushed unsubstantiated theories about the election being stolen from Trump.

Joined by the recently pardoned Lt. Gen. Michael Flynn—who signed on to a petition for the president to declare martial law and have the military run another election—Powell and Byrne met with Trump, Cipollone, and Chief of Staff Mark Meadows in the Oval Office on Friday for what was reportedly a very contentious strategy session.

“Powell and others told the president Friday that they had evidence that voting machines had been tampered with, though White House officials said the evidence was nonsense. But Powell’s presence in the West Wing — and her multiple returns for additional meetings, including on Monday — are an indication that the outsiders are gaining sway,” the Washington Post reported late Monday.

Following an off-the-wall press conference last month that included several references to the late Hugo Chavez, the Trump campaign distanced itself from Powell. But with advisors like Cipollone rejecting extreme measures such as declaring martial law or impounding state voting machines, Trump has brought Powell and her theories back into the fold.

The pugnacious Byrne burst onto the post-election scene, wasting no time attacking the president’s inner-circle publicly and in meetings. On Saturday, he accused Cipollone of being a “leaker,” something Trump views as a severe form of betrayal.

“I was there for the full 4.5 hour meeting. Claims military coup/martial law were discussed is 100% fabrication. Trump is lied to by his own advisers, who tell staff ‘get the president to concede’ while they stall Trump. Meadows + Lawyers Eric, Derek, GC Pat Cipollone (leaker),” Byrne tweeted.

I was there for the full 4.5 hour meeting. Claims military coup/martial law were discussed is 100% fabrication. Trump is lied to by his own advisers, who tell staff “get the president to concede“ while they stall Trump. Meadows + Lawyers Eric, Derek, GC Pat Cippollone (leaker). https://t.co/7nrUqpsxEa

Asked if the election was still winnable for Trump, Byrne responded by saying the only thing preventing the president from staying in office were his advisors.

“It is 100% winnable. No martial law required. Sydney and Flynn presented a course that I estimate has 50% – 75% chance of victory,” Byrne tweeted. “His staff just try to convince him to do nothing but accept it. As a CEO, my heart broke to see what he is going through. He is betrayed from within.”

It is 100% winnable. No martial law required. Sydney and Flynn presented a course that I estimate has 50% – 75% chance of victory. His staff just try to convince him to do nothing but accept it. As a CEO, my heart broke to see what he is going through. He is betrayed from within.

With Attorney General Bill Barr departing his position this week and acting AG Jeffrey Rosen taking over the role, it’s very unclear how restrained the president will be during his last month in office. As for Barr, he said on Monday that he saw no reason to appoint a special counsel to investigate election fraud.

Barr said he was sure there is some fraud in every election, including this one, but he noted that he has seen no evidence to support allegations that “systemic or broad-based” election fraud cost Trump a win.

The attorney general also said he saw “no basis” for “wholesale seizure of [voting] machines by federal government.”