‘This Is Not True’: Pat Cipollone Criticized for False Claim About 2020 Election During Trump Defense 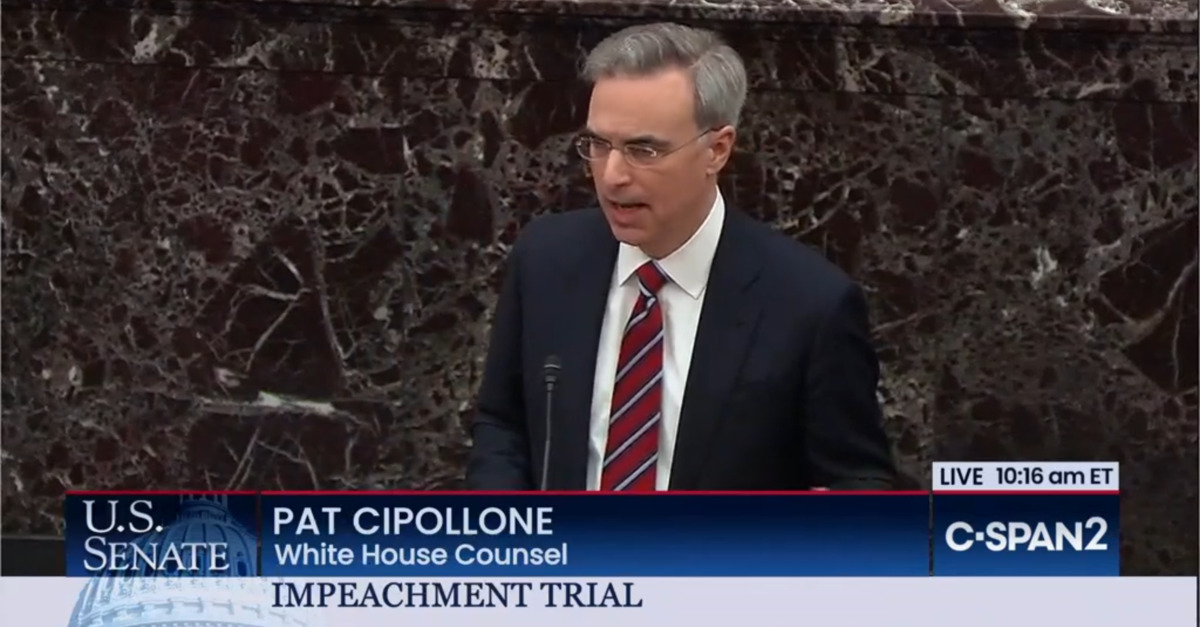 President Donald Trump‘s lead defense attorney in his impeachment trial before the U.S. Senate got things started off in a decidedly Trump-esque and counter-factual manner.

White House Counsel Pat Cipollone began his argument by making the factually inaccurate claim that removing Trump from office would also remove him from the ballot in the 2020 election.

“And I don’t think they spent one minute of the 24 hours talking to you about the consequences of that for our country. Not one minute. They didn’t tell you what that would mean for our country,” Cipollone continued. “Today, this year and forever into our future.”

An impeachment proceeding, however, is a removal proceeding. If removed, a separate vote would be required for disqualification–a difference repeatedly elided by the presidential defense team.

The defense’s politically-hued position drew an immediate reaction–negative and positive.

“Cipollone suggests Dems real motivation is to have Trump disqualified from the 2020 ballot,” noted former Republican congressman David Jolly. “As a reminder, the GOP under Trump has currently cancelled presidential primary elections in multiple states so as to remove the President’s opponents from the ballot.”

Trump’s defense begins with Pat Cippolone arguing that impeachment is an effort to undo an election. Yes, but Constitution provides for removal of a president through impeachment. Under his theory, no impeachment could ever occur.

Trump’s lawyer Pat Cipollone makes up the claim that Democrats “are here to steal two elections.” He adds: “They want to remove the President Trump from the ballot.” Cipollone says Democrats want to take away “the right to choose our president.”

This is not true. pic.twitter.com/27a5WVvkD2

But, as noted, some were quite happy to see Cipollone lie:

“[Democrats are] asking you not only to overturn the results of the last election but… they’re asking you to remove President Trump from the ballot in an election that’s occurring in approximately 9 months.” -Pat Cipollonepic.twitter.com/fyNW20Kc2r

If no disqualification vote is held, even a convicted official can reenter federal service. U.S. District Judge Alcee L. Hastings was removed from office in 1989 after he was impeached in the House for engaging in a “corrupt conspiracy” — soliciting a $150,000 bribe in a case before him — and convicted in the Senate. But the Senate took no vote on disqualification. In 1992, Hastings ran for and won a seat from Florida in the U.S. House of Representatives, where he remains to this day.

“If Trump were convicted by the Senate, but the Senate chose not to hold a disqualification vote, he could in theory run again, win and return to the White House,” Bowman continued. “The path to reelection would also be open if a Senate vote favoring disqualification failed.”

The president’s defense repeated the false assertion over and over.

“They come here to the Senate and they ask you, remove a president president, tear up the ballots and all of your states,” Cipollone said near the end of his opening statement.