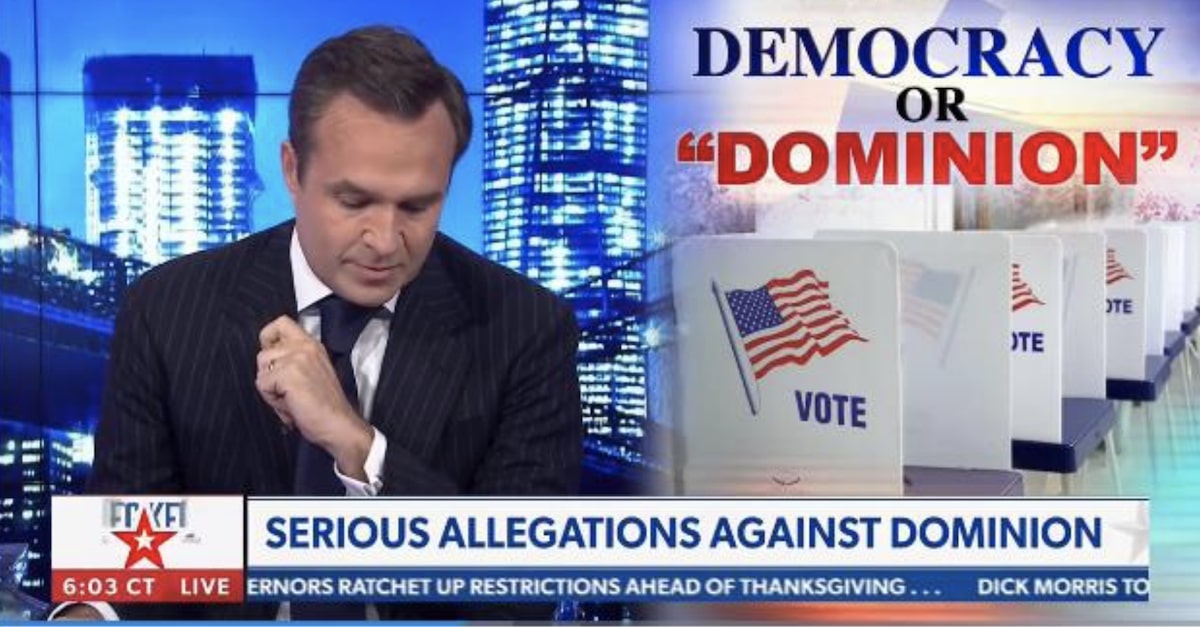 This image from a Newsmax broadcast is embedded in Dominion’s lawsuit.

“Contrary to Newsmax’s contentions, Dominion’s allegations are not conclusory,” Judge Eric Davis wrote toward the end of a 64-page ruling. “The complaint supports the reasonable inference that Newsmax either knew its statements about Dominion’s role in the election fraud were false or had a high degree of awareness that they were false. For example, Newsmax possessed countervailing evidence of election fraud from the Department of Justice, election experts, and Dominion at the time it had been making its statements. The fact that, despite this evidence, Newsmax continued to publish its allegations against Dominion, suggests Newsmax knew the allegations were probably false.”

The judge’s opinion falls nearly a year after Dominion first filed a pair of lawsuits against Newsmax and One America News (OAN) in Delaware Superior Court.

“We are pleased to see this process moving forward to hold Newsmax accountable,” a Dominion spokesperson said in a statement.

Newsmax emphasized that the litigation remains in its early stages.

“We are not surprised by the judge’s decision as this was a preliminary motion and he made a very similar ruling in the Fox News case,” the network’s spokesperson said. “Newsmax reported on both sides in the election dispute without making any claim about the results other than saying they were ‘legal and final.’ We are confident that Newsmax will ultimately prevail given the strong First Amendment protections provided to ensure free speech and a free press.”

Dominion said that Newsmax and OAN engaged in a “race to the bottom” in an effort to court Fox News viewers dissatisfied with the network calling Arizona for Joe Biden, who handily defeated Donald Trump. The failure of more than 60 lawsuits, the completion of numerous recounts and audits, and scores of members of the 45th president’s administration confirmed that fact. Trump continues to falsely claim that he won.

Newsmax now claims to have presented both accounts of the 2020 election, the evidence established by the courts and vote tallies and the baseless theories peddled by pro-Trump partisans.

As the lawsuit notes, Newsmax aired the false claim that the company was created in Venezuela by late autocrat Hugo Chavez for the purpose of rigging elections. (Dominion was created in Toronto, Canada.) Dominion says that Newsmax aired that demonstrably false claim in service of a wider theory that it manufactured Biden’s victory. In fact, swing-state counties that used Dominion machines mostly voted for Trump, the Washington Post noted.

Under longstanding Supreme Court precedent established by New York Times v. Sullivan in 1963, Dominion must prove actual malice in order to prevail at trial. That can be established if Dominion shows Newsmax knew the bogus election fraud claims were false, or recklessly disregarded the truth of the question.

Judge Davis found Dominion met that high bar for the purposes of Newsmax’s motion to dismiss. In fact, one of their on-air personalities boasted of their scrutiny of the issue, the judge noted.

“Furthermore, a Newsmax personality stated to have an ‘independent investigation unit’ that had been exploring evidence surrounding Dominion’s role in an allegedly rigged election,” the ruling states.