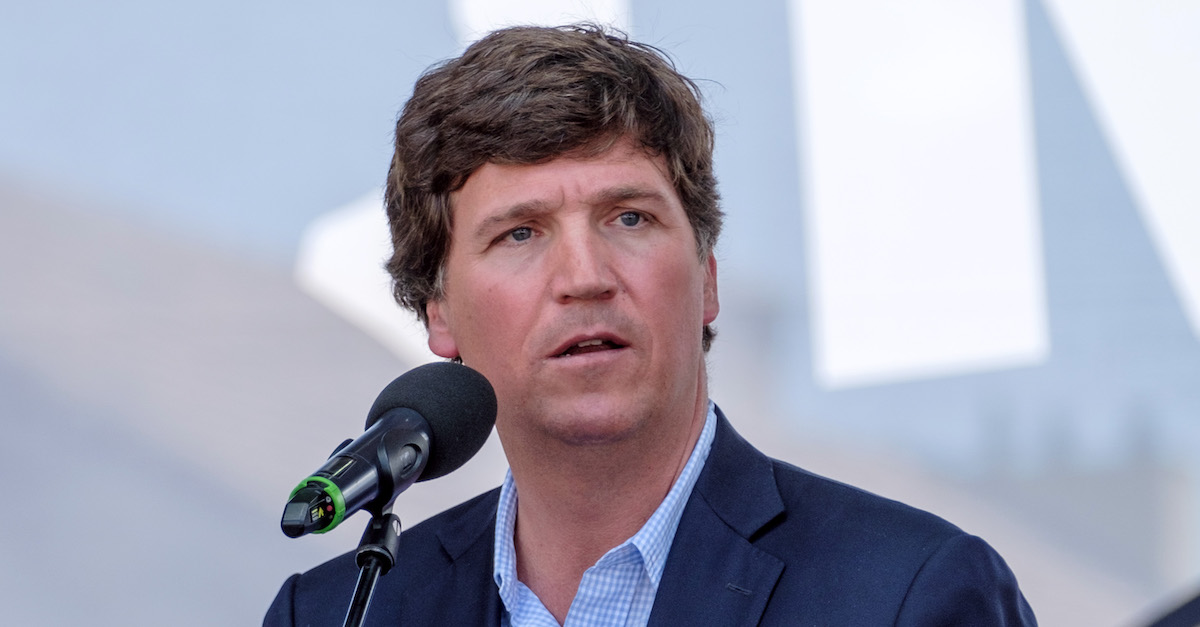 A New York State judge on Tuesday issued a mixed decision on motions to dismiss a multi-billion-dollar lawsuit against Fox News, several of its hosts, and two other individual defendants by the voting technology company Smartmatic. Host Tucker Carlson was not named as a party to the lawsuit, but the judge nonetheless used his words as evidence that the case against several of the named defendants should continue forward.

The original Feb. 4, 2021 lawsuit — filed by way of a whopping 285-page primary complaint document — alleged sixteen separate causes of action.  The allegations include a mix of defamation and disparagement claims. The named defendants are the Fox Corporation, Fox News Networks, LLC, then-host Lou Dobbs, and current hosts Maria Bartiromo, and Jeanine Pirro (hereafter we will refer to the corporate defendants as “Fox”). Also named as defendants are Trump-associated attorneys Rudy Giuliani and Sidney Powell. The named plaintiffs were Smartmatic USA and two of its corporate parent entities.

The judge ordered that the cases against Fox’s corporate entities, against Bartiromo, and against Dobbs should proceed. However, the judge threw out the cases against Pirro and Powell. The judge dismissed some of the claims against Giuliani but kept others intact.

“These statements and implications were defamatory because they exposed Smartmatic to public hate, contempt, ridicule, and disgrace, and because they induced an evil and unsavory opinion of Smartmatic and its business into the minds of a substantial number of the community,” the voting technology company alleged.

Fox and its hosts moved to dismiss the case by saying its speech about the election was constitutionally protected.

“This suit strikes at the heart of the First Amendment,” wrote Fox attorney (and former U.S. Solicitor General) Paul Clement in a Feb. 8, 2021 motion to dismiss. “Smartmatic’s theory is fundamentally incompatible with the reality of the modern news network and deeply rooted principles of free speech law.”

New York Supreme Court Justice David B. Cohen mostly rubbished those claims in Tuesday’s 61-page order. (In New York, the “supreme court” is “a single great tribunal of general state-wide jurisdiction, rather than an aggregation of separate courts sitting in the several counties or judicial districts of the state,” but it is a bit more like a superior court system in other states; the highest appellate court in New York State is not the Supreme Court but rather the Court of Appeals.)

In a brief recap of the matter, Judge Cohen noted that Smartmatic “claimed that Fox News had to take steps to preserve its viewership” and “boost ratings by capitalizing on the popularity of former President Donald Trump” because Fox “infuriated President Trump and many of his supporters by declaring on election night that President Biden had won the vote in Arizona.”

Thus, Cohen said in his recap of the litigation, Smartmatic alleged that “defendants Fox Corporation and Fox News Network LLC . . . fabricated a story that the election was stolen.”

The judge referred to Smartmatic USA by the acronym SUSA for short.

Judge Cohen then called Smartmatic’s complaint “meticulous[]” and said many of Giuliani’s claims were offered —and broadcast — “without any evidence.” He said Dobbs uttered several responses “without any basis.”

At least half of Cohen’s Tuesday order was spent recapping the various claims and defensive postures of the litigants. When boiled down to low gravy, however, Cohen noted that the law required Smartmatic to prove “actual malice” against the defendants — that is, “that one or more of the defendants acted out of personal spite or ill will, with reckless disregard for a statement’s truth or falsity, or with a high degree of belief that the statements were probably false” (quote cleaned up).  And, here, Cohen rationed that Smartmatic properly alleged such facts against most, but not all, of the defendants — and that Smartmatic’s claim should survive New York’s Anti-SLAPP law (that’s a law which protects against lawsuits which could scuttle speech about matters of “public petition and participation”).

From the judge, at length:

This Court finds that plaintiffs have adequately pleaded that their claims against Fox News have a sufficient basis in law so as to withstand the burden imposed by CPLR 3211(g). They allege that Fox News acted with actual malice by broadcasting information proffered by Powell, Giuliani, and the Fox anchor defendants which it knew was false and that, even if Fox News did not know the information was false, it had reason to doubt the veracity of the same since it was unsupported by any facts and was refuted by election specialists and officials. Plaintiffs also plead that Fox News acted with ill will towards them by making them scapegoats for President Trump’s loss of the election and by broadcasting material intended to bolster its ratings at the expense of their reputation.

The judge went on:

Fox News attempts to distance itself from the allegedly defamatory statements made by Powell and Giuliani by claiming that it repeatedly asked those defendants for proof substantiating their accusations about plaintiffs and they failed to produce any. However, this fact can also support plaintiffs’ claim that Fox News had reason to suspect that what it was broadcasting was false, and nevertheless continued to allow Powell and Giuliani to appear on its network, specifically on shows hosted by Dobbs, Bartiromo, and Pirro, to promote completely unfounded claims that plaintiffs’ software enabled President Biden to steal the election. Even assuming that Fox News did not intentionally allow this false narrative to be broadcasted, there is a substantial basis for plaintiffs’ claim that, at a minimum, Fox News turned a blind eye to a litany of outrageous claims about plaintiffs, unprecedented in the history of American elections, so inherently improbable that it evinced a reckless disregard for the truth.

The judge then pointed to the words of Tucker Carlson as evidence that Fox could have taken a different course. That course, the judge reasoned, had indeed been charted by Carlson himself.  Per the judge (added emphasis ours):

Ironically, the statements of Tucker Carlson, perhaps the most popular Fox News host, militate most strongly in favor of a possible finding that there is a substantial basis that Fox News acted with actual malice. As noted above, on November 19, 2020, Dobbs posted a video of he and Powell on Twitter with a caption stating, inter alia, that Powell “has no doubt that Dominion voting machines run [SUSA]’s software which allows [it] to manipulate the votes.” The same day, Carlson wrote an article stating that, for over a week, Powell had been claiming that the election had been stolen and that, if Powell were correct, it would be the greatest crime in American history, and he thus asked her to substantiate her comments. However, Powell never provided the evidence requested by Carlson, and President Trump’s campaign advised Carlson that it knew of no such evidence. Therefore, there are sufficient allegations that Fox News knew, or should have known, that Powell’s claim was false, and purposefully ignored the efforts of its most prominent anchor to obtain substantiation of claims of wrongdoing by SUSA.

Judge Cohen then went, one by one, through the claims against the various defendants in isolation. He decided to keep the lawsuits against Fox as a corporate entity, against Maria Bartiromo, and against Lou Dobbs alive. But he decided to scuttle the litigation against Jeanine Pirro via this brief missive:

According to the transcript of her November 21, 2020 show on Fox News, Pirro said that President Trump’s lawyers were “alleging [that] a company called Dominion, which they say started in Venezuela with Cuban money and with the assistance of [SUSA] software, [has] a backdoor [which] is capable of flipping votes.” Construing the statement in the context of the entire transcript, it is not reasonably susceptible of a meaning defamatory to plaintiffs “and cannot be made so by a strained or artificial construction.” This statement, which contains the sole mention of SUSA in the transcript, appears on its face to mean that Dominion was founded in Venezuela with Cuban money, that SUSA software assisted in establishing Dominion, and that Dominion had a backdoor capable of flipping votes. Although Pirro states elsewhere that the Democrats “stole votes,” she does not specify that the votes were stolen by using SUSA software. Therefore, the complaint is dismissed as against Pirro.

Elsewhere, Cohen tossed the case against Sidney Powell “due to lack of personal jurisdiction” because she has only minimal contacts to New York State.

Cohen also dismissed the claims by Smartmatic’s holding companies against Rudy Giuliani because it was unclear whether Giuliani referred to them directly. The judge also tossed some of the product disparagement claims against Guiliani. A collection of other claims against Giuliani remains intact.

The upshot is the order is that the cases against Fox, Bartiromo, Dobbs, and the remaining claims against Guiliani will proceed through the court system.

In a statement to Mediaite, Fox responded this way:

While we are gratified that Judge Cohen dismissed Smartmatic’s claims against Jeanine Pirro at this early stage, we still plan to appeal the ruling immediately. We will also continue to litigate these baseless claims by filing a counterclaim for fees and costs under New York’s anti-SLAPP statute to prevent the full-blown assault on the First Amendment which stands in stark contrast to the highest tradition of American journalism.

Read the full order by Judge Cohen below:

[Editor’s note: some legal citations have been omitted from quotes. The full citations are in the embedded documents.]