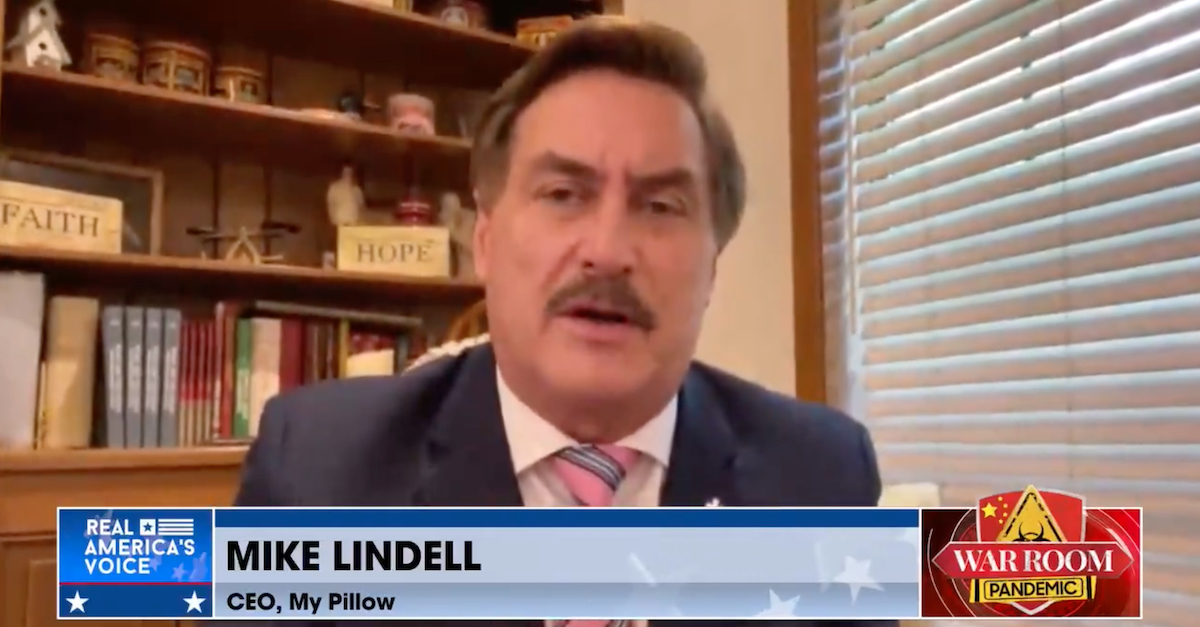 Mike Lindell complains about the election on Steve Bannon’s podcast.

MyPillow CEO and election conspiracy theorist Mike Lindell on Thursday filed an 82-page civil lawsuit in federal court against voting technology companies Dominion and Smartmatic. Seventeen exhibits, all adding up to hundreds of pages, are attached — many of which are demand letters by Dominion accusing Lindell of “lying” about the outcome of the 2020 election and warning him he faced legal jeopardy if he continued to press claims “that the election had been stolen.” The letters, which preceded Dominion’s separate lawsuit against Lindell, said Lindell’s complaints about the election were really nothing more than a “defamatory marketing campaign” which “boosted” Lindell’s “sales considerably,” therefore “financially enrich[ing]” Lindell “by selling more MyPillow products to Trump supporters.”

Lindell’s separate complaint, filed in U.S. District Court for the District of Minnesota, is in essence a legal counter-offensive. It is replete with multiple quotes from George Orwell’s 1984 and Ray Bradbury’s Fahrenheit 451. Lindell’s case also contains allegations that the various elections technology company defendants were — and are — attempting to illegally shut Lindell up by threatening and then filing their own defamation lawsuits against him several weeks back. Lindell’s suit cites Wikipedia to allege a mathematical-style equation he claims describes the companies’ litigation against him: “Lawsuit Warfare = Lawsuit + Warefare = Lawfare.” Various sections of the lawsuit are entitled “The Rise of the Machines,” “Strange Bedfellows,” “Ghosts in the Machines,” “Gaslighting: The REAL Big Lie,” and “Shut Up or Else.”

The filing has been described as a “nonsense,” “half-assed,” “craptastic legal job” filled with “baloney” and “lunacy” that is even “cringier and more incoherent than” than even Lindell’s critics expected. One attorney called it a “flaming bag stuffed with feces” because it attempts to litigate similar issues in a separate U.S. District Court from where Dominion sued Lindell originally — among other alleged transgressions.

Lindell seems undeterred by his critics.

Another paragraph in essence summarizes much of the case:

Lindell will prove that the Dominion Defendants, acting in concert and as part of an unlawful enterprise alongside the Smartmatic Defendants, have weaponized the court system and the litigation process in an attempt to silence Lindell’s and others’ political speech about election fraud and the role of electronic voting machines in it. In the specific context of political speech about something as vital to a republican form of government as election integrity, no litigant should be permitted to use the courts and the litigation process as a bludgeon to suppress and stifle dissent. But that is what the Dominion Defendants and Smartmatic Defendants have done. Many of their victims lack the resources to fight back and expose the defendants’ scheme for what it is—an authoritarian abuse of state power fueled by the virtually unlimited resources from their ideological comrades. But Mike Lindell has the resources and the will to fight back, albeit at great personal and financial cost; Mike Lindell believes the future of the American republic depends on fighting back against censorship of information concerning the fundamental aspect of our republic—fair and secure elections. So Mike Lindell brings this suit to bring a stop to the defendants’ abuses of the legal system and protect Americans’ right to speak freely on matters of the utmost public concern.

Included in the case are several paragraphs presented as “fact” which would be better dubbed as conclusions or allegations. For instance, part of the case reads as follows: “Fact: Voting machine companies like Dominion are state actors by virtue of their roles running elections in the United States—an essential state function.” That’s a legal conclusion, not a fact. And Lindell further alleges as “fact” that his alleged “state actors” cannot suppress, punish, or intimidate his “political dissent” about the 2020 election which ousted Donald Trump from the White House.

Attorney Alec J. Beck of Minneapolis signed the complaint (but is apparently already out of a job at the Barnes & Thornburg firm); attorneys Douglas A. Daniels and Heath A. Novosad of Houston have submitted applications pro hac vice to represent Lindell.

Lindell’s recent moves have been met with derisive scorn from many legal observers — including none other than Jenna Ellis, the attorney who sat and stood side by side with Rudy Guliani and, on one memorable occasion, Sidney Powell to raise questions about the 2020 election.

Respectfully, Mike Lindell should go back to law school… for the first time. 🤷🏼‍♀️ #WarRoom

Ellis might have been responding to Lindell’s comments prior to the lawsuit’s filing about what Lindell believes were Chinese attempts to meddle with the election through voting machines. He boasted that his allegations would reach the Supreme Court of the United States by July by advancing evidence which — in his view — is as strong as blood DNA at a crime scene.

Mike Lindell compares his cyber forensics proof of election fraud to “blood DNA at a crime scene.” He also states that the Supreme Court has to rule 9-0 in favor of his case because of this evidence. pic.twitter.com/KvloCxl0od

He’s boasted that this suit will prompt the Supreme Court to overturn the election, 9-0. It won’t, because 1) he sued private parties that don’t have the power to do that even if the court ordered it and; 2) he’s only seeking monetary damages. pic.twitter.com/aVTh9T1bJg

Other critics cut harshly into Lindell’s claims in the separate but related Dominion case. Here’s a sampling:

Most shocking part of Lindell’s lawsuit is not its demi-literacy or its coffee-table-book sensibility for pictures or its lunatic legal theories, but that lawyers from seeming mainstream firms put their name on it. For shame.

A great thread on the lunacy of Lindell’s countersuit against Dominion (including a citation of, uh, Hitler). But this point, about Douglas Frank, is one I’ve written about. (1/2) https://t.co/Q0BvJtt85F

Frank’s “proof” is discussed in the link below. My assessment of it includes this line:
“There are certain words I’m not allowed to use when writing for The Post, so I will describe that as ‘baloney.’ “

Out of sheer masochism just looked at the latest PillowGuy video “proving” election rigging, and it’s even cringier and more incoherent than I’d expected. Among other things, it seems almost certain Lindell himself is getting conned.

I don’t have much pity—never was there a more willing victim—but it’s comically apparent from the video that a bunch of dudes decided they could bill a rich moron for months of “cyber forensics” work & feed him nonsense, because he wouldn’t know enough to be able to tell.

Assuming Lindell isn’t in on it partly because if he were, he would have come up with something a LITTLE more superficially plausible looking. This is the kind of half-assed thing you throw together when you’re certain the mark doesn’t know anything.

OK, as promised, a thread on the flaming bag stuffed with feces Mike Lindell and his excellent lawyers at @BTLawNews left on the electronic doorstep of the Minnesota federal court yesterday

And yes, I tagged @BTLawNews (and am tagging their other practices @BTLawLE @BTLawTrade @BTLawDC) for a reason. I’m not sure they understand how rapidly this filing is torpedoing their reputation; I’ve already seen GC’s on here pledging never to send them any business

And that’s well deserved. Not only did @BTLawNews @BTLawLE @BTLawTrade @BTLawDC sign up for a morally repugnant assault on American democracy, *but they did a craptastic legal job doing it*. In-house counsel thus gets to stay away for both moral and practical reasons

It’s one thing to have zero moral compass beyond “hey, we’re going to get paid a pile of money for doing this,” @BTLawNews @BTLawLE @BTLawTrade @BTLawDC. It’s another thing entirely to torch your moral reputation while *also* informing the world you stink at “law” stuff, too

Let me be as clear as I possibly can: If I saw this quality of work from @BTLawNews @BTLawLE @BTLawTrade @BTLawDC on ANY case – even pro-bono representation of literal saints – I’d advise any client who asked to run away, not walk. This is capital-S shoddy on substance.

So as a matter of DC law, Lindell’s claim for abuse of process based on the defamation suit is dead as a fucking doornail unless he can prove Dominion never believed it had a viable case against him (and I doubt he alleges that, but we’ll see).

Guys, you CANNOT claim that Dominion is bound by *Minnesota* abuse of process law when it sued in Washington DC. Where jurisdictions’ laws conflict, courts weigh which jurisdiction has the most connection to the dispute, which has more of an interest in seeing its laws apply, etc

At best – at BEST – @BTLawNews @BTLawLE & @BTLawTrade are going to end up having this claim transferred to the DC court (@BTLawDC, you’re up!) to be heard as a counterclaim in the main action. More likely, the MN district court will abstain in this case and tell Lindell to go

file whatever counterclaims he wants in DC. There’s just no way that a Minnesota district court is going to allow parallel litigation, in two different federal courts, about the validity of Dominion’s allegations in its case against Lindell.

If you sincerely think that Dominion is intimidating witnesses, bring it to the attention of the judge in that case. That’s how you do that. Not with this buffoonery. pic.twitter.com/YWIRpzurGy

I just watched the Lindell “documentary” that promises to “prove” the election was stolen. There’s no actual proof presented, only an unidentified man making nonsensical claims about a supposed network capture log that bear no relationship to how election systems actually work.

Some noted that Giuliani himself is now selling MyPillows:

Rudy Giuliani is doing My Pillow ads during his hour-long YouTube video on UFOs. pic.twitter.com/7eIEYFpPYx

Read the lawsuit for yourself: