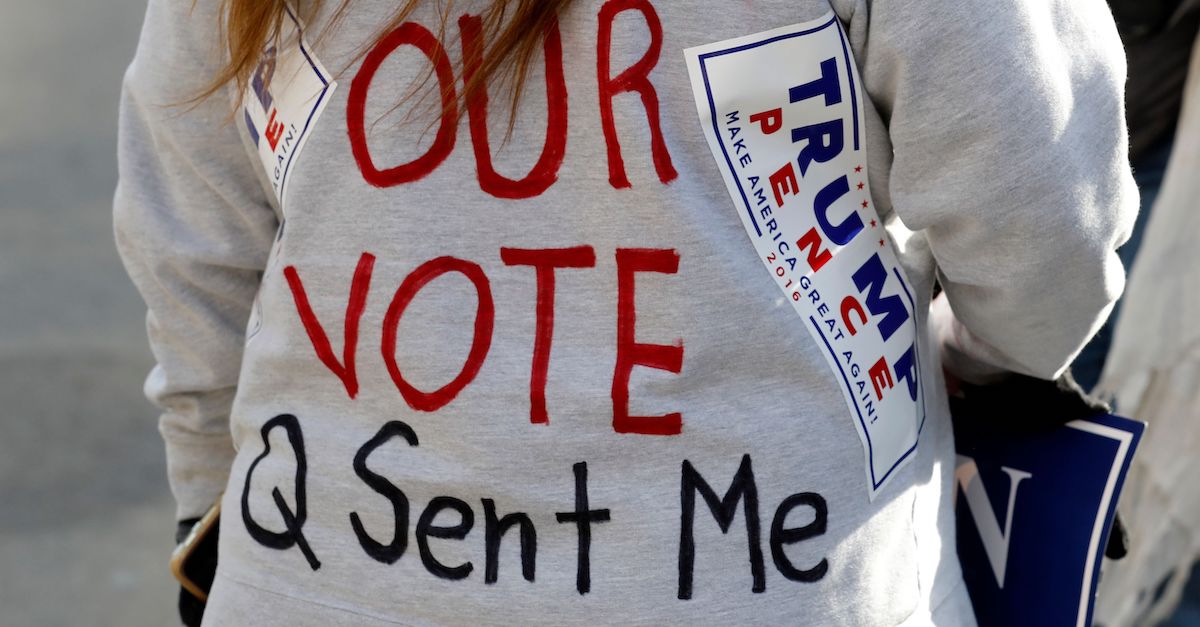 A Trump supporter with a sweatshirt bearing a slogan of the QAnon conspiracy theory demonstrates outside of the TCF Center to protest vote-counting in the 2020 election on Nov. 6, 2020 in Detroit, Michigan.

After failing to persuade two lower courts to block certification of Michigan’s election based in part on the debunked notion that rigged voting machines led to outgoing President Donald Trump’s decisive loss in the state, the outgoing commander-in-chief’s supporters elected to take their last-ditch effort to Michigan Supreme Court on Tuesday.

“Immediate consideration is necessary to prevent Defendants/Appellees from certifying the election results in Wayne County prior to a full results audit of the election being performed,” their attorney David Kallman wrote in a 4-page motion.

The Wayne County Board of Canvassers plans to meet at 3 p.m. EST on Tuesday to vote on certifying those results.

In a 20-minute phone interview, Kallman distanced himself from unfounded allegations that Dominion Voting Systems helped President-elect Joe Biden rack up more than 100,000 more votes than the incumbent.

“I’m not downplaying it,” Kallman said. “I’m not denigrating it. It’s not part of our suit.”

His clients, however, did cite the Dominion theory via an affidavit by Republican Melissa Carone, whose tales of electoral shenanigans failed to impress any of the judges who read it.

“Ms. Carone’s description of the events at the TCF Center does not square with any of the other affidavits,” Judge Timothy Kenny found. “There are no other reports of lost data, or tabulating machines that jammed repeatedly every hour during the count. Neither Republican nor Democratic challengers nor city officials substantiate her version of events. The allegations simply are not credible.”

Widely debunked by mainstream news outlets, the Dominion theory has found a home on One America News Network, among the outgoing president’s most loyal boosters on the airwaves. Carone also appeared on Fox Business, dedicated in large part to complaints about food for poll workers, inspired mockery from Never Trump Republican groups like the Lincoln Project.

Emphasizing that Carone’s affidavit was provided to his legal team, Kallman added that he did not run with the hypothesis in their complaint.

“If you look in our pleadings, we don’t talk about that,” he said, characterizing his case as a more modest effort to avail themselves of Michigan’s constitutional amendment allowing for an audit of votes.

On Monday, Michigan Court of Appeals Judge Michael Riordan declined to hear the case because of the Trump supporters’ “failure to persuade the Court of the existence of manifest error requiring reversal,” in a three-sentence dismissal of their challenge.

Kallman’s clients, poll watchers Cheryl Constantino and Edward McCall, Jr., brought headscratcher claims of a massive anti-Trump conspiracy in the Wolverine State that somehow allowed the outgoing president to get more votes than he did in 2016, when he beat former Secretary of State Hillary Clinton.

“Donald Trump received 5,000 more votes in Detroit in 2020 than he did in 2016,” Detroit’s lead attorney David Fink said during a Nov. 11 hearing, where he compared the parade of baseless claims of electoral shenanigans to an unfunny version of Bill Murray’s “Groundhog Day.”

“There was no complaint in the 2016 election,” Fink noted.

Rejecting the label conspiracy theorist as “name calling,” Kallman claimed the backing of ex-Michigan prosecutor Zachary Larsen helped make his case. Larsen claimed to witness the counting of ineligible voters’ ballots by the absentee voter counting board (AVCB), but Judge Kenny noted there was a problem with that allegation: That’s not how the process worked.

“Mr. Larsen’s concern about verifying the eligibility of voters at the AVCB was incorrect,” the judge found. “As stated earlier, voter eligibility was determined at the Detroit Election Headquarters by other Detroit city clerk personnel.”

The judge found another claim by Larsen that he was prevented from viewing the ballots was “simply not correct.”