Spotted at the U.S. Capitol insurrection with his mother and hopping around the Senate while holding tactical restraints, so-called “zip tie guy” Eric Gavelek Munchel’s image was blasted around the world on Jan. 6—as the chilling portrait of what might have happened if rioters found any politicians as they marauded through the building.

On Friday afternoon, Munchel was ordered released on bail by a federal judge anyway.

“In our society, liberty is the norm, and detention before trial is an exception,” U.S. Magistrate Judge Jeffery S. Frensley announced in explaining his decision.

“I asked the government point blank what [any potential] danger was and they referred to his ‘radicalization’ and the views that he holds” and “his prior actions” in Washington, D.C., the judge noted.

“The court believes that in light of this, Mr. Munchel does not pose an obvious and clear danger to the safety of this community.”

A major factor in his decision, Frensley said, was Munchel’s “apparent and clear respect for law enforcement.”

The judge admitted that this was “counterintuitive” because of the video evidence showing Munchel joining a marauding mob trying to disrupt the certification of a free, fair and lawful election—but Frenlsey contrasted that with multiple videos showing Munchel being deferential to police officers.

“Mr. Munchel is entitled to his opinions,” the judge went on to note. “They are protected by the Constitution. He doesn’t have a right to do what he did, but that’s an issue for another day.”

“Release is appropriate,” the judge ruled, finding that he could impose conditions to protect the community from Munchel until his trial.

“Munchel will be released,” Frensley added, though whether that will actually occur remains an open question.

After several minutes of back-and-forth and another recess, the judge, at the request of the U.S. Department of Justice, temporarily stayed his ruling until 10 a.m. on Monday, Jan. 24. So, while Munchel was ordered released by the court, he will not be able to actually leave until Monday afternoon at the earliest—unless another judge intervenes. That has happened before in Capitol riot cases, such as in the case of U.S. Army Reservist Timothy Hale-Cusanelli, a white supremacist who pined for “War. Civil War.”

Judge Frensley said that hoped Munchel had learned something through all of this, giving the government limited time to change his mind.

Another rioter seen carrying flexicuffs, former U.S. Airman Larry Brock, was previously granted bail even though his prosecutors claimed he aimed to take hostages. Federal prosecutors tried in vain to forestall the same fate with Munchel.

For more than three hours, Assistant U.S. Attorney Ben Schrader pushed to keep Munchel behind bars by repeatedly quoting his boast to a reporter from The Sunday Times that he was ready to “rise up” and “fight if necessary.” He also announced, well before making the formal stay request, that the prosecution would appeal any order of release.

The Getty photograph of Munchel hopping over a banister of the U.S. Senate on Jan. 6 carrying plastic restraints and a Taser chilled many observers, including federal prosecutors.

“There is every reason to think the defendant and his mother would have put those flexicuffs to use if they found lawmakers,” Schrader said.

Judge Frensley described his “visceral” reaction to the footage.

“I have to say that from an emotional standpoint, Mr. Schrader’s arguments have a lot of appeal,” the judge said.

Munchel’s attorney Caryll S. Alpert called it “unfortunate” that the image made her client the “poster child” of the event but that he should be viewed as an individual, not the mob.

“Isn’t that the risk when you make yourself a part of that mob?” Judge Frensley asked.

Offering a surprising defense, Alpert claimed that her client went into the Capitol to protect his mother, Lisa Eisenhart, who made the decision to follow that mob. She found some support for that interpretation in cross-examining an FBI agent.

“Most of what Munchel was doing was following his mother around?” Alpert asked.

Prosecutors emphasized that both were quoted with deadly serious intentions upon entering the Capitol.

Questioning whether the remark was bluster, Judge Frensley pressed the prosecutor: “Is there any evidence that he ‘fucked any shit up’?”

Schrader replied that he has no evidence Munchel destroyed property, but the prosecutor noted that there was no reason to think that his extreme views have changed now that Joe Biden is president.

“You’re not suggesting that we detain him simply because he has views, right?” the judge asked.

“Of course not,” Schrader quickly responded, but he added that detention was necessary because Munchel had acted upon those beliefs in the “most extraordinary way I can conceive.”

Court papers describe the preparations of the duo, decked out in tactical gear, at length.

“After the rally concluded, Munchel—who was dressed in tactical gear and carried a taser on his hip, and stashed other ‘weapons’ in a tactical bag outside the Capitol—unlawfully entered the U.S. Capitol along with a mob of rioters who smashed windows and broke through doors,” Schrader wrote in a 23-page brief. “Munchel gleefully acquired several sets of plastic handcuffs as he walked through the Capitol and entered the Senate chamber, where only moments earlier the Vice President of the United States was certifying the results of the 2020 Presidential election.”

Prosecutors say that Munchel and his mother left most of their weapons outside the Capitol, but mostly for fear that carrying them inside would be a one-way ticket to federal prison.

“In the Senate gallery, Munchel stood with a crowd whose members shouted ‘Treason!’ and lamented the disappearance of lawmakers from the chamber moments earlier,” the prosecution’s brief continues.

Munchel himself was quoted shouting “I want that fucking gavel,” upon entering the gallery.

Four days after the riots, the FBI and Joint Terrorism Task Force executed a search warrant upon Munchel’s home in Nashville, and authorities claim that they located the items that he wore during the Capitol siege: the tactical vest with a “Punisher” comic book and Tennessee “thin blue line” patches; a baseball cap depicting a rifle and a flag; and five pairs of white plastic handcuffs.

Court papers say that authorities found another stash of weapons once they opened the safe.

During the hearing, an FBI agent testified about the 15 firearms recovered from his house, including assault rifles, a sniper rifle with a tripod, other rifles, shotguns, and pistols, and hundreds of rounds of ammunition, pictures of which were in court records. 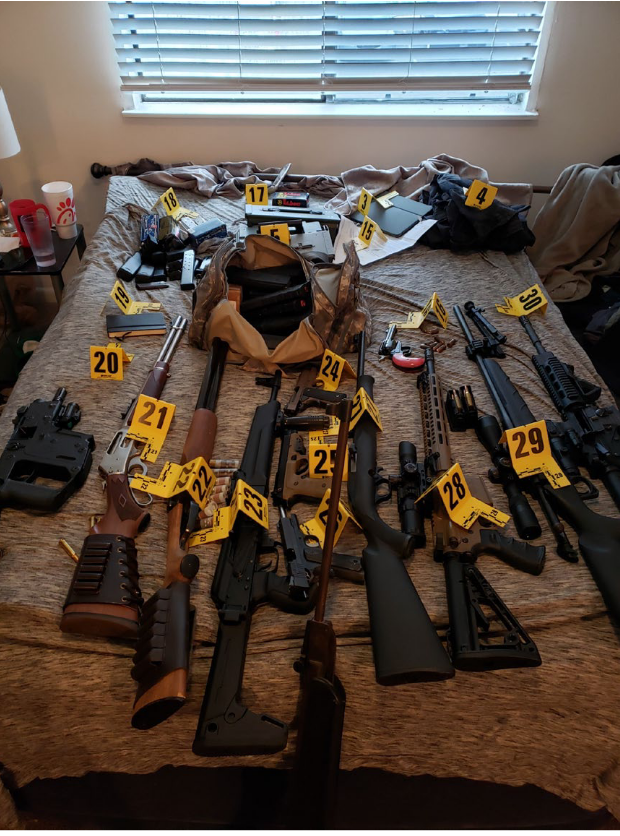 A video on Munchel’s phone shows him and his mother Eisenhart mingling around with Oathkeeper militants, prosecutors say.

“One of the Oathkeepers says, ‘There’s 65 more of us coming,'” the brief states. “Munchel, when he recognizes them, says in affirmation, ‘Oathkeepers,’ and bumps fists with one of the men.”

This is how prosecutors describe Muchel and Eisenhart’s approach to the building:

“As Munchel and Eisenhart approach the Capitol, a man can be heard shouting, ‘Congress is shut down! Tear gas packages thrown in the Congress!’ Eisenhart exclaims, ‘They got tear-gassed, motherfuckers! Oh my God. That is [unintelligible] my best day, to know that they got tear-gassed.’ Other people in the crowd can be heard screaming, “Fuck that, this is our house!”As MUNCHEL and Eisenhart crawl through a broken metal guardrail outside the Capitol, MUNCHEL can also be heard saying, “Hell yeah, baby!”

The court summarily dismissed most of the government’s arguments made throughout the course of the marathon session–including Munchel’s alleged affinity for the far-right anti-government militia, determining that the implication simply wasn’t enough.

But Frensley previously showed his hand during a blistering interrogation of Schrader during the government’s closing argument.

“Is there any evidence that he fought anyone?” the judge asked. The government conceded there was none.

Frensely then asked Schrader whether there was any evidence Munchel negatively interacted with law enforcement during the siege. The government attorney paused then claimed that Munchel’s mother shouted at a cop with her boy at her side but again conceded that there was no evidence Munchel himself did that or anything similar.

Then the judge gave the game away.

He noted that the identification of Munchel prior to the FBI’s arrest warrant being issued was strictly due to the efforts of “private citizens” on social media. But he technically phrased this in the form of a question. After a long pause, Schrader answered: “Correct.”

Frensley added that if Munchel immediately turned himself in, there wouldn’t have been anything to turn himself in for because there wasn’t an active criminal case until several days later. This statement was also delivered with all the tone of a question but the content told the real story.

Another “correct” followed another long pause from the government on that front as well.

At another point, Frensley appeared more than askance there was any “future danger” from the defendant and asked the government if that was what they were arguing.

Slightly exasperated, Schrader said “I don’t know what form that will take,” but insisted that Munchel’s conduct and beliefs should be considered together.

The judge also sounded aghast when the government attorney said the video evidence was all the court needed to deny the bail request.

Frensley, his voice rising, said the video evidence is what the government needs to sentence him with and that such evidence isn’t what the court, during a detention hearing, is supposed to make a decision on when considering a bail request.

“Why is that enough?” he asked the assistant U.S. Attorney.

“People died, okay? People died!” Schrader all-but shouted back. “The conduct of that video speaks volumes about what Mr. Munchel is willing to do.”

“I won’t disagree that it’s shocking conduct,” the judge said–but he clearly disagreed with the legal argument.

Though today’s hearing took place in the Middle District of Tennessee, Munchel’s case will later be transferred to a federal court in Washington, D.C. His defense attorney promised that her client would stay with his second “mom,” who did not participate in the insurrection, if and when he is eventually released.