Individual in black was identified by authorities as Eric Gavelek Munchel.

A man recently charged for participating in the storming of the U.S. Capitol last week also possessed a Taser that day, according to a federal affidavit. This is Eric Gavelek Munchel, 30. He’s the masked individual seen possessing zip ties in the Senate chamber, authorities said.

In newly released court documents, authorities said that law enforcement actually encountered Munchel at the Grand Hyatt Hotel. When stopped, he gave his name as “Eric Munchel.” He has since become known online as “zip tie guy.” He has also grabbed a headline for being a “MAGA Mommy’s Boy.”

Capitol rioter, 30, pictured carrying zip-ties is revealed to be Nashville bartender who stormed Congress with his MOM https://t.co/5qxWjEeW8G pic.twitter.com/DpTN7HqFCH

Authorities interviewed Munchel and noted he had a black and yellow Taser. Munchel allegedly said he had it for self-defense as he participated in the Trump rally that day.

That rally would prove to be momentous. President Donald Trump repeated his lies that he actually won the 2020 presidential election, and that it was stolen from him.

Four Trump supporters died in the chaos. One Capitol police officer died as well; Officer Brian Sicknick’s death is being investigated as a possible murder. Howard Liebengood, the son of a former Senate sergeant-at-arms, died by suicide on Saturday.

Munchel is charged with one count of knowingly entering or remaining in any restricted building or grounds without lawful authority and one count of violent entry and disorderly conduct on Capitol grounds. In announcing the charges against him, the Department of Justice described him as possessing plastic restraints, and a cell phone mounted on his chest, which they suggested was for recording purposes. They also said he had what they vaguely described as “an item in a holster on his right hip.”

According to documents, investigators were able to tie Munchel to the scene because of hotel lobby surveillance footage in which his face was uncovered; he otherwise seemed to wear the same clothing. They also noted that people online identified him in part through his now-inaccessible Facebook account. 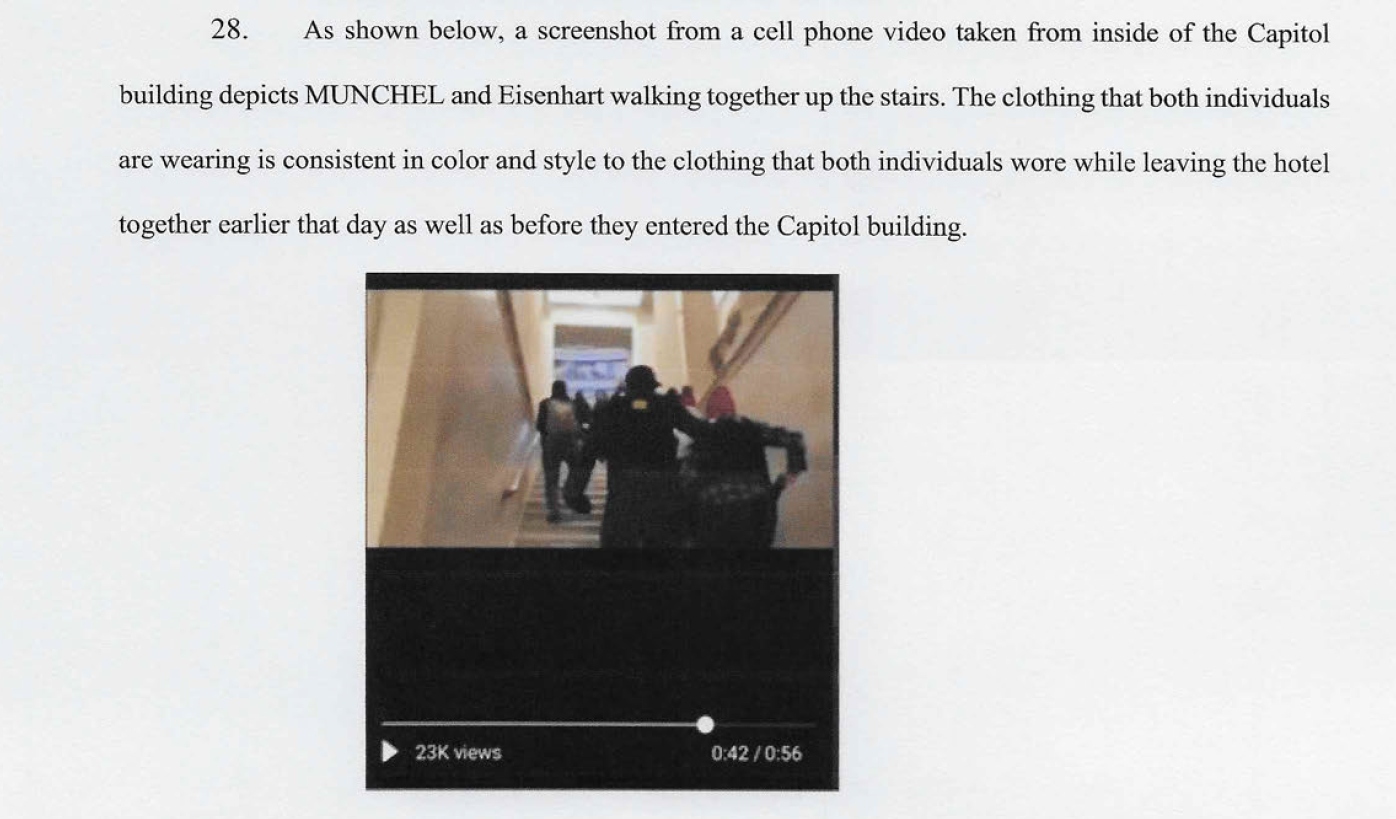 Investigators said Munchel was seen walking on the Capitol grounds with a woman named Lisa Eisenhart. She has been identified as his mother.

“We wanted to show that we’re willing to rise up, band together and fight if necessary. Same as our forefathers, who established this country in 1776,” said Eric Munchel, who had driven from Nashville, Tennessee, with his mother, Lisa Eisenhart. pic.twitter.com/u3xMltdHdm

The duo was also both spotted together at the Grand Hyatt Hotel, and walking up stairs inside the Capitol Building, investigators said (see the image above).

You can read the affidavit here: