Texas Man Brought His Girlfriend with Him to ‘Take on the Revolution’ at Capitol, Documented It All on Social Media and Was Arrested 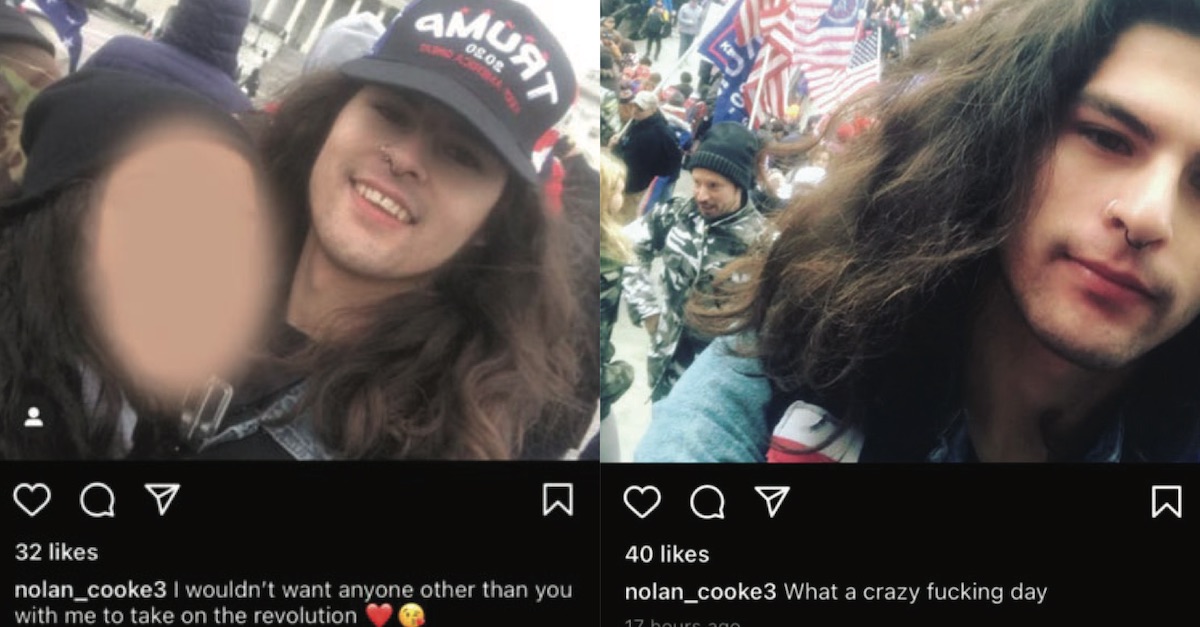 A 22-year-old Trump supporting Texas man has been charged for his role in the storming of the Capitol on Jan. 6. Like many other defendants, Nolan Cooke made the investigative work easy for the FBI, documenting his whereabouts, identity and activities on Instagram, Snapchat and TikTok.

According to the Department of Justice, Cooke was arrested on Thursday in the Eastern District of Texas. Much of the evidence was out there in the open for the feds to see, according to the affidavit:

The FBI has conducted open source research of COOKE’S social media. Your affiant reviewed an approximately 28-second video that was uploaded on January 13, 2021, at around 2:00PM Eastern Time, to a TikTok account under the username of @nolan.cooke98/amos: cookie03121998. The video appears to show a crowd of individuals shoving their way through a group of police officers (likely U.S. Capitol Police) in front of the Capitol (believed to be the East side of the Capitol). This video appears to have been taken from a “GoPro” style camera. While reviewing the video, your affiant observed long brown hair dangle in front of the camera lens similar to the long brown hair depicted in COOKE’s driver’s license photo and images of himself on Instagram account “nolan_cooke3.”

In the above-described TikTok video, your affiant can see the sleeve of what appears to be a denim jacket or shirt. Your affiant has observed two photos of COOKE that were posted on Instagram account“nolan_cooke3”on January 6, 2020. In both photos, COOKE appears to be wearing a denim shirt or jacket. According to open source information, the first photograph of COOKE (with a female believed to be COOKE’s girlfriend) included a caption that noted, “I wouldn’t want anyone other than you with me to take on the revolution.” The second photo had the caption, “What a fucking day.”

The FBI said that one tipster said Cooke posted a CNN video showing the defendant inside that Capitol. “I made the news,” he said, according to that person.

Law enforcement said that a judge authorized a search of Cooke’s residence on Jan. 20. Once the feds were there, Cooke “agreed to be interviewed voluntarily” and he “was not under arrest at this time and was not given Miranda warnings,” the affidavit said.

The FBI claims Cooke stated and admitted that he saw Donald Trump’s tweet about the Jan. 6 rally, drove to D.C. with his girlfriend and a relative, and brought firearms but left those in the relative’s vehicle.

“COOKE came to the Capitol because he wanted to be heard,” said the FBI, describing Cooke’s statement.