Boyd Camper Charged After Boasting of Role in Capitol Attack

‘We’re Going to Take This Damn Place’: Capitol Hill Insurrectionist Who Bragged to the Media is Charged With Multiple Crimes 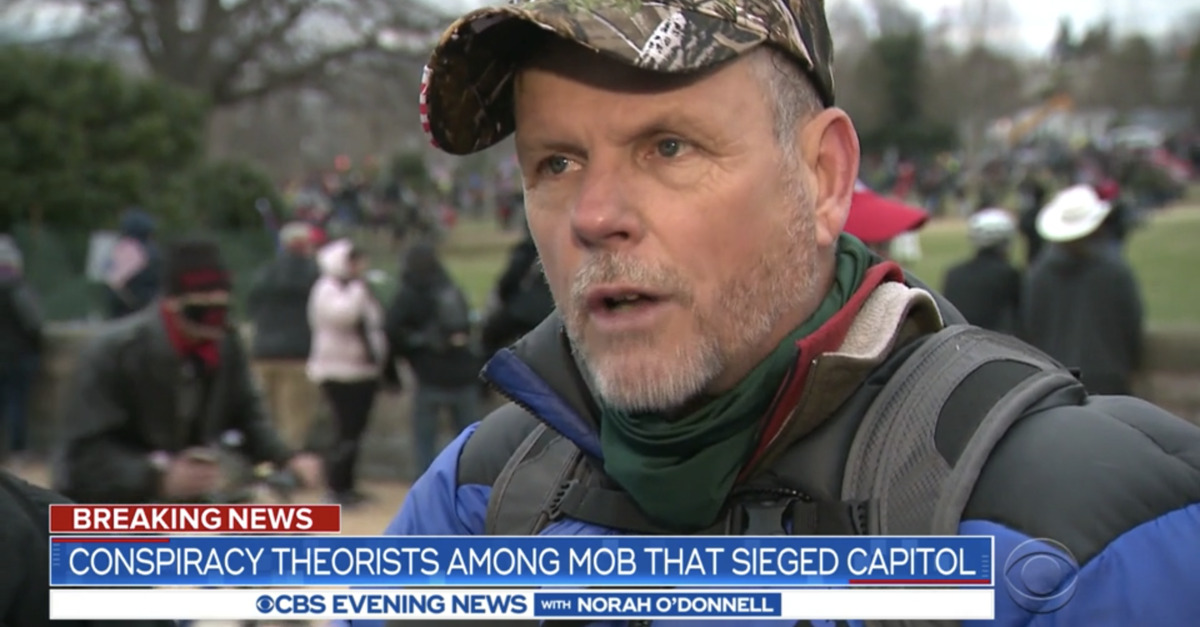 Boyd Allen Camper proudly told the national news media that he took part in the Jan. 6 siege of the U.S. Capitol Complex. On Friday, in a federal district court, he was charged with four federal crimes.

The defendant appeared in a widely-shared CBS News interview the day after the riot.

“You were inside the Capitol?” a reporter asks.

To which Camper responds: “I was on the front line.”

“We’re going to take this damn place,” he adds later. “If you haven’t heard it’s called the insurrection act and we the people are ready.”

“Camper confirmed his presence inside the Capitol Building during a video interview with CBS News that was subsequently posted online,” the court papers read. “In the video, the interviewer introduced a person on the grounds outside the Capitol building as Boyd Camper from Montana. Wearing a blue jacket and camouflage hat, Camper acknowledged that he was inside of the Capitol.”

Relying on five unidentified witnesses alleged to be “associated with Camper throughout the events” on the day in question, federal prosecutors say that Camper repeatedly spoke of his participation in the abortive insurrection in the days immediately after.

One witness allegedly posted a “twenty-one second video to social media that recorded Camper participating in the events that day.” A second witness said he took part in the “storming of the Capitol.”

“When Witness #3 observed Camper at the Capitol grounds, Witness #3 described Camper as ‘energized,’ and according to Witness #3, Camper stated that he was ‘going to the top,'” according to the complaint. “Later that evening, Witness #3 heard Camper acknowledge that he was inside the Capitol, and that he also spoke with reporters. Law enforcement also interviewed Witness #4 and Witness #5, who observed Camper in person during the events of January 6, 2021, and both witnesses stated that Camper was in possession of a Go-Pro camera on that day.”

Additional, non-public footage reviewed by the FBI allegedly shows Camper inside the Capitol Rotunda “holding what appears to be a camera on a stick,” the document notes, which appears to be the aforementioned Go-Pro.

The charging documents relay how the interview went:

During the interview, Camper acknowledged that he was present on the Capitol grounds on January 6, 2021, and that he eventually entered and went inside the Capitol building. Specifically, Camper stated that, after the rally, he walked with some associates to the Capitol grounds, and saw people confronting the police. He acknowledged that he “picked the right hole” to get himself to a stairway area and could see that the police lines had been broken. He could see that persons were pushing to get inside the building, and he knew that persons were getting tear-gassed. Camper stated that he believed he was in the frontline of the situation, and that “in my mind, we were going to take the Capitol steps.” Camper stated that he saw a door being held open, and that he entered the Capitol through a small door that led to the Rotunda, and then proceeded to a room with statues.

“During the interview, Camper acknowledged that he was in possession of a Go-Pro camera during the time that he was inside the Capitol building, and that the contents would implicate him,” the complaint continues.

Camper faces a statutory maximum of four years in prison if convicted.

The full complaint is available below: