Favoring Your Romantic or Sexual Partner at Work Is Not Sex Discrimination: 9th Circuit 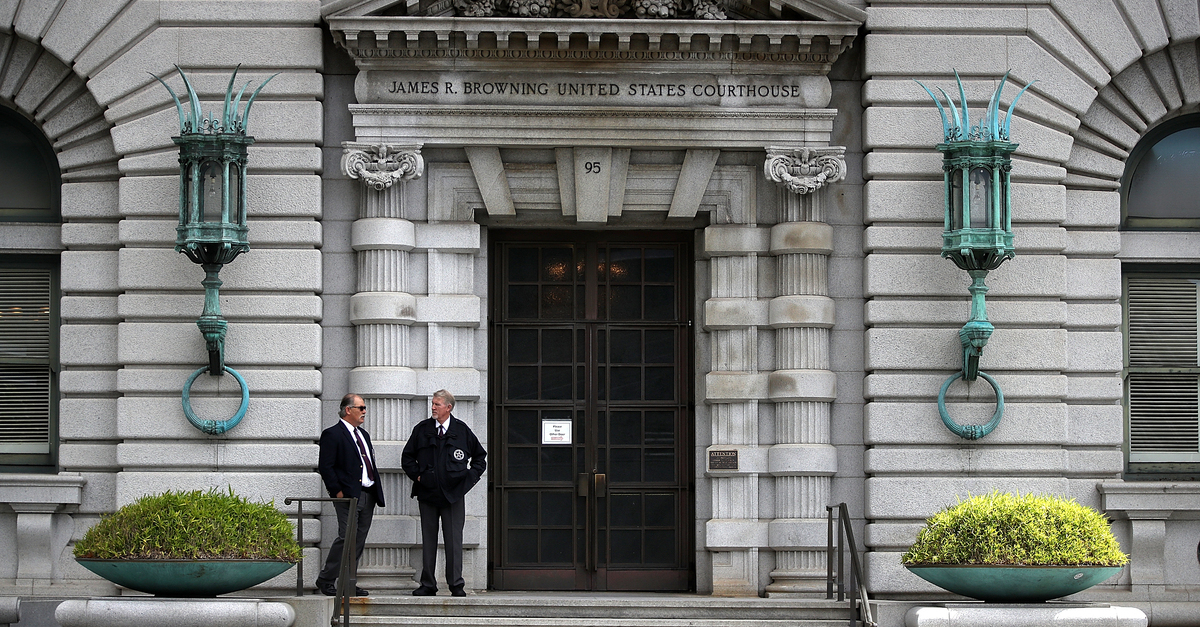 Security guards stand in front of the Ninth U.S. Circuit Court of Appeals on June 12, 2017 in San Francisco, California.

Title VII of the Civil Rights Act of 1964 does not outlaw business favoritism based on who you’re having sex with or are otherwise romantically involved with at work, according to a recent opinion from the U.S. Court of Appeals for the Ninth Circuit.

The case, stylized as Maner v. Dignity Health, is about a group of four obstetric and gynecological professionals who used to work together. Most of them don’t anymore–except for the two who slept together.

William “Bo” Maner was previously employed as a biomedical design engineer in Dr. Robert Garfield‘s laboratory “for several decades.” The lab itself is funded through what the 9th Circuit terms “a steady stream of grant awards to fund employee salaries.” The lab’s goal is to publish research and develop “marketable intellectual property.” Two other relevant coworkers in the case are, in the court’s words: Dr. Yuan Dong, “a male researcher,” and Dr. Leili Shi, “a female researcher.”

The opinion indicates that everybody knew what the boss was doing with Shi–and what Shi was doing with Garfield. Maner said the relationship was no secret and previously acknowledged that he was made aware of the workplace couple–whose relationship began as an affair during the boss’s prior marriage–soon after being hired. For years it worked out.

In 2008, the lab was moved from Texas to Phoenix, Ariz. Garfield convinced Dignity Health to keep his whole team on. Everyone agreed and were on their way west when Maner found himself in trouble.

“Maner accepted the offer and prepared to join Garfield, Dong, and Shi in Phoenix,” Circuit Judge Carlos Bea notes. “That April, however, Maner was arrested at work in Galveston by state and local police for the alleged aggravated sexual assault of his seven-year-old daughter.”

As extreme as the charges were, however, Garfield kept Maner on–ultimately allowing him to work remotely for the next couple of years.

In 2010, the grants dried up. Garfield recommended Dong’s position be terminated. Dong responded by complaining about the romantic relationship between the boss and Shi.

“Dignity Health responded by assigning Dr. Ron Lukas to investigate the relationship,” the court notes. “During an interview with Lukas about Garfield and Shi, Maner raised no concerns about the couple’s relationship or its impact on other employees. Upon conclusion of the investigation, Dignity Health reassigned Shi to a different supervisor on paper but allowed Shi to continue working in the lab with Garfield.”

The next year it was Maner’s turn on the chopping block. Garfield submitted what the court called “a highly negative review of Maner’s performance since the beginning of the remote work arrangement.” That review chalked up a great deal of the alleged deficiencies with the remote work arrangement and recommended the employee come back to the office in lieu of being fired. Unfortunately for Maner, he was precluded from leaving the Lone Star State after reaching a plea agreement that saw the original charges tossed.

In response to being fired, Maner filed a slew of complaints–first with the business itself and then with the U.S. Equal Employment Opportunity Commission. After those remedies were exhausted, he filed a lawsuit in federal court alleging Title VII retaliation by claiming that he was terminated “for protesting Garfield’s favoritism toward Shi at the expense of other employees,” according to the court summary.

Maner lost at the district court level because the lower court found that Garfield’s relationship with and preference for Shi did not qualify as sex discrimination under Title VII.

Rather, the district court said, Maner had simply alleged Garfield had a “paramour preference” for Shi–something no one disputed. And, while the 9th Circuit had yet to decided on whether a such a preference triggers Title VII liability, nearly every other circuit in the country–along with the EEOC itself–had rejected that theory of liability.

Maner appealed, at first pro se and then with the help of a court-appointed attorney, arguing that an employer engages in unlawful sex discrimination whenever a supervisor’s relationship with a sexual or romantic partner results in an adverse employment action against another employee under both the statutory language of Title VII and under the U.S. Supreme Court’s recent interpretation of the law in Bostock v. Clayton County.

The appellate court affirmed the prior dismissal in favor of Dignity Health.

“Binding precedent and ordinary principles of statutory interpretation compel us to agree with the other circuits and the EEOC that Title VII does not ‘prevent employers from favoring employees because of personal relationships . . . as long as [such favoritism] is not based on an impermissible classification,'” the court found. “We hold that an employer who singles out a supervisor’s paramour for preferential treatment does not discriminate against other employees ‘because of [their] . . . sex.'”

The appeals court said their analysis here “begins, and pretty much ends, with the Supreme Court’s decision in Bostock” and cites Justice Neil Gorsuch‘s “all-purpose test for assessing whether an adverse employment action violated Title VII.”

Here’s that tidy analysis from the decision:

Maner’s “paramour preference” reading of Title VII fails Bostock’s test. To determine whether an employer discriminated based on sex in violation of Title VII, we ask “if changing the employee’s sex would have yielded a different choice by the employer.” In the “paramour preference” scenario, the answer is no. The employer discriminates in favor of a supervisor’s sexual or romantic partner and against all other employees because they are not the favored paramour, no matter the sex of the paramour or of the complaining employees.

“Changing the sex of the complaining employees would not yield a different choice by the employer because the identity of the favored paramour would remain the same,” the court went on to explain. “The motive behind the adverse employment action is the supervisor’s special relationship with the paramour, not any protected characteristics of the disfavored employees.”