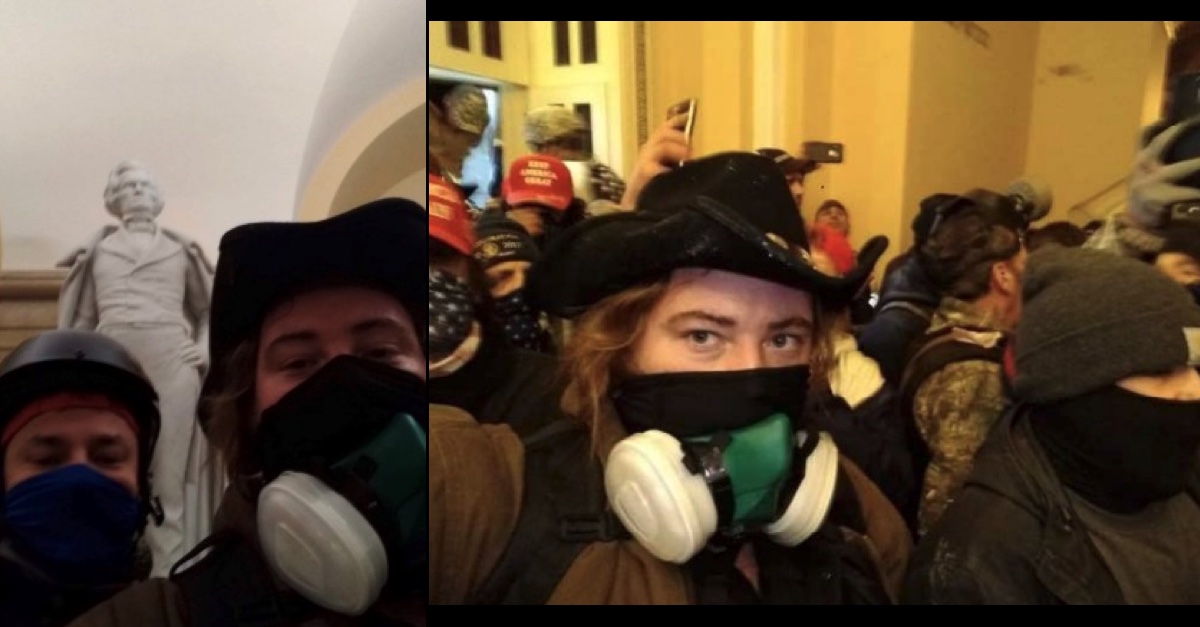 Andrew Hatley poses in front of a statue of John Calhoun (L), and as part of the crowd rioting at the Capitol on Jan. 6. (courtesy FBI)

A South Carolina man who wore a black cowboy hat and gas mask to the Jan. 6 insurrection at the U.S. Capitol, and took a picture of himself in front of one of the antebellum South’s most vocal proponents for the expansion of slavery, has been sentenced to 36 months of probation.

Andrew Hatley, 34, pleaded guilty in September to one misdemeanor count of parading, demonstrating, or picketing in a Capitol building. He had also been charged with disorderly conduct and entering a restricted building or grounds without permission.

Hatley entered the Capitol through a broken window and eventually made his way to the crypt of the U.S. Capitol building, where he took a photo of himself in front of a statue of John Calhoun, a former Vice President and lifelong defender of slavery.

Hatley told Senior U.S. District Judge Thomas Hogan that he had paid a high price for his actions at the Capitol.

“I forget the author that said it, but a saying that stuck with me is ‘That which is most personal is most universal,'” Hatley said, apparently quoting psychologist Carl R. Rogers. “If that’s true then whatever you throw at me probably isn’t enough. [I’ve] lost family over this, I’ve lost friends. Half the people that I’ve known all my life won’t speak to me anymore.”

Hatley said he had good intentions when he went to the Capitol, and essentially got caught up in the crowd.

“I went down there try to come off the road, build a life, make some friends,” Hatley said. “I saw all that was going on up there and I just got acclimated to it as the crowd got denser and denser.”

“Going in [to the Capitol building] wasn’t right and probably coming down here wasn’t right to begin with,” Hatley added. “I wish I hadn’t. Grains of sand make a heap, and I was one of them.”

As to why he brought a gas mask, Hatley said that he had heard about other riots, including the so-called “Million MAGA March” demonstrations in late 2020, where people had used “bear mace,” and didn’t think he’d be able to escape if he were targeted.

“I weigh over 300 pounds, Your Honor,” Hatley said to Hogan. “I can’t run very well in the best of times. Better bring that in case I get maced, because I wouldn’t get very far.”

Hogan told Hatley that he believed that he was sorry for his actions.

“I think you have shown true remorse,” Hogan said. “I have no question about that. You have faced up to the reality of your situation, what you did, you’re regretful for that … I think you’re regretful that you got into this, and were misled, I think, by others.”

However, Hogan did express concern over one of Hatley’s social media posts where he appeared to suggest that he wasn’t part of the pro-Donald Trump mob that swarmed the Capitol on Jan. 6.

“It has come to my attention that there was someone who looks like me at the Capitol,” Hatley wrote in a social media post, according to the FBI. “I’d like to set the record straight. I don’t have that kind of motivation for lost causes. I just don’t care enough anymore, certainly not enough for all that.” 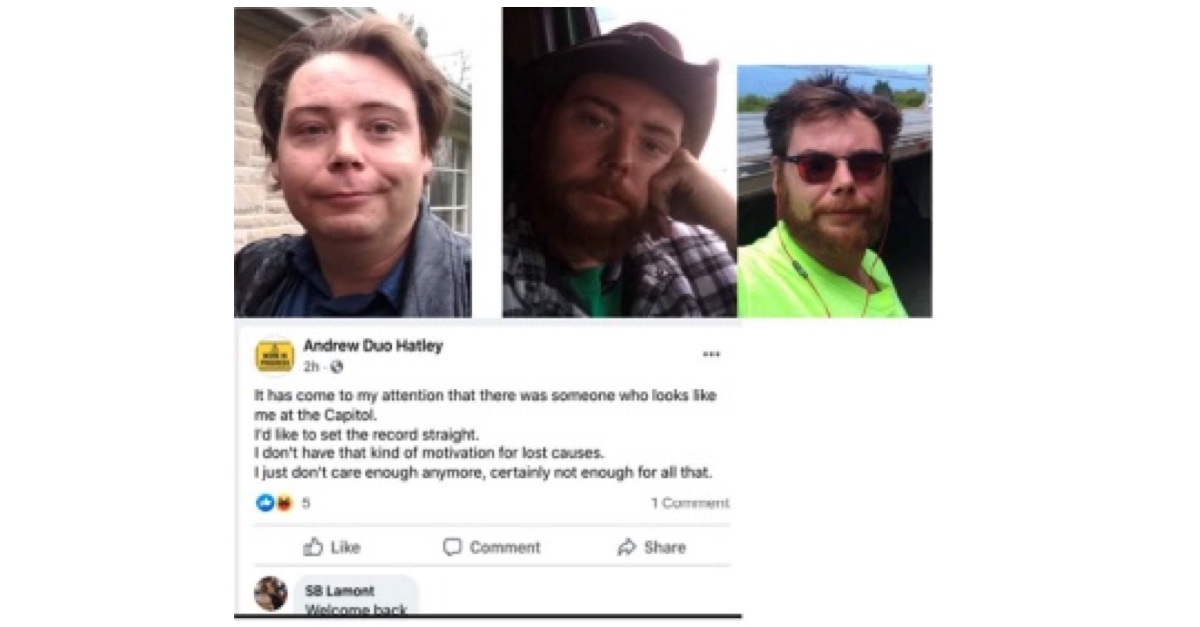 Prosecutors had asked for two months of home confinement, but Hatley’s job as a long-haul truck driver complicated things: he told Hogan that he is normally on the road for as long as he can, with only a few days in between jobs. During that time, he said stays with a friend in South Carolina, sleeping on their couch.

In the end, Hogan decided that Hatley’s job, his lack of criminal history, and his “true contrition” led him to conclude that probation would be an appropriate sentence. But Hogan made it clear that other defendants shouldn’t necessarily expect the same thing.

“Probation is not automatic in this court,” Hogan said.

Hogan, a Ronald Reagan appointee, took time during the hearing to focus on efforts to reframe the violent attempt by Trump supporters to stop the counting of Electoral College votes and certification of Joe Biden’s win in the 2020 presidential election.

“I think there is a narrative being pushed by certain groups in this country that nothing really happened, and that’s something that we need to dispel,” Hogan said. “It’s a serious attack on our democracy, an attempt to overthrow our democratic process and essentially have a coup in the U.S. where a non-elected official would take over as president.”

Hogan said that Hatley had also fallen under the spell of “false prophets,” and referred to claims by Trump and his allies that there was widespread voter fraud in the 2020 presidential election was a “big lie that’s been pushed by various individuals, unfortunately.”