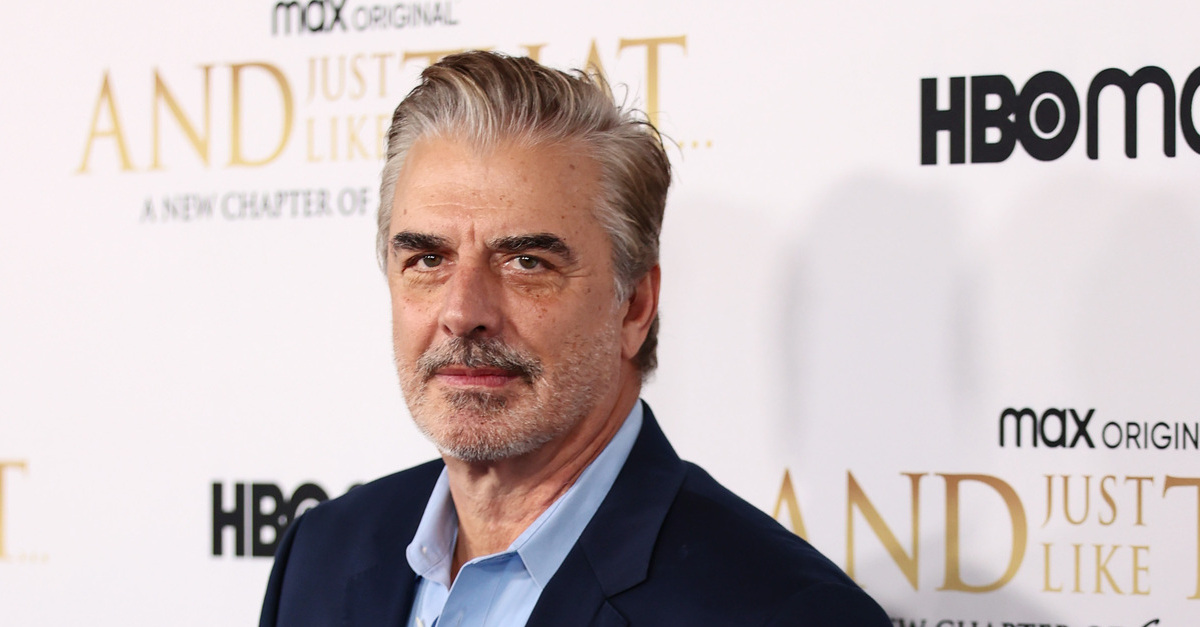 Chris Noth attends HBO Max’s premiere of “And Just Like That” at Museum of Modern Art on December 08, 2021 in New York City.

And Just Like That, actor Chris Noth went from being eulogized to resurrected to accused of sexual assault.

Less than a week ago, Noth reprised his character, Mr. Big, in the much-anticipated Sex and the City sequel. Noth’s performance has reportedly led two women to go public with decades-old accusations of sexual assault against him. Noth says he “categorically denies” the “false” allegations.

The Hollywood Reporter published a story Thursday detailing the accounts of two women identified by pseudonyms as 40-year-old Zoe, and 31-year-old Lily.

Zoe alleges that when she was 22 in 2004, she worked at a firm where Noth and other celebrities conducted business. Zoe alleges that Noth often flirted with her, sometimes leaving flirtatious messages on her office voicemail — a phone number Noth obtained without Zoe providing it to him.

Explaining that these events took place during a time that she described as “peak Sex and the City,” Zoe offered that Noth was “like a god” to her and her colleagues. Zoe says that she and a friend once visited Noth at his apartment where the two sat with him in his jacuzzi.

At one point, Zoe went into Noth’s apartment to return a book he had shown her. Upon walking inside, Noth allegedly kissed her as she stepped through the doorway. When Zoe attempted to pull away and return to her friend, Noth allegedly “pulled off her shorts and bikini bottom, and began to rape her from behind.” Zoe describes facing a mirror during the incident, which she describes as “very painful.” She says she also yelled, “stop,” and asked, “Can you at least get a condom?” According to Zoe, Noth did not stop and instead laughed at her request.

Zoe says that after the assault, she realized there was blood on her shirt, which was later seen by her friend. That friend also spoke to THR and said that “Zoe was strikingly different when she returned from Noth’s apartment,” changing from a gregarious and friendly person to someone who was “very aloof.” When Zoe’s friend noticed her acting suspiciously on the night of the alleged attack, the friend urged her, “You have to tell me what happened. Something’s wrong.” and insisted on taking Zoe to Cedars-Sinai Hospital.

At the hospital, the young women told hospital staff that Zoe had been sexually assaulted, but did not name the perpetrator. Zoe says she received stitches, and was given a crisis counseling brochure and medicine. Cedars-Sinai Hospital does not keep records dating back to 2004.

Zoe’s former boss corroborated Zoe’s account to THR, saying that Zoe did indeed name Noth when she told him about the alleged rape later that day. According to the boss, she complied with Zoe’s request not to report the incident. “I was 25 at the time,” the boss explained. “It was a lot. I didn’t know what to do,” noting that this occurred before the #MeToo movement.

Zoe says that she endured lasting effects from the attack; in 2006, she attended counseling at the UCLA Rape Crisis Center. The Hollywood Reporter says it verified that Zoe did need receive treatment from the center for several months.

The woman known as “Lily” had been a server at a New York nightclub where she says she met Noth in 2015, when she was 25 and Noth was 60. Lily says she was “starstruck” when Noth spoke to her and eventually asked her out to dinner at the restaurant featured in the Sex and the City episode celebrating the fictional Carrie Bradshaw’s 30th birthday.

Lily alleges that when she and Noth arrived, the kitchen had closed. After the two had drinks, they continued on to his nearby apartment. Lily says Noth “tried to make out” with her, and that she “cautiously entertained it.” She says “I should have said no more firmly and left. And then the next thing I knew, he pulled down his pants and he was standing in front of me.” At that point, Lily says Noth “thrust his penis into her mouth.”

Noth then had sexual intercourse with Lily “from the back in a chair” while Lily cried. Afterward, Lily says she called an Uber. Lily’s friend Alex says Lily telephoned her from the ride, detailing that Noth had “‘pretty forcibly’ had sex with her.'” Alex said she urged Lily to call the police, but Lily refused.

By the next day, Alex says Lily had started trying to minimize the incident. “She said, ‘I’m overreacting, just forget it.” But Alex says she listened to a voicemail that Noth had left on Lily’s phone. “It was, ‘Hey, hope you didn’t take anything wrong last night. We had fun. Just want to make sure you didn’t take it the wrong way.’” To Alex, it seemed “very much, ‘I know I did something bad, but I’m trying to make it seem like it wasn’t a big deal.’” Lily remembers that message a bit differently. “He left a voicemail saying, ‘I had a nice time and would really appreciate it if you wouldn’t talk to your girlfriends. If we could keep this between you and me, that would be great,’” she says.

THR reports that it reviewed texts afterward between Noth and Lily from March and April of 2015:

In one, Noth messaged: “By the way I have to ask did you enjoy our night last week. I thought it was a lot of fun but I wasn’t quite sure how you felt.” Lily replied: “Hmm…I certainly enjoyed your company. Great conversation. Not to go into specifics over text message, but I did feel slightly used… Perhaps this is better as a phone conversation but I can’t talk at the moment.” Noth mentioned hoping to meet again for dinner or drinks. Lily continued to respond in a friendly but noncommittal way. At one point, she agreed to dinner, then canceled. She continued to put him off, and they never met again.

When reached by Law&Crime for comment, Chris Noth denied all allegations against him, providing an email statement through his representative as follows:

The accusations against me made by individuals I met years, even decades, ago are categorically false. These stories could’ve been from 30 years ago or 30 days ago — no always means no — that is a line I did not cross. The encounters were consensual. It’s difficult not to question the timing of these stories coming out. I don’t know for certain why they are surfacing now, but I do know this: I did not assault these women.