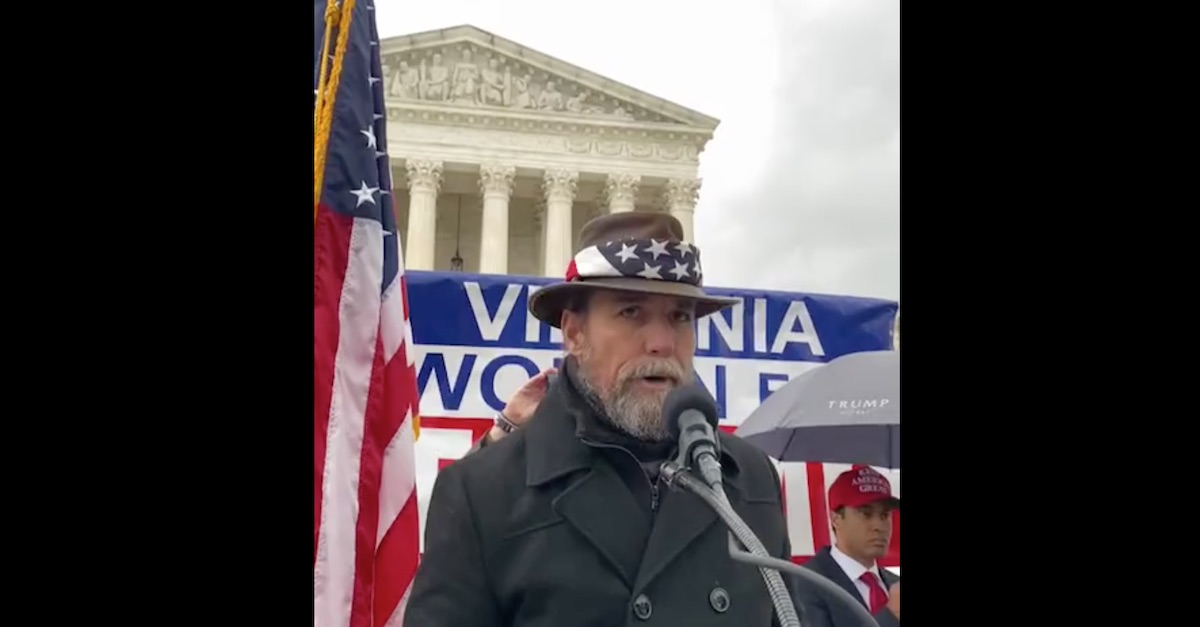 Alan Hostetter on outside of the Supreme Court, his Instagram account says, for the “Virginia Women for Trump/American Phoenix Project Rally on 1/5/2021.”

Six members of the militia group known as the Three Percenters have been charged with the siege of the U.S. Capitol on Jan. 6th, in an indictment filled with chilling fantasies of executions and chatter about weapons and “insurrection.”

Two of the men charged—Alan Hostetter and Russell Taylor—were reportedly seen with Donald Trump’s friend and advisor Roger Stone the day before the riot. Their accused conspirators are Eric Scott Warner, 45; Felipe Antonio “Tony” Martinez, 47; Derek Kinnison, 39; and Ronald Mele, 51. Hostetter is a former police chief in California, a yoga instructor, and a “Stop the Steal” organizer. Stone, a self-described dirty trickster who has been tied to multiple accused rioters, has not been charged with wrongdoing.

According to prosecutors, the California men were drawn to the Capitol in response Donald Trump’s widely criticized tweet on Dec. 19th. The then-lame duck president urged his backers to descend upon the Capitol the following month: “Big protest in D.C. on January 6th. Be there, will be wild!”

The sextet of Three Percenters—the name of a militia group taking its name from the erroneous belief that only 3% of American colonists opposed the British during the Revolutionary War—have their chilling alleged communications preparing for the event quoted throughout a 20-page federal indictment.

At the center of that document is Stone associate Hostetter, who created another organization said to have been involved in the planning. 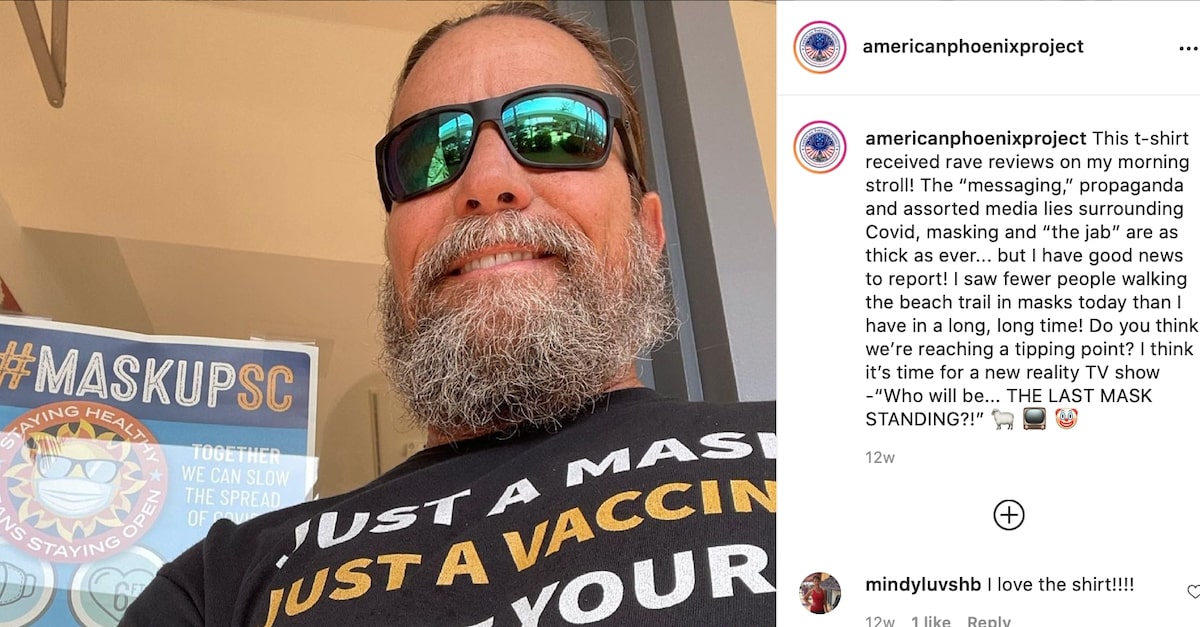 The founder of the American Phoenix Project, Hostetter founded the group in opposition to COVID-19 lockdowns and restrictions, but the group morphed in the post-2020 election cycle to efforts to topple now-President Joe Biden’s victory. (The group’s website, filled with conspiratorial rhetoric, merchandise sales, and YouTube videos, remains active.)

That’s not hyperbole when we call it tyranny, that’s fucking tyranny. And tyrants and traitors need to be executed as an example…. In example…. I’m going to D.C. I’m going to be there on Saturday for this march. I hope there are a million Patriots there. Between that, that’s going to be a shot across the bow of the deep state when they see a million Patriots surrounding that shit hole of a city— the swamp. Because it’s gonna make all those swamp creatures know that at any time we want we’ll come back with a million Patriots and we’ll surround that city.. There’s gonna be a million of us showing up to make this statement here in Washington, D.C., and I’m telling the swamp right now, that we will be back if this doesn’t get resolved peacefully and soon.

Hostetter had been referring to the so-called “Stop the Steal” rally in late November, and he hosted another one like it in Huntington Beach, Calif. on Dec. 12, where prosecutors say he echoed the same violent rhetoric in a speech.

There must, absolutely must, be a reckoning. There must be justice. President Trump must be inaugurated on January 20th. And he must be allowed to finish this historic job of cleaning out the corruption in the cesspool known as Washington, D.C. The enemies and traitors of America both foreign and domestic must be held accountable. And they will. There must be long prison terms, while execution is the just punishment for the ringleaders of this coup.

Russell Taylor also attended that rally, and the two of them were active on a Telegram, an encrypted social media app that became popular with the political far-right after Twitter and Facebook purged many of their ranks from their platform.

This is the date of the Joint Session of Congress in which they will either accept or reject the fake/phony/stolen electoral college votes. I will be there, bullhorns on fire, to let the swamp dwellers know we will not let them steal our country from us. I hope you can join me!! #fightfortrump #stopthesteal #savetherepublic

Prosecutors say that Hostetter and Taylor booked rooms at the Kimpton George Hotel in Washington, D.C. for several days before, during and after the siege. The pair started organizing on Telegram shortly after that, according to the indictment.

a. HOSTETTER texted, “I’ll be heading to DC on 12/31. Let’s hook up on 12/30 so you can give me your backpack,” followed by three hatchet emojis.
b. TAYLOR responded, “Oh shiz. I need to pack that up. Alan are you bringing firearms?”
c. HOSTETTER texted back, “NO NEVER (Instagram now monitors all text messages.. this has been a public service announcement),” followed by three emojis of faces laughing with tears coming out of their eyes.

On Jan. 2, Taylor responded to a query in the DC Brigade Telegram chat regarding what weapons could be carried in the nation’s capital by answering a “'[h]atchet,’ ‘[b]at,’ or ‘[l]arge metal flashlight,'” according to the indictment.

“Only 3% of Americans actually fought in our War of Independence,” Hostetter allegedly claimed, inaccurately. “There will likely be 3% of us again that will commit fully to this battle but, just as in 1776 patriots will prevail. Things are going to come to a head in the U.S. in the next several days. Stay tuned!”

Prosecutors say that Taylor spoke at the Virginia Women for Trump rally the day before the siege, and he appeared to relish the pro-Trump mob’s actions on Jan. 6th, boasting on a Telegram chat late that afternoon: “I was pushing through traitors all day today. WE STORMED THE CAPITOL! Freedom was fully demonstrated today!”

Hostetter likened it to the “shot heard round the world” and called that day a prelude to a protracted war, the indictment states.

“That war lasted 8 years,” Hostetter is quoted saying, in reference to the American revolution. “We are just getting started.”

In response to an unidentified person asking him what happens next, Taylor allegedly texted back: “Insurrection!”

The grand jury charged all six with conspiring to obstruct and official proceeding, obstructing an official proceeding, and two counts of entering a restricted building or ground. Taylor is charged with unlawful possession of a dangerous weapon on Capitol grounds and obstructing law enforcement during a civil disorder. Kinnison and Warner each face a charge of tampering with documents.

Shedding light on the seventh count, Kinnison is quoted in the indictment as having written: “I think we should clear all text in this chat the morning of the 5th just in case for opsec purposes.”

[Image via video screengrab of Instagram/@americanphoenixproject]