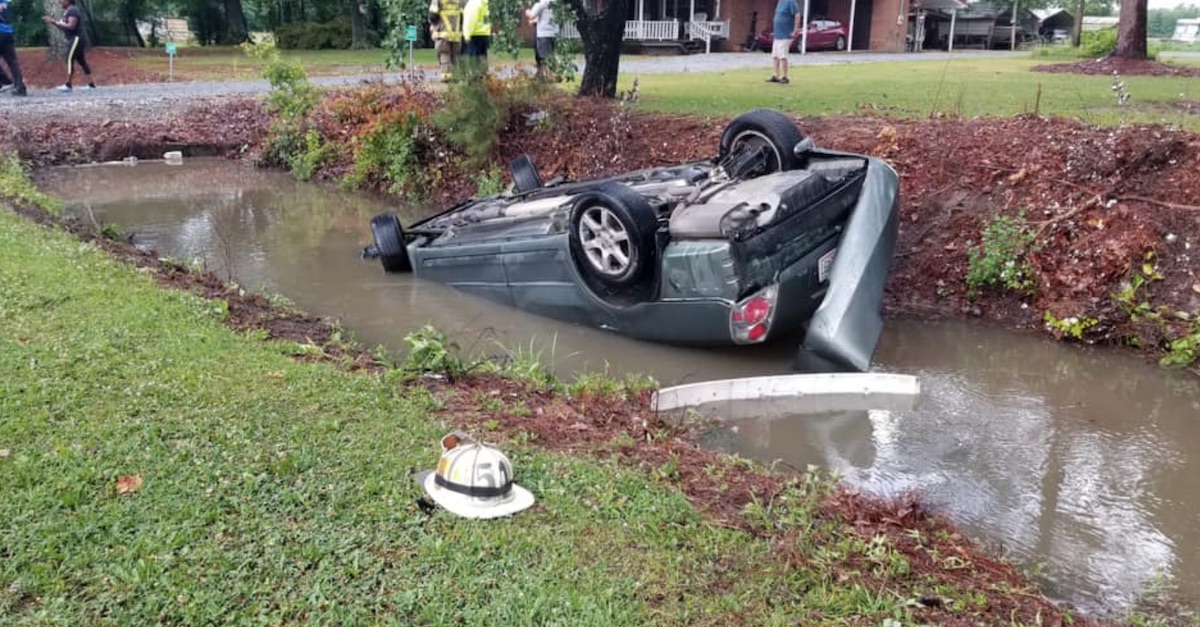 Two police officers in Greenville, North Carolina were on their way to work on the morning of June 3 when they spotted something on the side of the road that they couldn’t ignore: an upside-down car in a ditch with its windows underwater. Police say there’s no doubt that Officer Justin Lavin and Officer Christopher Santiago’s actions saved the woman who was trapped inside.

According to the Greenville Police Department, the plainclothes officers spotted the wreck around 8:30 a.m. on June 3, pulled over and then smashed a window of the overturned vehicle to extricate the woman.

“Without hesitation, the officers quickly and selflessly jumped into action, breaking a window to the vehicle so they could gain access. Officer Lavin was able to enter the car and free the driver from her seatbelt,” Greenville Police Department said in a Facebook post about the dramatic rescue. “the Officer Santiago had the presence of mind to hold a firm grip on Officer Lavin’s belt in the event the car would slip further into the water. As Officer Santiago pulled Officer Lavin, Officer Lavin pulled the driver and their joint efforts freed the woman from the car — undoubtedly saving her life.”

Authorities said the officers will be formally recognized for their “selfless act of service,” though it’s not clear at this time when that ceremony will take place. Further details about the incident were not released, but the rescue effort as described by police was not without risk.

In two recent cases, officers lost their lives trying to save people who were drowning.

Officer Enmanuel “Manny” Familia of the Worcester Police Department in Massachusetts, a 38-year-old husband and father of two, died on June 4 trying to save 14-year-old Troy Love from the waters of Green Hill Pond. Tragically, both of them drowned.

On June 6, just two days after Familia’s death, Baldwin County Sheriff’s Deputy William “Bill” Smith died at 57 in Alabama to save a swimmer from drowning near Fort Morgan. Smith, also a husband and father of two, dove into the Gulf of Mexico waters with a fellow deputy. Smith saved the swimmer in distress, but lost his own life. The sheriff’s office later confirmed that Smith drowned.

Smith’s funeral is scheduled for Saturday.