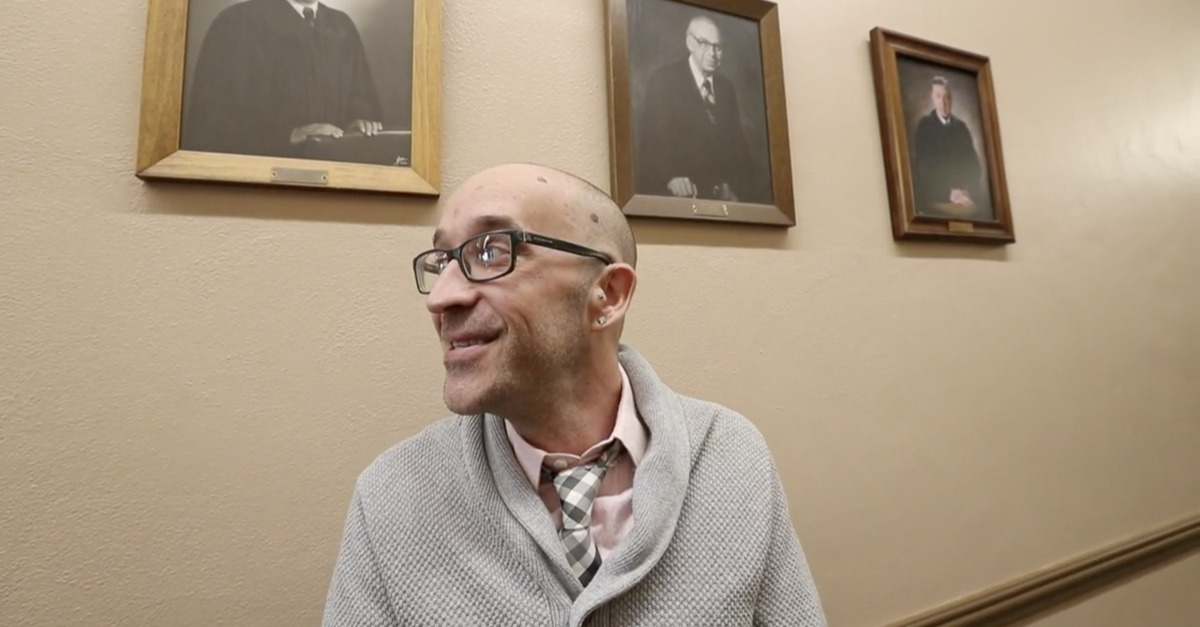 Tyson Timbs smiles outside of court.

The Indiana Supreme Court on Thursday issued a blistering ruling that allowed a man to keep his Land Rover in a case about excessive fines and the limits of civil asset forfeiture.

The facts are fairly straightforward but the controversy, in a legal sense, has been twisted and contorted over the course of nearly eight years due to the government’s keen insistence on taking Tyson Timbs’s vehicle away from him and claiming it as their own.

In 2013, the State of Indiana filed a civil forfeiture complaint on the suspicion that Timbs had been using his Land Rover for drug dealing.

In sum, Timbs sold police $385 worth of heroin before he was arrested and charged with three low-level felonies. He ultimately pleaded out to two of the offenses and sentenced to home release. At the same time, the state decided they were entitled to his car.

The trial court sided with Timbs and dismissed the state’s request by finding that seizing his car such penny ante offenses was “grossly disproportionate” to his admitted illegal conduct and would therefore violate the Eighth Amendment’s Excessive Fines Clause.

But the state really wanted to get their hands on Timbs’s ride.

They appealed. They lost at the appellate level.

They appealed again. The Indiana Supreme ruled for the Indiana Attorney General on the exceptionally narrow grounds that the Excessive Fines Clause had not yet been incorporated against the states.

Incorporation is a quirk of U.S. law whereby Amendments to the U.S. Constitution became valid points of law as applied to the several states. What this means in real terms is that, until the Supreme Court decides in favor of incorporating any given aspect of any given constitutional amendment, those protections actually do not have much of any legal import beyond the District of Columbia.

In other words, Timbs originally lost–but only on a technicality and not on the merits of his arguments about the clause in question or its relationship to the actual facts of his conviction.

Timbs appealed next. This time all the way to the U.S. Supreme Court. He won and secured incorporation of the Excessive Fines Clause against the state for, perhaps, the rest of U.S. history. But the nine justices remanded the case instead of deciding it entirely in his favor–sending it back to the Indiana Supreme Court.

The judges sitting atop the Hoosier State’s highest court then did some remanding of their own–sending the case back to the trial court and directing the judge that originally ruled in Timbs’s favor to consider whether or not seizing the Land Rover for low-level offenses was “grossly disproportional to the gravity of the offense and the claimant’s culpability for the property’s misuse.”

The trial court again ruled in Timbs’s favor–issuing 14 pages of findings and finding that he had, in fact, proved the state’s request was grossly disproportional to the minor drug offenses at issue.

But the state insisted on having Timbs’ automobile and filed a direct appeal due to the constitutional invalidation here.

Chief Justice Loretta Rush, perhaps a bit impatient by now with the crusade waged against Timbs by three state attorneys general, did not mince words in ruling for the man who just wanted his truck back.

“We chronicle and confront, for the third time, the State’s quest to forfeit Tyson Timbs’s now-famous white Land Rover,” the opinion begins. “And, again, the same overarching question looms: would the forfeiture be constitutional?”

A direct reference to one of America’s greatest novelists, Herman Melville, takes center stage in the opinion.

“Reminiscent of Captain Ahab’s chase of the white whale Moby Dick, this case has wound its way from the trial court all the way to the United States Supreme Court and back again,” Rush continues. “During the voyage, several points have come to light. First, the vehicle’s forfeiture, due to its punitive nature, is subject to the Eighth Amendment’s protection against excessive fines. Next, to stay within the limits of the Excessive Fines Clause, the forfeiture of Timbs’s vehicle must meet two requirements: instrumentality and proportionality. And, finally, the forfeiture falls within the instrumentality limit because the vehicle was the actual means by which Timbs committed the underlying drug offense.”

Taking stock of the tortured and lengthy procedural posture of the case over the years, the court easily found in favor of Timbs:

But, until now, the proportionality inquiry remained unresolved—that is, was the harshness of the Land Rover’s forfeiture grossly disproportionate to the gravity of Timbs’s dealing crime and his culpability for the vehicle’s misuse? The State not only urges us to answer that question in the negative, but it also requests that we wholly abandon the proportionality framework from State v. Timbs. Today, we reject the State’s request to overturn precedent, as there is no compelling reason to deviate from stare decisis and the law of the case; and we conclude that Timbs met his burden to show gross disproportionality, rendering the Land Rover’s forfeiture unconstitutional.

“After considering the major proportionality considerations—that is, the harshness of the punishment, the severity of the offense, and the claimant’s culpability—the trial court determined that Timbs had shown gross disproportionality,” the majority notes. “Our independent weighing of the considerations yields the same result.”

Notably, the truck was returned to Timbs in May 2020 by the state on the order of the judge in Grant County–but the state pursued the case anyway in order to test their constitutional mettle. Thursday’s ruling proved the limits of that approach or, rather, the limits of their legal theory.

Justice Mark Massa, writing alone in dissent, took great issue with the majority opinion’s conclusion that “the severity of the underlying dealing offense was minimal.”

“I am skeptical that dealing in heroin can ever be a crime of minimal severity,” the brief dissent muses. “No narcotic has left a larger scar on our state and region in recent years, whether overly prescribed or purchased illicitly on the street.”

Massa was also none-too-fond of the literary reference.

“Nor can I join the opinion’s characterization of the tenacity of three different elected attorneys general as being akin to Ahab’s monomaniacal pursuit of Moby Dick,” the justice complains. “The analogy is emotive and appealing but takes no notice of the State’s motivation to vindicate a larger constitutional principle.”

In the end, a constitutional principle was vindicated the exact opposite way.