‘This Will Be a Turning Point in Our Nation’: ‘Relationship Strategist’ Nabbed by Feds Due to Celebratory Twitter Posts About Jan. 6 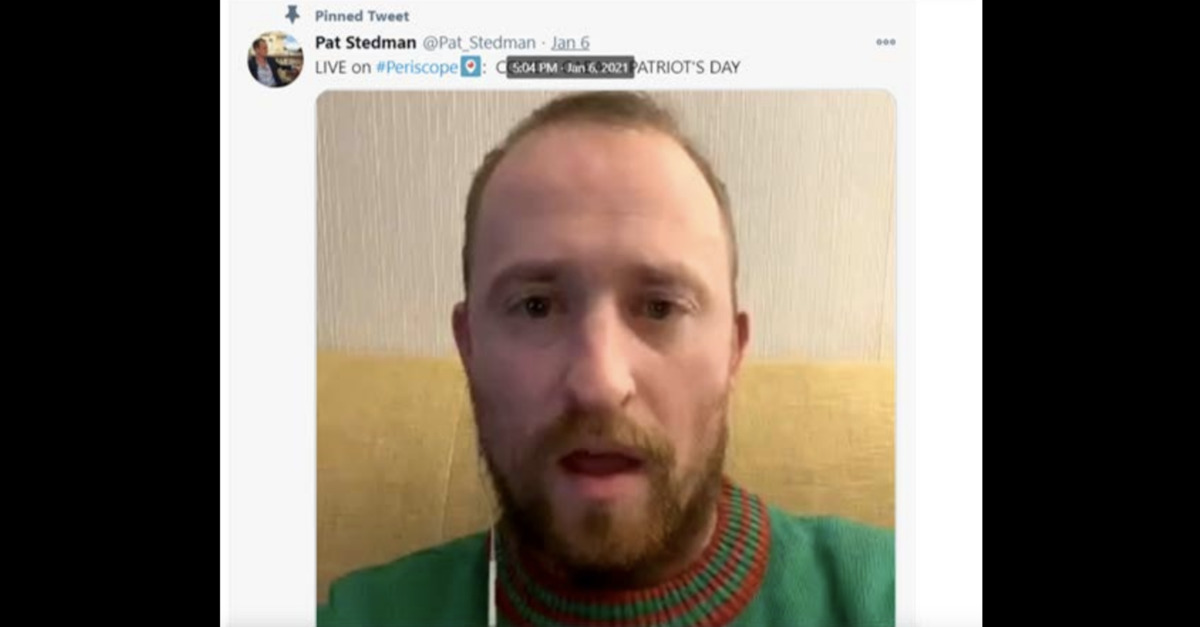 Federal prosecutors charged a self-described “dating and relationship strategist” over his alleged participation in the Jan. 6 attack on the U.S. Capitol Complex. Court documents unsealed on March 13 show the FBI was particularly interested in Twitter data.

According to an affidavit in support of a criminal complaint and search warrant, 32-year-old Patrick Stedman “self identifies as a dating and relationship strategist on his Twitter page, under display name Pat Stedman, username @Pat_Stedman,” and “is a frequent Twitter user” with nearly 26,000 followers as of earlier this year.

The filing accounts for some of Stedman’s Twitter activity:

In addition to relationship strategy advice, STEDMAN posts and comments regularly on political topics. STEDMAN posts a “live stream video” called “COVID/CABAL” on his Twitter account in which he addresses a wide variety of topics.

According to the FBI, Stedman’s Twitter use implicated him both directly and indirectly in the abortive pro-Trump insurrection.

“Highly, HIGHLY recommend all patriots come to DC on the 6th,” a Dec. 2020 Twitter post begins. “This will be a turning point in our nation. Will eventually be a national holiday akin to the 4th of July. You will want to tell your grandchildren you were there.”

A followup tweet in the same thread and from the same account reads: “If you are coming DM me. Assembling a TEAM.”

“Follow @drtigerjoseph for feed of DC,” a post from @Pat_Stedman on Jan. 5 reads. “Incredible energy. Heading down myself tonight. See you there!”

Then came the day in question.

According to the FBI, Stedman posted several tweets containing images, videos and narration of what appears to be happening inside the U.S. Capitol.

“I can tell you having been in the Capitol these videos the MSM (mainstream media) is showing of fights between cops and protestors are unlike any of the dynamics I saw,” the defendant allegedly tweeted. “Does this look like a ‘tense’ scene to you?” 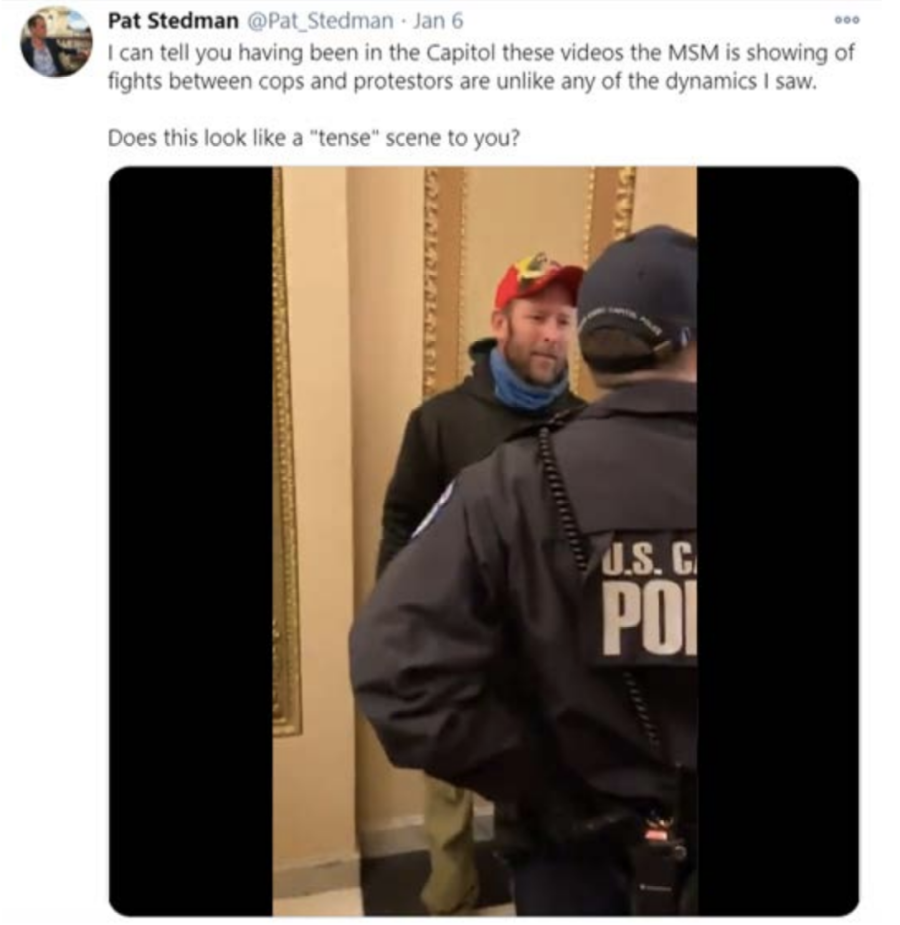 In another post, Stedman allegedly posted about, “[s]hots fired, guns drawn by guards.”

The FBI additionally claims that Stedman himself opened up about his experiences inside the seat of legislative government on that fateful day in a video posted to Twitter titled “COVID / CABAL – PATRIOT’S DAY” during which he allegedly “discussed the details of his presence inside the U.S. Capitol, including sitting in Speaker of the House of Representatives Nancy Pelosi’s office.”

Federal investigators knew to look at Stedman’s alleged Twitter account because of two witnesses who claim to have known the defendant since college and high school, respectively.

The affidavit notes, at length:

Witness 1 submitted a tip to the FBI’s online tip portal on or about January 7, 2021. According to Witness 1, STEDMAN posted a video to his Twitter account @Pat_Stedman at 3:52 pm on January 6, 2021 where he discussed his participation in the riots: “I was pretty much in the first wave, and we broke down the doors and climbed up the back part of the Capitol building and got all the way into the chambers.”

Witness 1, a college classmate of STEDMAN, was interviewed by the FBI on January 19, 2021 and was “one hundred percent confident” the individual posting on @Pat_Stedman on Twitter was identical to the Patrick STEDMAN that he has known since college.

Witness 2 submitted a tip to the FBI’s online tip portal on or about January 8, 2021 about STEDMAN posting a video to his Twitter account @Pat_Stedman “storming the Capital, then bragging about if after.” Witness 2 claimed STEDMAN had been “encouraging his tens of thousands of fans to join him in DC for weeks.”

Witness 2, a high school classmate of STEDMAN, was interviewed by the FBI on January 19, 2021 and was “one hundred percent sure” the individual posting on @Pat_Stedman on Twitter was identical to the Patrick STEDMAN that he has known since high school.

Prosecutors filed two relatively minor charges against Stedman in late January after identifying him by way of “New York and New Jersey Department of MotorVehicles (DMV), a 2017 application with the New York State Liquor Authority, as well as speaking appearances in YouTube videos,” according to the affidavit.

He was arrested on Jan. 21 and was released on a personal recognizance bond six days later.

If convicted as charged, he faces a statutory maximum of three years in prison and/or fines.

Read the affidavit in full below: