Texas Man Who Broke Speaker’s Lobby Doors Told His Wife to ‘Get Rid of His Trump Things’ After Capitol Invasion: Prosecutors 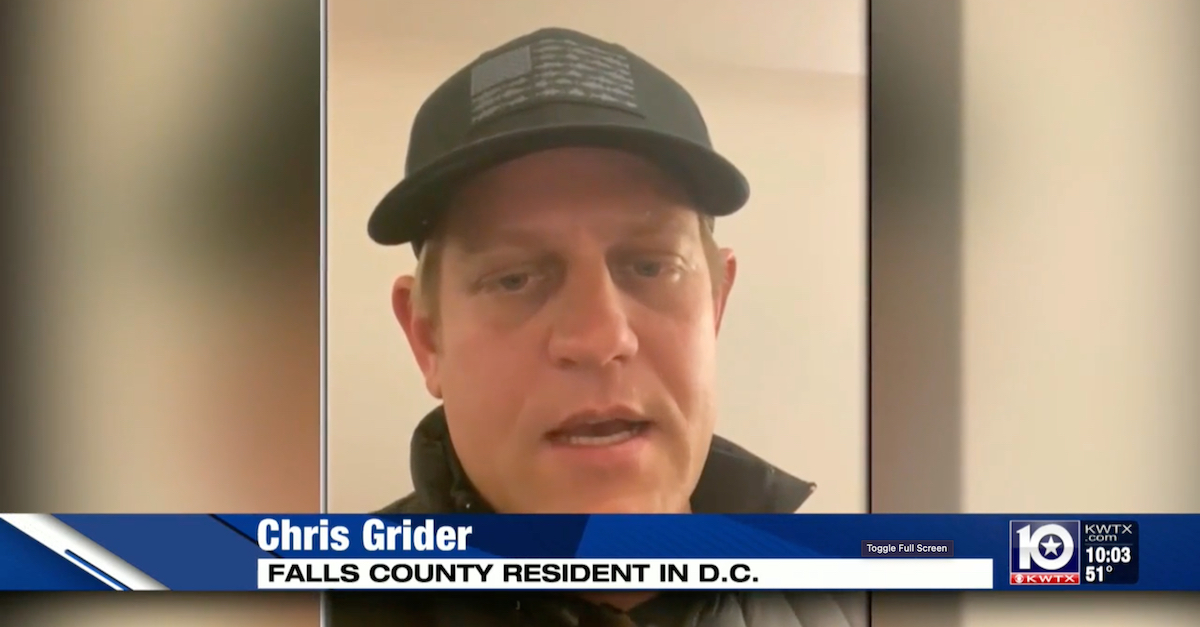 A defendant indicted on seven counts for his alleged role in the siege on the U.S. Capitol Complex on Jan. 6th told his wife to “get rid of his Trump things” after federal prosecutors contacted him, new court documents reveal.

Christopher Ray Grider is accused of “personally push[ing] and kick[ing]” the doors to the Speaker’s Lobby and of “suppl[ying] the helmet used to break glass in the doors leading into the Speaker’s Lobby” shortly before Ashli Babbitt was shot and killed by a Capitol police officer trying to enter through those same doors, prosecutors say.

Grider’s attorneys have asked a federal judge in Washington, D.C., to revoke a detention order previously issued against Grider. A different judge in the Western District of Texas ordered Grider to remain incarcerated pending trial because, as that judge reasoned, “[h]ad Mr. Grider succeeded in his alleged attempts to breach the entrance leading to the House Chamber, the tragedy could have been far greater.”

Among the government’s evidence against Grider is an interview he conducted with a Waco, Texas television station on Jan. 6th. Grider described being “within several feet” of Babbitt. He said his fellow protesters “were shocked . . . when the people on the other side of the door, from 20 feet away, shot her in the chest. At that point we were all panicked, we couldn’t leave because there were thousands of people behind us pushing us forward.”

“The president asked people to come and show their support,” Grider also told the station. “I feel like it’s the least that we can do, it’s kind of why I came from central Texas all the way to DC.”  (Grider has since apparently walked back his support for Trump; he has claimed through his attorneys he no longer cares “about the politics of who is president.”)

Prosecutors submitted those quotes as part of their paperwork in hopes of keeping Grider locked up.

What follows in the document is a series of photos which prosecutors say show Grider among a “raucous crowd” at the Capitol. Grider “appeared to be among the first people to heed the call” to head toward the Speaker’s Lobby, prosecutors say, “and he was seen racing down the hallway.” A number of videos, including images from the defendant’s own phone, indicate that Grider was among the first to arrive at the location where Babbitt was shot and lay dying on the floor.

Other images show Grider with the helmet prosecutors say the crowd used to break glass at the location.

The Speaker’s Lobby area soon became packed with a crowd. The defendant continued to stand near the front of the crowd by the glass-paned doors leading to the Speaker’s Lobby, and remained near the front until seconds before Babbitt’s shooting. Members of the crowd were shouting and gesticulating at the officers. A young male wearing a fur-lined hat was observed repeatedly punching the glass panels of the doors immediately behind the officers with his fists, causing the glass to splinter. While throwing two of the punches, that male pushed his body up against one of the Capitol Police officers guarding the door. That male was also observed shouting and pointing aggressively at the officers. Grider was then observed handing a black helmet to the male and speaking to him. The defendant appeared to knock on the top of the helmet, signifying that it was a hard instrument, and the young male accepted it. Additional officers in riot gear arrived behind the crowd at the Speaker’s Lobby doors, and the three officers guarding the door appeared to move to the adjacent wall.

Seconds after the officers stepped away from the doorway, the defendant moved in and attempted to push open the doors and appeared to kick the doors in an attempt to breach the doorway. The young male with the fur lined hat proceeded to use the defendant’s helmet to violently and repeatedly strike the glass-paned doors in the center and far-right hand side, further shattering the glass. Another individual rammed the glass repeatedly with a flagpole. Chants could be heard of “Break it down!” and “Let’s fucking go!”

After Babbitt was shot, prosecutors say Grider leaned over a railing “to get a better glimpse of Babbitt bleeding on the floor.”

“The defendant was holding his phone over the stairway appearing to capture a video or pictures of Babbitt,” they wrote.

After the events at the Capitol and after the defendant’s subsequent local television interview, prosecutors tacitly suggested that Grider asked his wife to help hide evidence that could connect him with what occurred. Here’s the government’s narrative:

Grider was charged Jan. 20 and was placed under arrest (the defense says he surrendered himself) on Jan. 21. He was indicted Jan. 26.

According to court papers filed by the defense, Grider “is self-employed as a winemaker who owns a vineyard and vineyard store.” He served in the National Guard and in the Air Force; he also worked as a teacher and as a security guard.

“Mr. Grider submitted letters from twenty-two (22) individuals including family members, the pastor of his church, parishioners of his church, neighbors, employees of his winery, fellow business owners in the community, and friends of many years, all who attested that Mr. Grider was a loving and caring individual and was, in no way, a danger to the community or others,” the defense wrote.

Grider’s “presence in the Capitol was not one of a person who intended to inflict harm on anyone or commit any violent acts,” the defense said elsewhere. “He wanted his voice to be heard and nothing more.”

Prosecutors are asking a judge in Washington, D.C. to keep Grider locked up pending trial. Read their full arguments below:

US v GRIDGER (Get Rid of Tr… by Law&Crime

[image via screen capture from KWTX-TV]