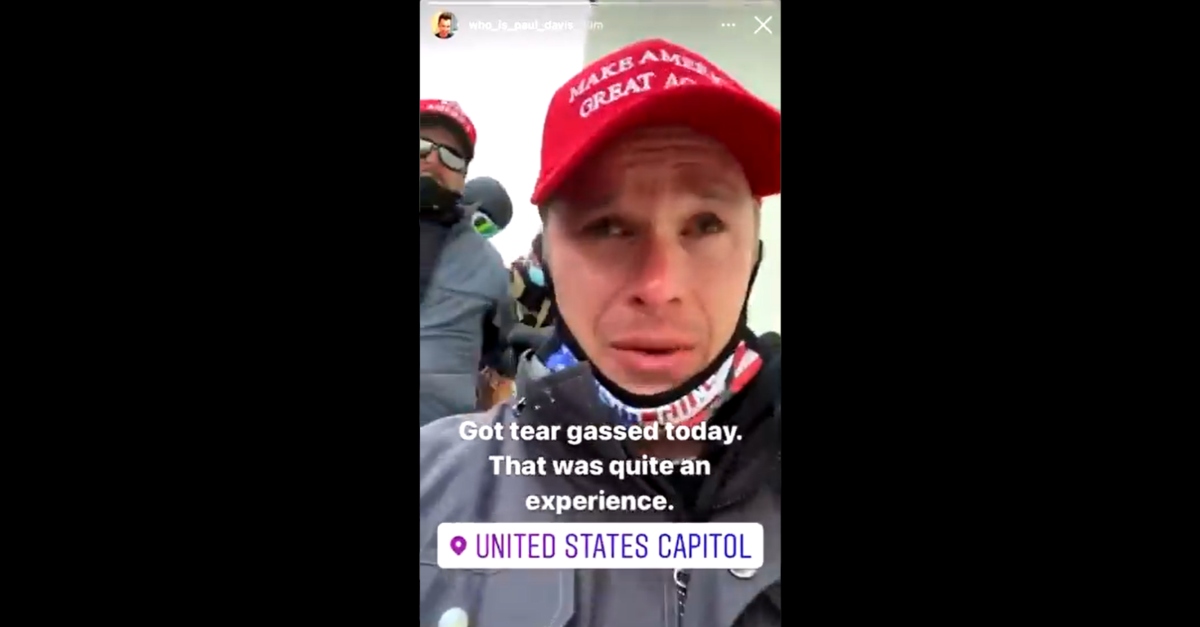 A Texas lawyer who was fired from his job after posting videos of himself at the U.S. Capitol on Jan. 6 filed a lawsuit on Monday declaring that the “entire 117th Congress is illegitimate” and, therefore, Donald Trump’s impeachment is “null and void.” He purported to bolster that argument by saying his case was not a Sidney Powell, Lin Wood or Rudy Giuliani lawsuit.

No, this is a Paul Davis lawsuit.

Recall: Davis was fired by Goosehead Insurance the day after he placed himself at the scene of the storming of the U.S. Capitol.

If you didn’t know that already, have no fear: Davis mentioned it in his signature block.

“Terminated after peacefully protesting,” he said in parentheses after writing that he is no longer Associate General Counsel of Goosehead Insurance.

In the video Davis posted, he said he was trying to get public officials to “audit” the vote of the 2020 presidential election. He said he was tear-gassed by police, but claimed he didn’t actually “storm” the Capitol.

“We’re all trying to get into the Capitol to stop this,” he said. “And this is what’s happening. They’re tear-gassing us, and this is not acceptable–not acceptable. People are not going to stand for this.”

“For those of you claiming I was trying to ‘storm the Capitol,’ it’s obvious from my entire story that I was peacefully demonstrating,” he wrote. “They gassed the entire crowd that was standing there with me. I was not trying to break in. Was just talking to the police officers and praying over them.”

In a follow-up post, he said he did not intend anything violent by saying they were “trying to get into the capitol,” but that he was discussing a protest.

“The Twitter video is out of context, just like they do to all conservative patriots,” he said.

Davis, who is representing Latinos for Trump, Blacks for Trump, and Joshua Macias, claimed that his lawsuit will be taken out of context by the media in the same way. Davis, preemptively blaming the media for rejecting the idea the 2020 election and the entire Congress is illegitimate, asserts that his lawsuit isn’t trying to destroy democracy but to save it:

Accordingly, this Court should rest assured that the relief requested in this lawsuit will not result in the destruction of democracy, as the dishonest national news media, who has been complicit in this crisis and as will be shown in the course of this lawsuit, will attempt to claim. No, it is actually the exact opposite. The purpose of this lawsuit is merely to enforce the laws and Constitution of the Republic to SAVE AND RESTORE the democratic republican process on which the People have depended to protect their individual rights since the dawn of our Republic.

But wait there’s more. To hear Davis tell it, because “every member” of the “currently-seated” Congress is “illegitimate,” Trump’s second impeachment (“for inciting an insurrection“) is “null and void”:

The truth of the allegations set forth herein compels the shocking conclusion that every member of currently-seated 117th U.S. Congress and the President-Elect, who is scheduled to be sworn in this coming Wednesday, January 20th, were not legitimately elected because the People of the United States were given ballots that were patently illegal under federal law, namely HAVA. Therefore, the entire 117th Congress is illegitimate and all actions taken since January 3, 2021, including the counting of the Electoral College votes and confirmation of Joseph Biden as President-Elect and the impeachment of President Donald J. Trump are null and void.

The suit, filed in the U.S. District Court for the Western District of Texas, names as defendants: Pete Sessions, Nancy Pelosi, Mitch McConnell, Mark Zuckerberg, Chuck Schumer, Brad Raffensperger, “all current so-called members of the 117th Congress of the United States,” and “all the state governors and secretaries of state.”

The lawsuit is asking a federal judge to grant an injunction “forever restraining Defendants from participating in any action relating to the process of electing public officials, holding public office or any official government position, or position in any partisan enterprise related to American politics, and from defaming or threatening or otherwise interfering with the life, liberty, or property of Plaintiffs.”

This will not happen.