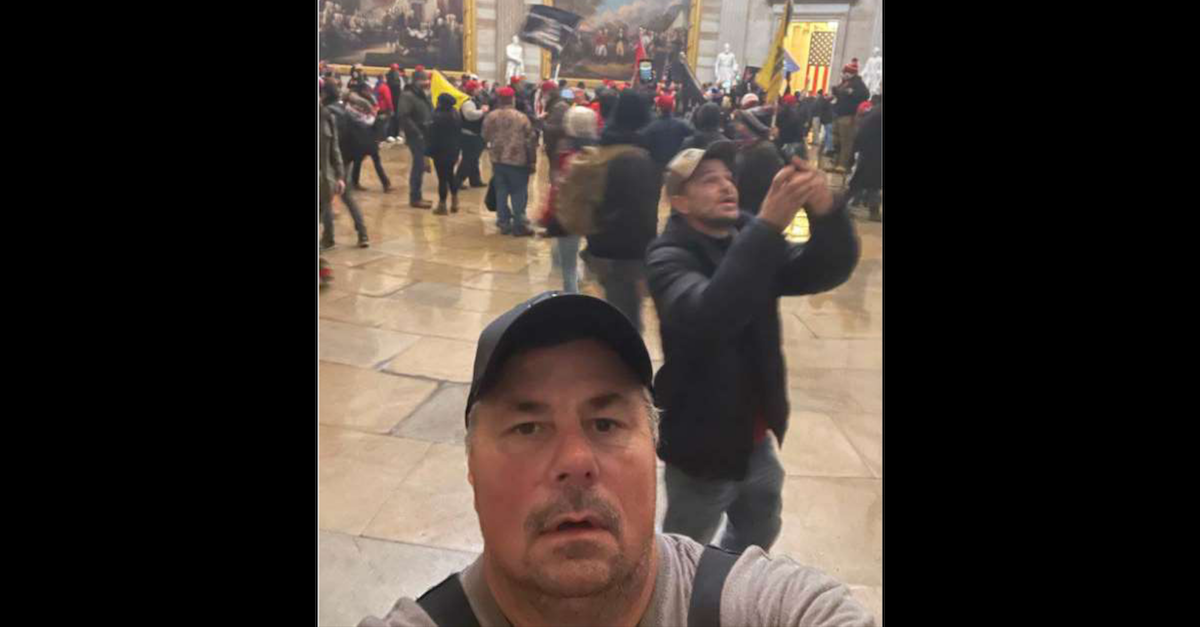 Retired New York City firefighter Thomas Fee surrendered to authorities on Tuesday morning, one day after court papers showed him boasting about being at the “tip of the spear” of a mob shouting “Pelosi” and “tyranny” in the U.S. Capitol Rotunda, a law enforcement source said.

His charges are supported by video, a message he posted on a girlfriend’s Facebook account, and a tip from that girlfriend’s sibling to federal authorities, court papers say.

“The video shows numerous persons inside the Rotunda of the U.S. Capitol who do not appear to have authorization to be present,” Joint Terrorism Task Force officer Gerald Sheridan wrote in an affidavit supporting the charges against Fee. “In the video, members of the crowd are heard yelling the word ‘tyranny’ and the name ‘Pelosi,’ which your affiant understands to be a reference to the Speaker of the House of Representatives Nancy Pelosi.”

Dozens of law enforcement and military members have been charged in connection with the U.S. Capitol insurrection, including members of multiple fire departments. Ex-firefighter Robert Sanford, a 55-year-old from Pennsylvania, has been accused of throwing an extinguisher at police, which ricocheted and hit three heads.

An FDNY spokesperson announced last week that the department is cooperating with federal authorities about the activities of multiple current or former firefighters.

“The Department received anonymous allegations that active or retired members were present at the events at the United States Capitol on January 6 and, as required, has provided that information to the FBI,” the spokesperson, who did not provide a name, told Law&Crime in an email.

Fire Commissioner Daniel Nigro scolded his firefighters about the riots on Jan. 13.

“The Department respects the right of all members to take and personally support social and political positions,” Nigro told them in a message. “While exercising those rights, members must act with the utmost discretion and respect for others, and ensure that their conduct is in compliance with all applicable laws. Conduct that crosses the line into violence or threats against others or property, or otherwise violates any local, state or federal laws, will be referred to the relevant law enforcement authorities.”

“Department members, whether active or retired, must not engage in conduct that tends to bring the Department into disrepute, or is disruptive to the discipline and good order of the Department,” Nigro added. “Past and present Department employees are obligated to dutifully represent the values of the FDNY – honor, service, bravery, safety, equity, readiness and dedication – regardless of when we served or wherever we are. The Department relies upon the unqualified trust of each other and members of the public that we serve to effectively fulfill our mission. Conducting ourselves with dignity and respect, and in full compliance with the law, is critical to maintaining trust and accomplishing our mission.”

Fee’s arrest raises questions about what the department has been doing to enforce those values.

In 2004, the New York Post reported that Fee was suspended for “repeatedly taunting a black doctor with racial invective.”

“The unidentified doctor complained about the jeers to Fee’s captain and Fee was suspended, said Hempstead Fire Chief George Sanders, who heads a village force of approximately 150 volunteers who work at six different sites within the racially diverse village.”

FDNY confirmed that Fee is the same individual who was suspended, but he remained on the force more than a decade and a half longer. The department did not answer a request for Fee’s disciplinary record by press time.

He is expected to have his initial court appearance later on Tuesday.

(Photo courtesy of the Department of Justice)