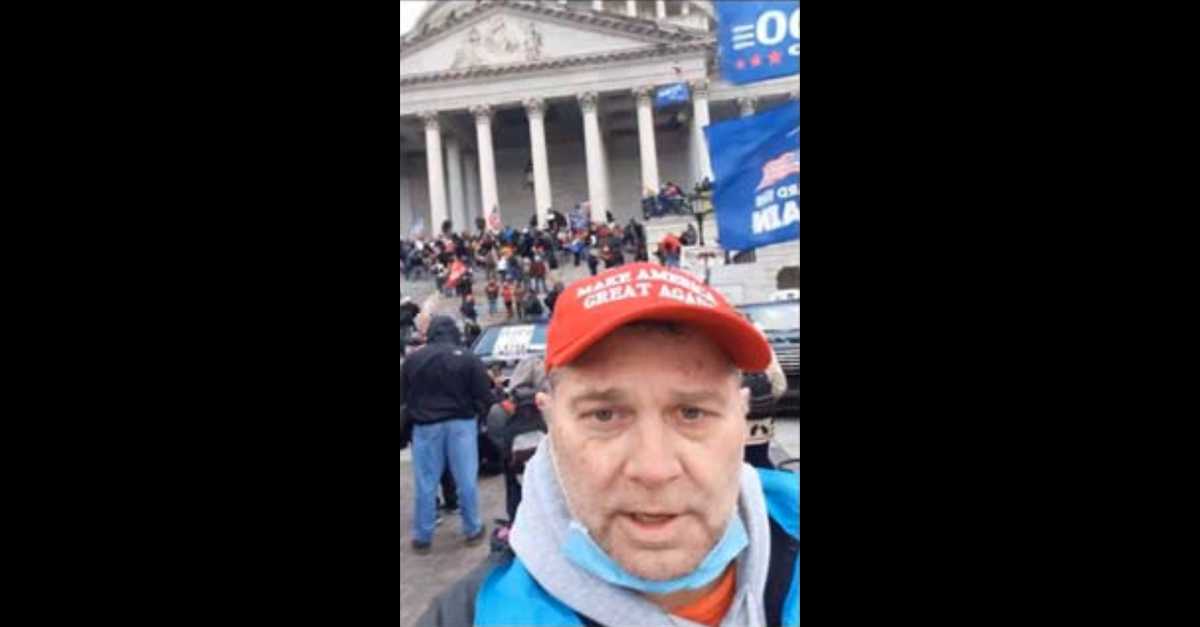 A Wednesday afternoon sentencing hearing kicked off 15 minutes late and came to an abrupt halt after federal prosecutors revealed they suddenly obtained new evidence against the man who was about to learn his fate in connection with the Jan. 6th siege at the U.S. Capitol Complex.

Robert Maurice Reeder, 55, of Maryland, cast himself as something of a tourist who happened to stumble across the goings-on in and around the capitol on Jan. 6th. Reeder, who has described himself as a “registered Democrat” of limited political passions, said he was watching television coverage of a pro-Trump crowd which had gathered for a speeches on the Ellipse when he made a spur-of-the-moment decision to hop a train into Washington, D.C., to join the event. After listening to the oratory on the Ellipse, he says he visited various area monuments before arriving at the U.S. Capitol and joining the “initially festive” events which by then were transpiring.

As Law&Crime previously noted, Reeder was charged with four counts loosely summarized as follows:  (1) knowingly entering or remaining in any restricted building or grounds without lawful authority to do; (2) disrupt the orderly conduct of Government business by engaging in disorderly or disruptive conduct; (3) uttering loud, threatening, or abusive language with the intent to impede, disrupt, or disturb Congress; and (4) parading, demonstrating, or picketing in any of the Capitol Buildings. He pleaded guilty to one of those counts — count four — and was due to be sentenced Wednesday.His attorney asked for probation only; the government asked for a two-month sentence. The maximum possible sentence for the admitted crime is a six-month sentence and a $5,000 fine, the government noted in a plea agreement.

As is customary in sentencing hearings, considerable jockeying occurred about whether the correct punishment was probation or the government’s recommendation of two months in jail. The defendant argued as follows:

Reeder objects to his being included in a crowd that is described as “a large crowd of individuals who gathered outside the US Capitol and ultimately forced entry inside the building. Those individuals’ actions included breaking windows and assaulting members of law enforcement as others in the crowd encouraged and assisted those acts to gain entry into the US Capitol.

Reeder’s conduct was individual and significantly and substantially different from many others in the “crowd.” He did not engage in “forced entry,” did not participate in “breaking windows and assaulting members of law enforcement” and was not one who “encouraged and assisted those acts to gain entry into the US Capitol.”

The government suggested on Wednesday that the defense attorney’s characterization of the defendant’s activities might be a lie.

In what was supposed to be a sentencing hearing, prosecutors said new video had been received as late as 10:40 a.m. on Wednesday — three hours and twenty minutes before the sentencing hearing was due to begin — which indicated Reeder may have attacked a police officer. That’s a significantly heightened charge over the previous accusations. Prosecutors noted that they were strongly considering moving the court to issue a full six-month sentence on the charge to which Reeder admitted guilt; that move jettisoned the government’s previous request for a two-month sentence.

A Statement of Offense indicated previously that Reeder recorded an assault on a police officer and told the police they needed to retreat, but it did not allege Reeder attacked an officer himself.

“We have seen now two video clips; we understand more are coming,” prosecutors said. “We want to get our hands around that.”

Reeder’s defense attorney said he suspected the video would actually help his client.

Senior Judge Thomas Francis Hogan said he was concerned that the defendant had been portrayed more as an “observer” than as a “participant.” He also noted that the timing was awkward.

“It’s unfortunate because we were ready to proceed today, but I understand the nature of this case,” Judge Hogan said.

Prosecutors asked for a 30-day continuance to afford them time to review the additional evidence, but the judge said his calendar would require a lengthier delay. A new hearing is now scheduled for Oct. 8 at 10:00 a.m. The judge said he also expected to see additional sentencing memorandums given the newly discovered evidence.

The original prosecution sentencing memorandum and a subsequent rebuttal characterized Reeder not “as a lost tourist” but rather as someone “proud to be a part of” the “entire riot” and who “recorded himself bragging about his exploits and the extent of violence and destruction.”

Reeder’s plea agreement affords the government some wiggle room to prosecute a so-called “crime of violence” not otherwise previously contemplated. The relevant language from the plea deal reads as follows:

It is unclear from Wednesday’s hearing whether prosecutors might seek to file any new charges against Reeder in addition to seeking a tougher sentence for the crime to which he already pleaded guilty.

Two other Capitol siege defendants pleaded guilty earlier this month to assaulting an officer. One, Scott Kevin Fairlamb, is recommended to serve a sentence of between four and five years, though the maximum sentence for the statute used to charge him carries a maximum of eight years in prison, a quarter-million-dollar fine, and three years of supervised release.