Oldest Known Jan. 6 Defendant, 81, Said He Had a Right as Taxpayer to Enter the Capitol. He Was Just Sentenced Following a Guilty Plea. 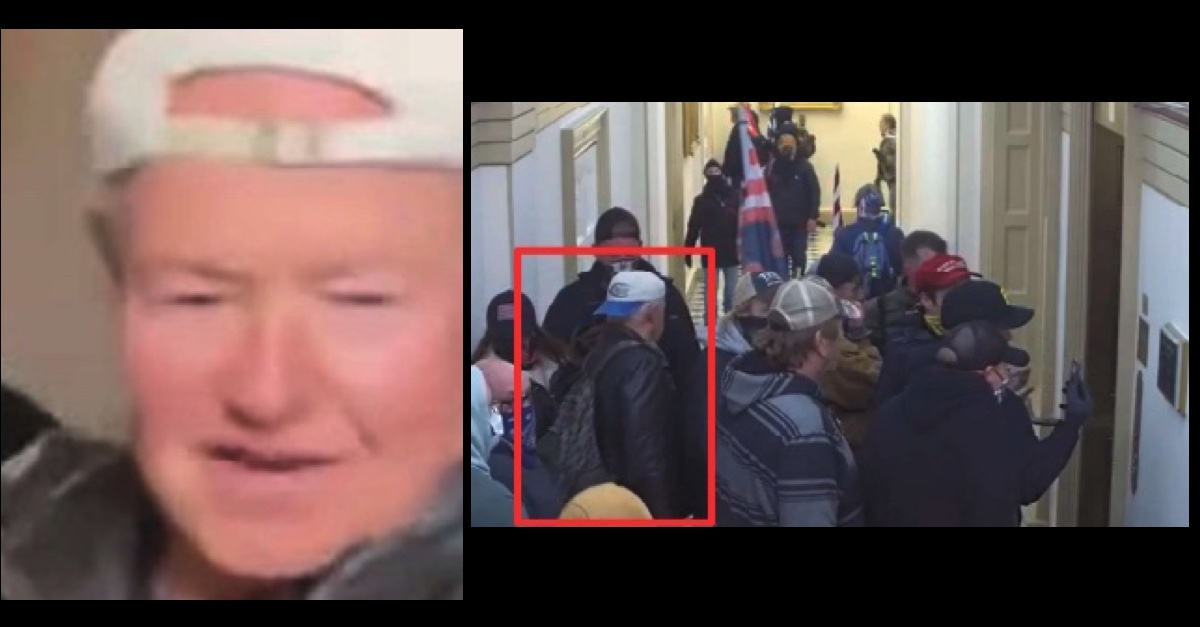 The oldest known defendant accused of storming the Capitol on Jan. 6 has been sentenced to home detention and probation after pleading guilty to a single misdemeanor.

Gary Wickersham, 81, was among the first people to reach the Capitol after a police line was breached, according to prosecutors. He entered the Senate Wing moments behind notorious “QAnon Shaman” Jacob Chansley, and at one point is seen on surveillance video in a crowded hallway outside the office of Maryland Rep. Steny Hoyer (D).

Wickersham was defiant when investigators interviewed him in January, according to prosecutors. He told them that he “believed that he was authorized to enter the Capitol because he pays his taxes,” the complaint says.

He said that many in the crowd that day were “members of Antifa,” and expressed a belief that “the entire event was staged, and that law enforcement purposefully did not have enough resources there so that supporters of the former president could overrun the Capitol and be subsequently labeled as ‘intruders,'” according to the government’s sentencing memorandum.

He pleaded guilty in October to a single charge of parading, demonstrating, or picketing in a Capitol building. He had also been charged with violent entry and disorderly conduct.

“This is the first defendant I’ve had who is older than me in quite some time,” Lamberth said shortly before hearing statements from the parties. Lamberth, a Ronald Reagan appointee, is three years younger than Wickersham.

Assistant U.S. Attorney Sean Murphy, who noted that the average age of Jan. 6 defendants is 39, said that Wickersham’s is a “very difficult case.”

Murphy said that Wickersham appears to have softened since his initial interview in January, when he “expressed very little remorse” for his actions, according to Murphy.

“The passage of time seems to have changed his tune on that,” Murphy said, but added that it was still important that Wickersham be punished.

Wickersham’s attorney said that his client made a “terrible decision” to go inside the Capitol, and it’s one that he “regrets, sincerely and deeply.”

“In many ways, that decision, and those 22 minutes, is now going to define an 81-year-old man’s life,” attorney Michael Noone said.

In arguing for a sentence of probation only, without home detention, Noone characterized Wickersham as a veteran and widower who “never had so much as a traffic ticket” and went to the Capitol that day out of boredom.

“I think frankly he went down there because he’s bored and has nothing else to do,” Noone said. “He’s living alone within a two-hour distance of Washington DC.”

Noone said that Wickersham’s wife of 51 years died in 2018 after battling Parkinson’s disease, and said that he should have the opportunity to travel to see his children and grandchildren, who live around 20 minutes away from his home in Pennsylvania.

“Limiting his ability to do that now in his golden years would have a very profound impact on Mr. Wickersham, an impact that is perhaps disproportionate compared to the impact on a younger man or younger woman,” Noone said.

Wickersham also spoke on his own behalf at Tuesday’s sentencing.

“I got off the bus [in Washington] and as I was walking by the Capitol, that was the last place in the world where I thought I’d be traipsing for 22 mins inside,” Wickersham said. “For my whole 81 years[,] that 22 minutes I spent in there, that was a dark blot on my life and I regret doing it.”

In the end, Lamberth decided that a degree of punishment beyond probation was appropriate. Wickersham will be allowed to travel for work, religious services, school, medical treatment, attorney visits, court appearances, and court-ordered obligations, Lamberth said.

Lamberth praised Wickersham for making the plea deal, and expressed a hope that it would encourage other Jan. 6 defendants to do the same.

“The Court has to encourage others to do what you have done in this case, and that’s what I want to do with this sentence today, and not discourage others from coming forward and doing what they can to set things straight with what happened that day,” Lamberth said.

Wickersham’s plea and sentence, Lamberth said, sends a message to other Jan. 6 defendants expecting to take their cases to trial that “the jig is up.”

“There are a lot of other people out there right now who think that some magic is going to happen,” Lamberth said. “When you see these tapes [of the Capitol riot], I don’t know what they’re going to try.”