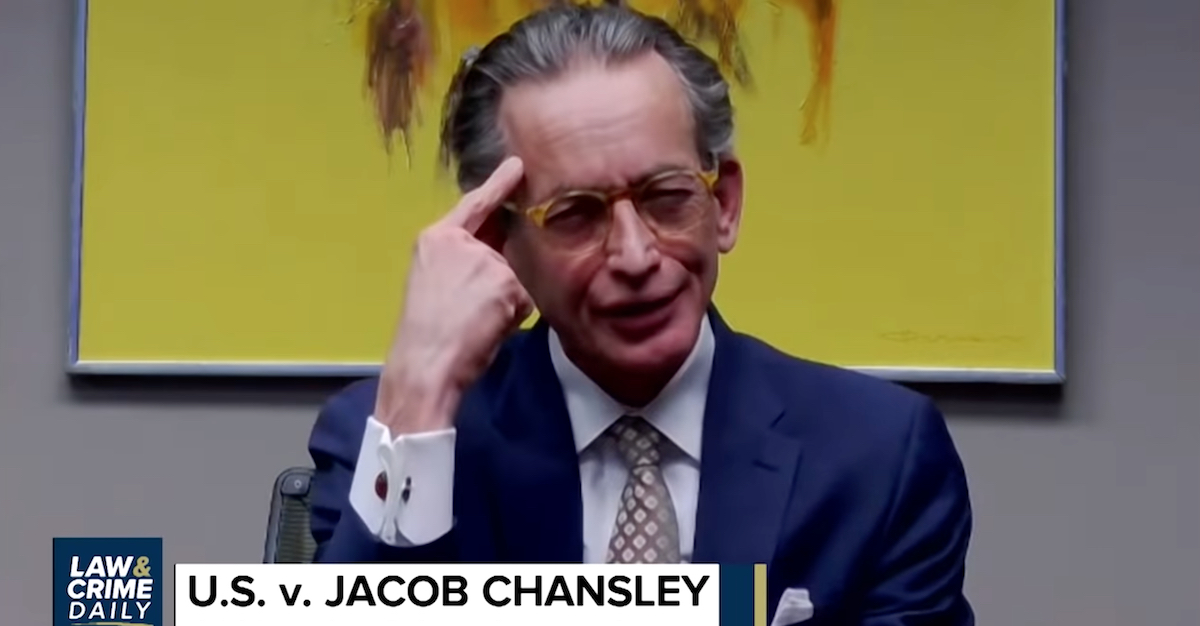 Speaking of his client, Watkins told St. Louis television station KSDK on Thursday that Chansley “regrets very, very much having not just been duped by the president, but by being in a position where he allowed that duping to put him in a position to make decisions he should not have made.”

He referred to Chansley as “the guy with the horns and the fur, the meditation and organic food.”

The comment about food was a reference to Chansley’s alleged hunger strike on account of being fed only non-organic food behind bars.

He said “months of lies” and “misrepresentations and horrific innuendo and hyperbolic speech” by Trump were “designed to inflame, enrage,” and “motivate” the mob on Jan. 6. “What’s really curious is the reality that our president, as a matter of public record, invited these individuals, as President, to walk down to the Capitol with him.”

Watkins told Law&Crime’s Angenette Levy that Trump — who was still in office at the time — should pardon his client. However, Watkins admitted that no one should be “holding [their] breath” waiting for such a pardon because Trump was unlikely to pardon “the guy with horns and a fur wrap.” (Other Trump supporters asked for and did not receive clemency.)

Watkins said his original request for a pardon from Trump was meant to address the “long-standing relationship” his client had with Trump — “in my client’s mind.” He said he reached out to White House Chief of Staff Mark Meadows to seek a pardon, which he said would have been the “honorable thing” for Trump to do after asking his followers to march to the Capitol on Jan. 6. 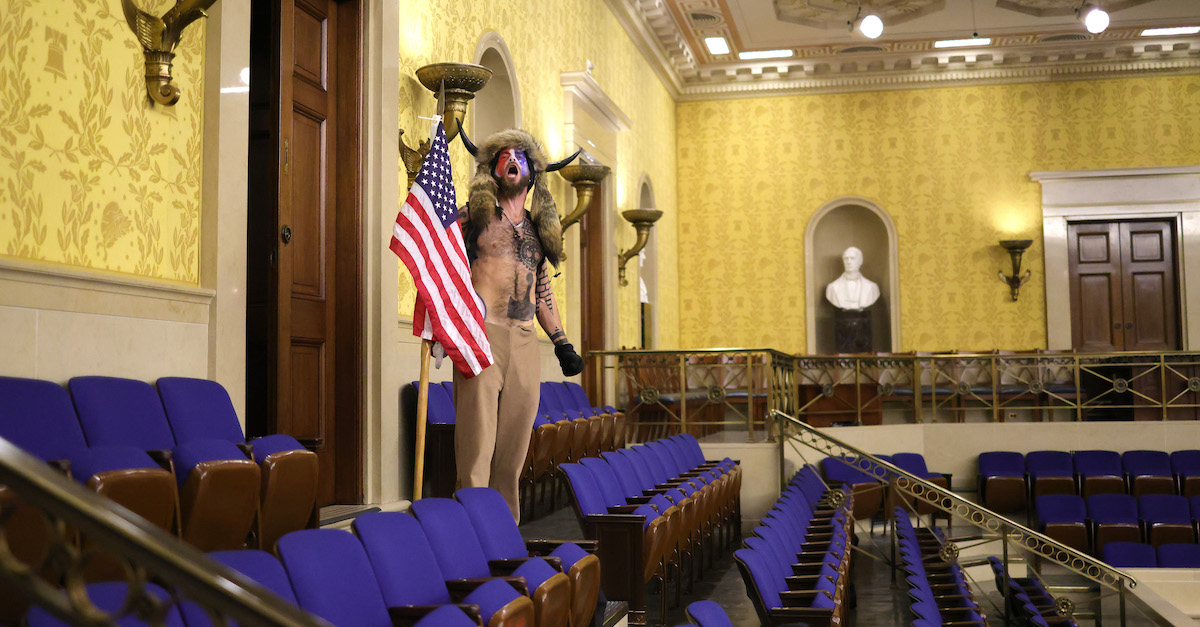 Jacob Chansley, the ‘QAnon Shaman,’ is seen inside the capitol on Jan. 6, 2021. (Photo by Win McNamee/Getty Images)

Trump told his supporters before the deadly events unfolded that “we’re going to walk down, and I’ll be there with you,” with reference made to the Capitol building immediately following those remarks.

“You’ll never take back our country with weakness,” Trump then added on Jan. 6. “You have to show strength, and you have to be strong.”

Levy suggested that Chansley made his own choice to enter the building.

Watkins said people need to “contextualize” Trump’s words according to the “heart and mind” of followers like his client.

“We’re talking about not — not just the guy with the horns and the hair, the tattoos and the bare chest — the Shaman — we’re talking about thousands of people. They felt — they heard — the message to them, from their president, was: ‘we’re going to walk down to the Capitol,'” Watkins said.

He admitted that Trump didn’t directly suggest violence, but that “hyperbole” and “innuendo” were used by Trump to get his followers to act.

Watkins likened the siege on the Capitol to a locker room talk given by a high school coach before a team races out onto a playing field.

“Our president is a very excellent motivator to those who are receiving his message,” Watkins said.

“They have an issue,” Watkins said of QAnon followers in general.

As to his client, Watkins told Levy, “you know what, maybe, just maybe, he doesn’t fall within the bell curve you and I would consider normal.”

Law&Crime Daily airs on the Law&Crime Network Monday through Friday at 5:00 p.m. and on select television stations nationwide.

[image of Watkins via the Law&Crime Network; image of Chansley via Win McNamee/Getty Images]