Feds Say They Arrested Proud Boys Organizer Who Was Recorded Saying ‘This Is Awesome!’ as Rioters Breached Capitol 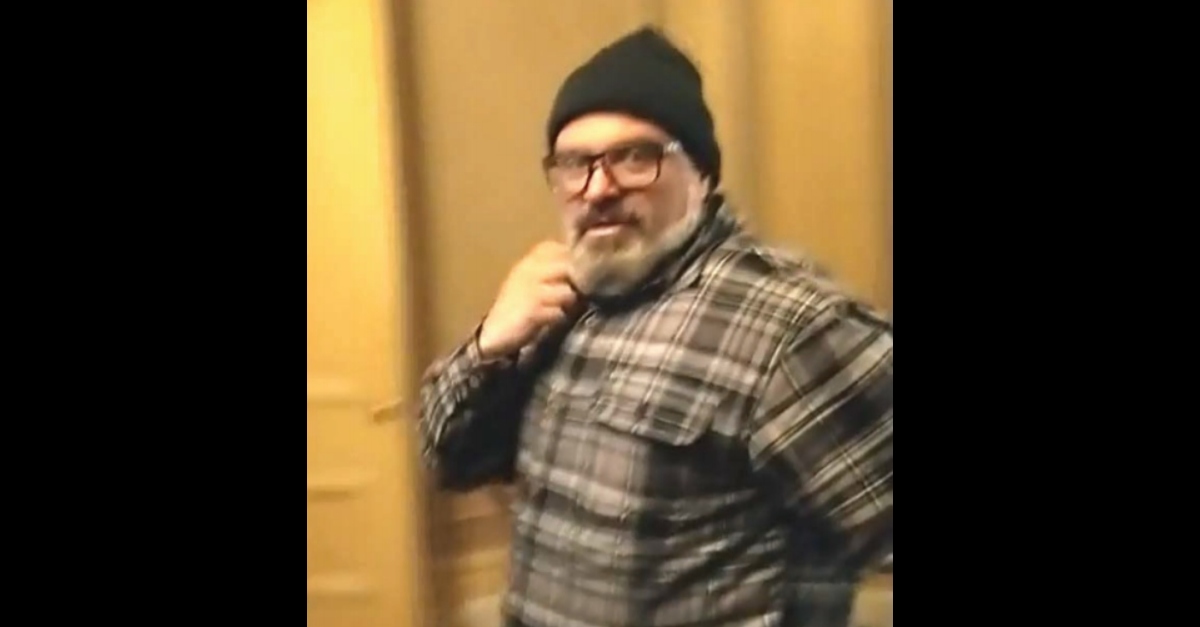 The FBI suggested this is Joseph Biggs.

Another Proud Boys member was arrested in the D.C. insurrection. Joseph Biggs was apprehended Wednesday in Florida, says the Department of Justice. They say he was identified on multiple videos around and inside the Capitol on Jan. 6.

“Hey, Biggs, what do you gotta say?” said an individual in a video cited by the Federal Bureau of Investigation. People were entering the Capitol Building, authorities said.

“This is awesome!” said the individual identified as Biggs.

Dominic Pezzola, a self-described member of the Proud Boys and a co-defendant in the insurrection, also makes an appearance in the affidavit. Authorities say that he, Biggs, and other members of the Proud Boys had communication devices on them during the incident. For example, investigators said Pezzola seemed to have an earpiece or something of the like. Biggs had a walkie-talkie style device on his chest, authorities said.

Supporters of then-President Donald Trump raided the Capitol Building on Jan. 6 after he continued to lie that he actually won the 2020 presidential election and that it was being stolen from him. Five people died: four Trump supporters, and Capitol police officer. The ex-POTUS did not pardon rioters on his way out of office, and now Joe Biden is president. 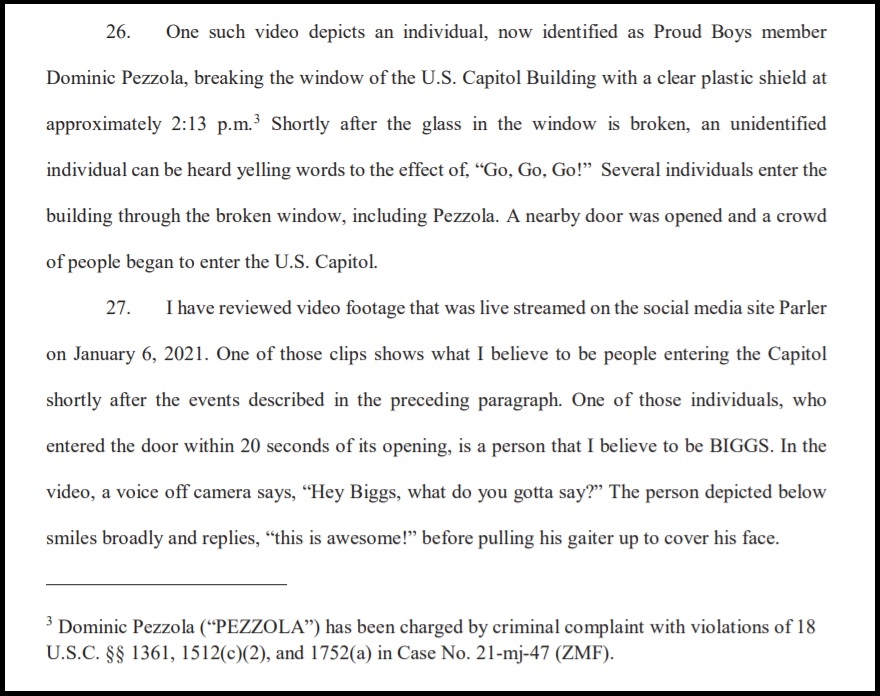 From the affidavit. The image referenced in the “this is awesome” detail can be seen at the top of the article.

Authorities described Biggs as a self-proclaimed organizer for the Proud Boys. Theirs is a self-styled “Western Chauvinist” nationalist gang with a lengthy history of brawling in the streets with left-wingers. The group has not taken kindly to being labeled a hate group.

Biggs’ name pops up in a complaint against Proud Boys leader Enrique Tarrio, who faces firearms charges in D.C.

“Proud of your f*cking boy, Enrique,” Biggs allegedly wrote in approval of Tarrio bragging about burning a Black Lives Matter banner of a historic Black church. (Tarrio is Cuban-American and is, in his own words, “pretty brown.”) 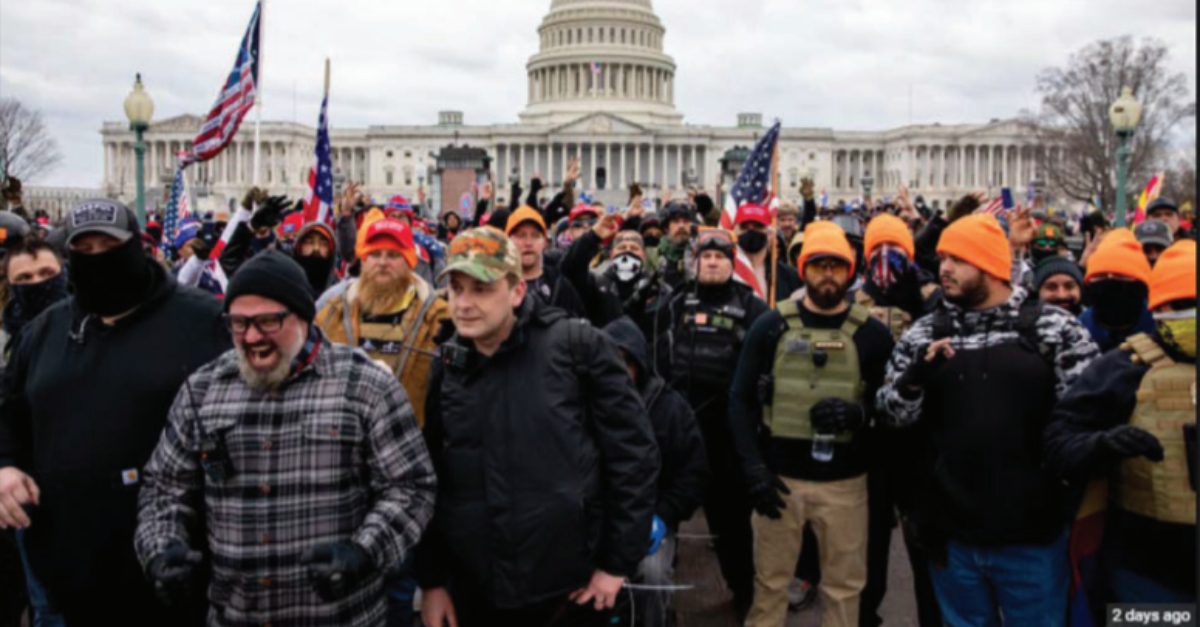 That’s supposed to be Joseph Biggs, bespectacled near the lower-left-hand corner.

The FBI notes that Tarrio promoted a demonstration in D.C. to take place Jan. 6, and Biggs followed up with a similar one. The FBI suggested that both addressed their statements to “antifa.” From the affidavit [emphasis ours]:

For example, on December 29, 2020, Tarrio posted a message on the social media site Parler about the demonstration planned for January 6, 2021. Among other things, Tarrio announced that the Proud Boys would “turn out in record numbers on Jan 6th but this time with a twist… We will not be wearing our traditional Black and Yellow. We will be incognito and we will be spread across downtown DC in smaller teams. And who knows….we might dress in all BLACK for the occasion.” I believe the statement about dressing in “all BLACK” is a reference to dressing like the group known as “Antifa,” who the Proud Boys have identified as an enemy of their movement and are often depicted in the media wearing all black to demonstrations.

10. On or around the same day, BIGGS posted a similar message to his followers on Parler in which he stated, among other things, “we will not be attending DC in colors. We will be blending in as one of you. You won’t see us. You’ll even think we are you . . .We are going to smell like you, move like you, and look like you. The only thing we’ll do that’s us is think like us! Jan 6th is gonna be epic.” I understand that BIGGS was directing these statements at “Antifa.”

Tarrio would not make it to the Capitol. He was barred from D.C. because of the firearms case. But Biggs showed up, authorities said.

Investigators said they interviewed the defendant on Monday. According to the feds, Biggs admitted to being in D.C. and to entering the Capitol Building, but he insisted that the doors of the Capitol were wide open when he entered. He denied knowledge of any pre-planning of storming the building.