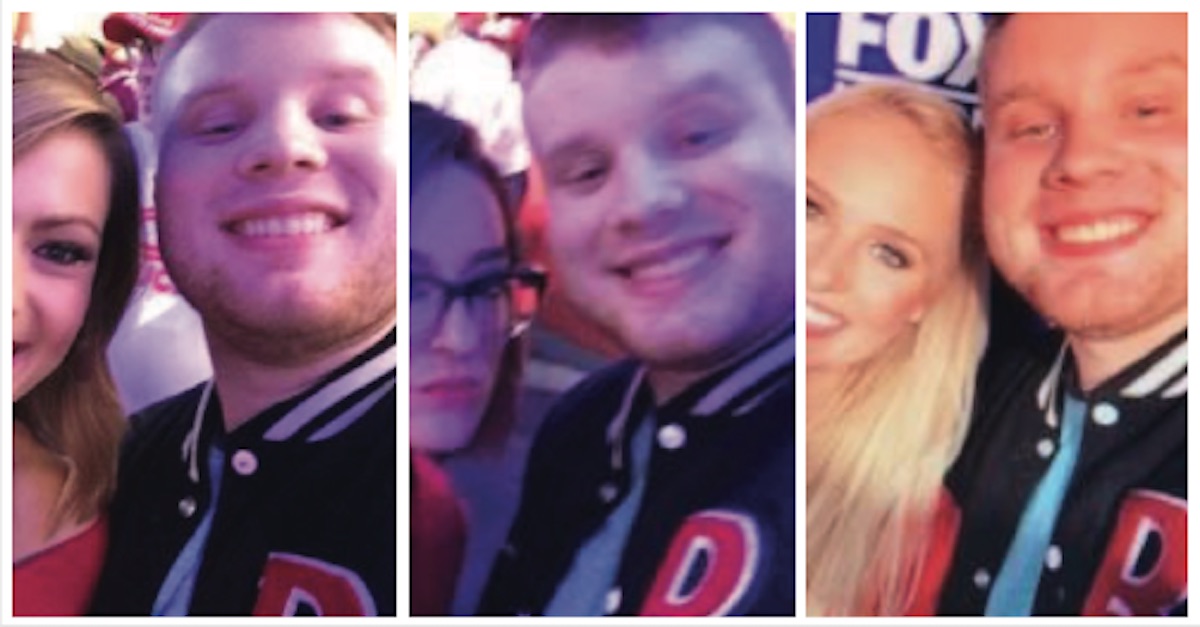 Brian Gundersen pictured with Lisa Boothe, Kennedy, and Tomi Lahren at an event.

A 26-year-old man was arrested on Wednesday in Pennsylvania weeks after he allegedly stormed the Capitol in his varsity jacket. Brian Gundersen’s decision to wear that varsity jacket on Jan. 6 turned out to be important because the feds received photo tips of him wearing the same jacket in a trio of pictures with Fox hosts.

The image, which you can see above, shows a smiling, varsity-jacketed Gundersen in pictures with Fox News contributor (“frequent guest co-host on ‘Outnumbered’ and ‘The Five’“) Lisa Boothe, Fox Business’s Kennedy, and Fox Nation host Tomi Lahren.

A person familiar with the matter told Law&Crime that these photographs were taken at a Fox Nation meet-and-greet event several years ago. There, fans had opportunities to take pictures with Fox News personalities like Boothe, Kennedy, and Lahren.

Law&Crime reached out to Fox News for comment on the photographs. A Fox News spokesperson said that, “As public figures, FOX Nation talent are often asked to take photos with fans at events.”

“The images in no way serve as endorsements of Mr. Gundersen or his recent actions, nor do Kennedy, Tomi Lahren or Lisa Boothe have any recollection of meeting him,” the statement said.

The affidavit includes an image of a CNN screenshot that shows an individual in a varsity jacket, the letters “Byra,” and a two-digit number on the sleeve that ended in zero. 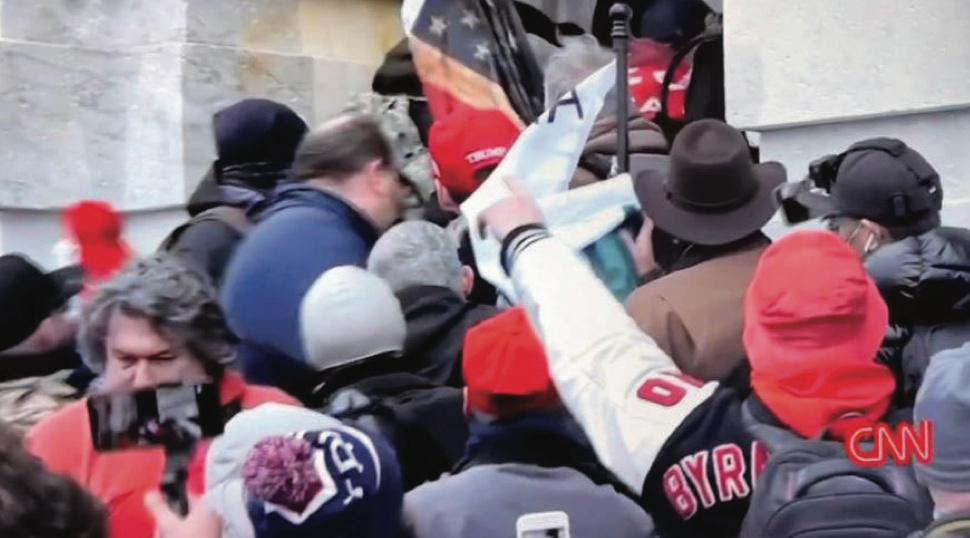 The FBI linked up with the police chief in the Town of North Castle in New York. That chief spoke with Byram Hills High School officials, and they confirmed that the jacket seen in the image was one of their varsity jackets.

The feds followed up by saying they believed the individual was Gundersen.

The number on the sleeve of the jacket was determined to be “70” (and an image of Gundersen wearing a football uniform showed that he wore no. 70).

The FBI soon turned its attention to Gundersen’s Facebook page, having received a tip. The feds said a “group of Byram Hills alumnae” reported that they believed the individual storming the Capitol was Gundersen “based on their knowledge of GUNDERSEN and his views” and based on the Byram Hills jacket.

The pictures of Gundersen wearing the jacket with Fox personalities came from a search of a database of photo tips the FBI had received from the public, authorities said.

The affidavit ended with some pretty cringeworthy and self-incriminating messages that were allegedly found on Gundersen’s phone:

The FBI said Gundersen consented to the search of the phone and admitted that he was inside the Capitol for roughly 10 minutes, though he claimed he was pushed inside by the surrounding mob of people.

As a result of all of this, Gundersen faces several charges, including: “knowingly entering or remaining in any restricted building or grounds without lawful authority; knowingly, with intent to impede government business or official functions, engaging in disorderly conduct on Capitol grounds; engaging in disorderly or disruptive conduct on the Capitol buildings or grounds; parading, demonstrating, or picketing in the Capitol buildings.”

The docket currently lists federal public defender Gerald A. Lord as Gundersen’s attorney. Law&Crime has reached out for comment.

An order setting the conditions of release noted that Gundersen would reside with his mom in Pennsylvania. A virtual court appearance in the U.S. District Court for the District of Columbia has been set for 1 p.m. on Feb. 2.