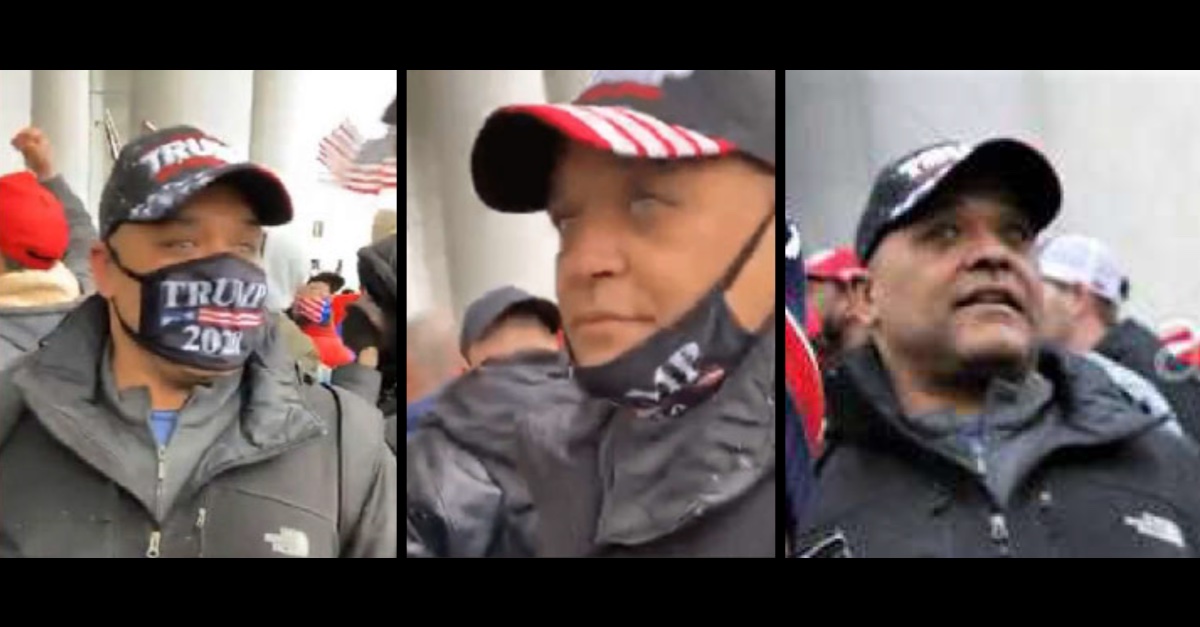 A defendant identified as Shane Woods is seen in three images provided by the FBI.

Federal authorities have charged an Illinois business owner with attacking a photojournalist and damaging newsgathering gear outside the U.S. Capitol on Jan. 6th, the Department of Justice announced on Thursday.  He is the first of the hundreds of individuals charged in connection with the siege to have been charged with an attack on the media, the DOJ pointed out.

Woods was identified by tipsters who saw images of him taken from various positions around the Capitol Complex on Jan. 6th.  Those tipsters included his own customers and an individual who held a “teaching position” at a college Woods attended in the “early 2000s.”  He was easy to for those informants to pick out of photos online due to his bright eyes, according to federal court documents. 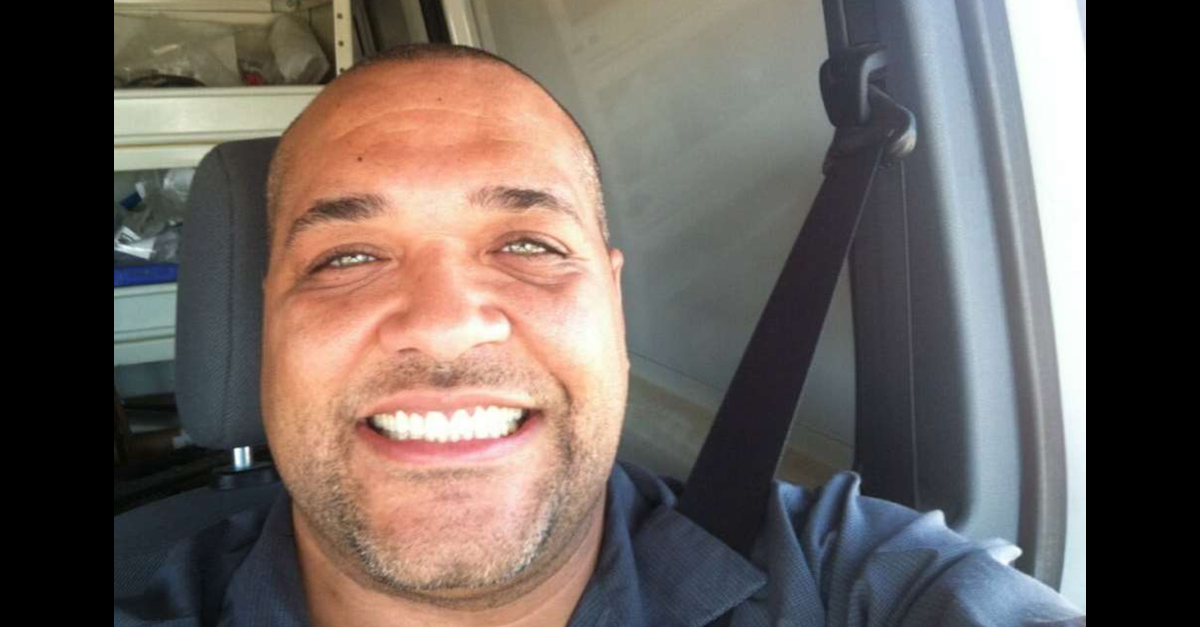 This Facebook image of Shane Woods is embedded in federal court documents.

Woods went to the capitol building on Jan. 6th wearing “a black North Face jacket, black pants, a black Under Armour backpack, black and white Nike shoes, and a mostly black baseball cap with a stars and stripes brim and “TRUMP” written across the front,” court records say.  He also was seen sometimes donning a “mostly black surgical mask with ‘TRUMP 2021′ written on it.”

The FBI agent — who by then was on Woods’ trail — said in court records that the defendant appears to have used his business’s financial accounts while traveling to and from the nation’s capital.  Authorities believe Woods drove all the way from Illinois to Washington, D.C., with at least one other person:

A review of Auburn Heating and Air Conditioning LLC’s small business checking account records, shows that WOODS was one of the two authorized signers on the account as of March 26, 2021. I identified several charges made to this bank account in and around Washington, D.C. between January 5, 2021, and January 7, 2021. On January 5, 2021, purchases were made at Sheetz and Taco Bell, located a short distance from each other off Interstate 68 in Lavale, Maryland. According to Google maps, Interstate 68 is along the most direct driving route between Auburn, Illinois and Washington, D.C.

Other bills were also tracked and outlined in the FBI agent’s affidavit.

Woods photographed certain waypoints on the trip from Illinois to D.C. and took pictures at the capitol on Jan. 6th.  The FBI now has those images.

Federal authorities also have obtained his messages with various associates.

“Please don’t get arrested,” one person told him on Jan. 6th.

“The swarm will be coming in an hour or two . . . Glad you guys made it safe . . . Grab an Antifa by their hair and send them rollin will ya?” another person wrote to him that day.

Discussions dating back to early December indicated to federal authorities that Woods spent time planning to be at the U.S. Capitol on Jan. 6th.

“Trump wouldn’t be golfing if he was worried,” the defendant said to one Facebook user in a December 1, 2020 conversation now contained in the public record.

“True,” the other person replied. “I hope he has an ace in his pocket[.] I want to see all those asshats go to jail too.”

By January 19, 2021, thirteen days after the siege, the tone changed considerably.

“Has the FBI come after you yet[?]” yet another acquaintance asked the defendant.

His reply, if any, is not included in the current court record.

On Jan. 6th, Woods is accused of tripping an officer who had been sprayed with bear mace by another individual.  Several video screen grabs, including the one embedded below, show the alleged assault. 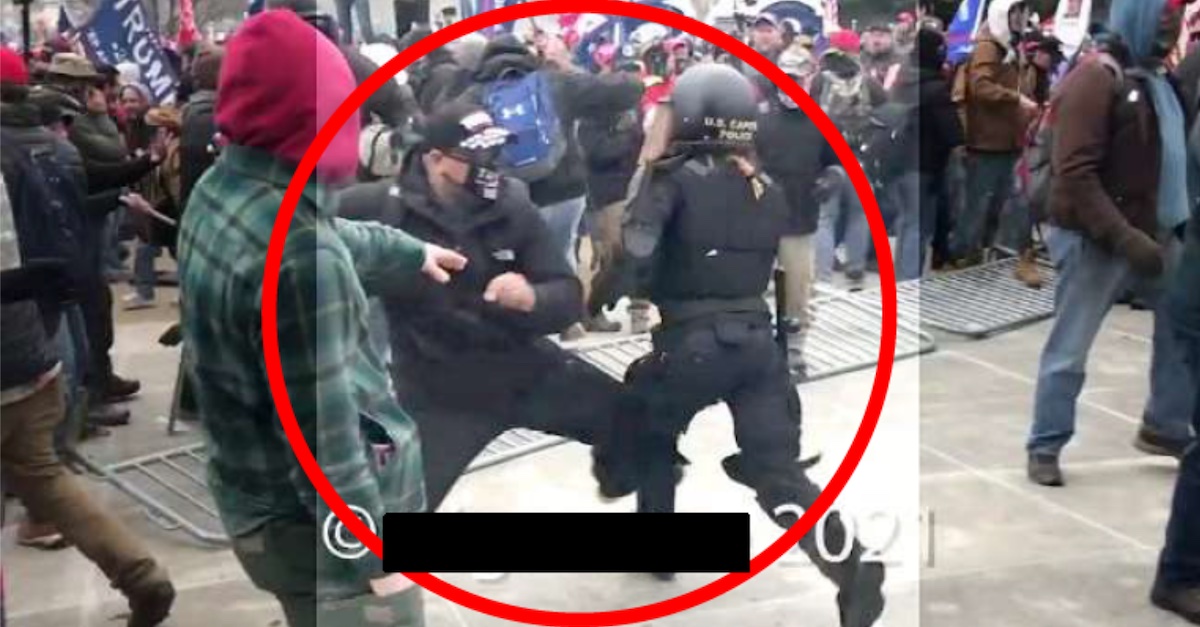 From there, Woods is accused of joining a mob which forced assembled reporters to both abandon their posts and their gear.  The charging documents on file in federal court describe it this way:

At approximately 4:50 p.m., on January 6, 2021, a large crowd made its way to and/or past a media staging area that was set up outside the northeast corner of the U.S. Capitol, on U.S. Capitol grounds. As individuals moved past metal barricades that had been set up around the staging area, media members were forced to flee the area before recovering all their cameras and associated equipment. Numerous members of the crowd began to destroy the equipment, including cameras, tripods, lights, shades, and remote broadcasting equipment that belonged to various media outlets. Numerous members of the crowd yelled inflammatory rhetoric against the members of the media. One member of the media who was forced to flee the scene estimated that the equipment from his particular news organization that was destroyed was valued at between $30,000 and $34,000.

Woods is accused of “standing with protesters who are yelling and spitting at members of the news media,” the court documents say.

Then, Woods “is observed running into and tackling” a cameraman dressed in blue jeans and a blue jacket “as the cameraman is facing away from WOODS.”

“The manner of attack on the cameraman was very similar to the attack” on the Capitol Police officer Woods is also charged with assaulting, the documents say. 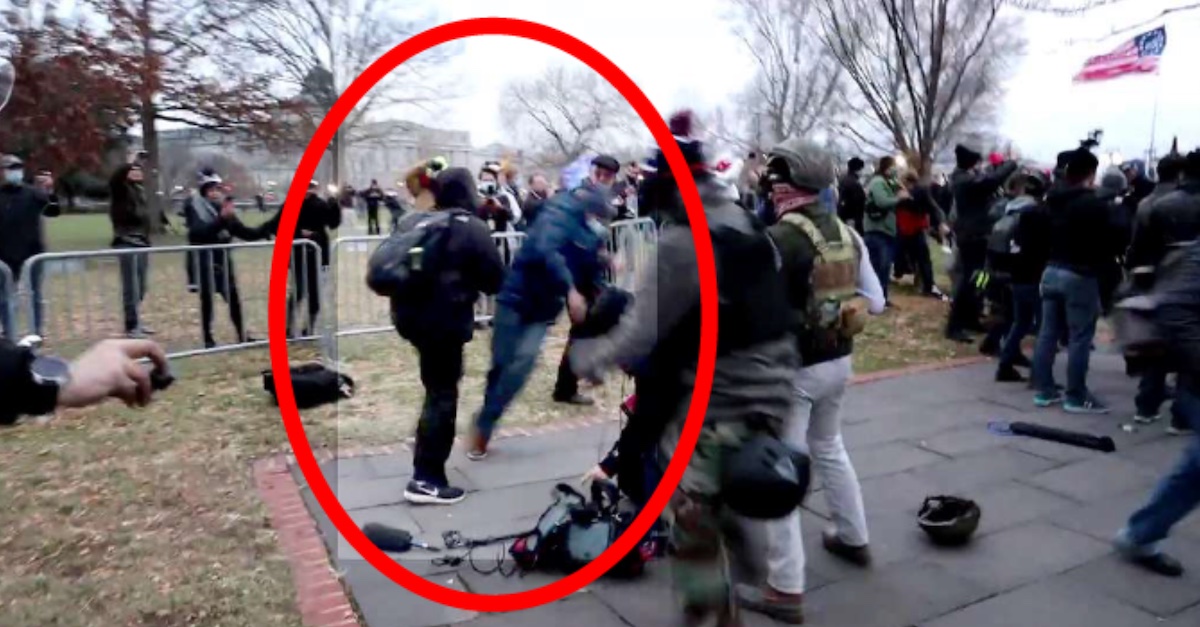 Woods was scheduled to appear in federal district court for the Central District of Illinois on Thursday afternoon.  The court docket in his case has not yet been made public.

[all images via federal court documents]