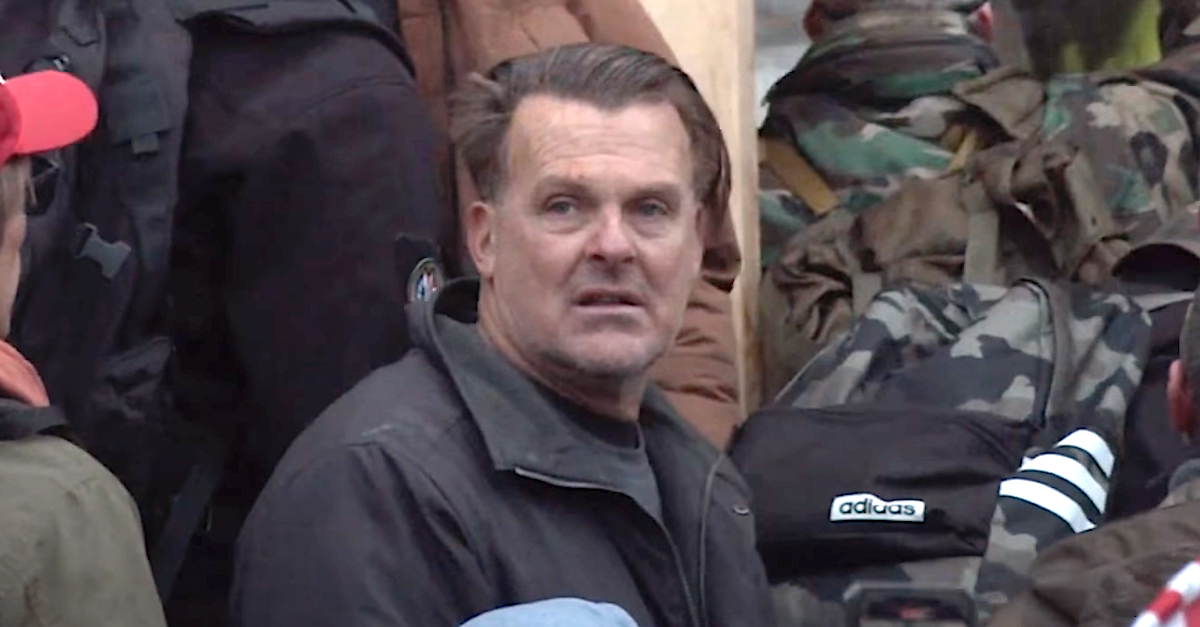 A man identified as Clayton Mullins is seen standing near an archway at the U.S. Capitol in Jan. 6, 2021. Federal prosecutors used a virtually identical image in a criminal complaint against Mullins. (Image via YouTube screengrab)

Federal prosecutors in Washington, D.C. have identified and charged a man they say assaulted a Capitol police officer during the Jan. 6th siege on the U.S. Capitol Complex. According to a criminal complaint unsealed Wednesday, the defendant, Clayton Ray Mullins, stood out in videos of the scene due to his hairstyle. Mullins is accused of attacking an officer known in the documents only as “A.W.”

“In the footage, MULLINS was observed wearing a dark colored jacket, black gloves and light blue jean pants,” the complaint reads. “Numerous videos and photographs of MULLINS assaulting A.W. were posted on Twitter, primarily under the hashtag #seditionhunters. In addition, the hashtag #slickback began trending in relation MULLINS and the slicked back style in which he wore his hair.”

Officer A.W. reported that he was pulled into the crowd outside the Capitol Complex, kicked, stomped, and struck with poles, the documents say. The crowd ripped off his helmet, sprayed him with mace, and took his baton, his gas mask, and his department-issued cell phone. A.W. was able to take back his gas mask and retreated into a capitol tunnel. Once inside, another officer noticed A.W. was bleeding; the head wound required two staples.

The documents say Mullins grabbed A.W.’s foot and helped the crowd drag the officer down a set of stairs. Another officer tried to hold A.W.; what resulted was a “battle of tug of war” between the crowd and the other officer — with A.W.’s body in the middle. 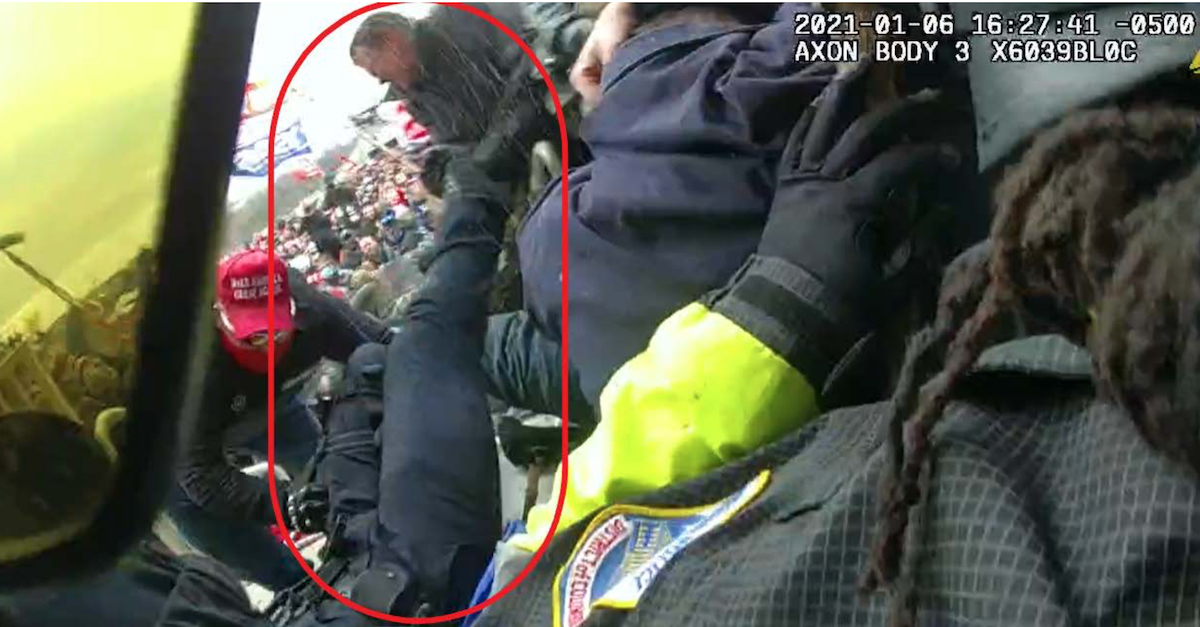 Several tweets and videos are embedded within the federal court documents. Among them are these:

NYT has a photo showing #slickback initiated attack on an officer, by pulling him off balance & down the stairs.
The dude remains unknown and must be identified & charged https://t.co/fkP83NYi8f pic.twitter.com/JRGYH1z0Mx

One of the videos referenced in the complaint remains active on YouTube; some of the relevant scuffle is below. The video, as reviewed by Law&Crime, shows the man identified as Mullins attempting to scale a wooden frame built around a capitol archway. A scuffle ensued; pepper spray flew through the air. Though the encounter was heated and violent, Mullins appears from the angle below to at times hang back from the front line of the melee; he also pauses several times to blink and wipe his eyes.

Other videos show the violence from a different angle. In another video reference in the complaint, which is also embedded below, the man identified as Mullins can be clearly seen grabbing the foot and leg of what appears to be a law enforcement officer and engaging in the aforementioned “tug of war” with the officer’s body:

Authorities tracked down Mullins due to a tip that he held a Kentucky driver’s license. Authorities used that information to track down his bank accounts; a witness known in the documents only as W-1 at FNB Bank, Inc., told investigators that Mullins had banked with the company for 30 years. W-1 identified Mullins in a photo taken at the capitol on Jan. 6th. 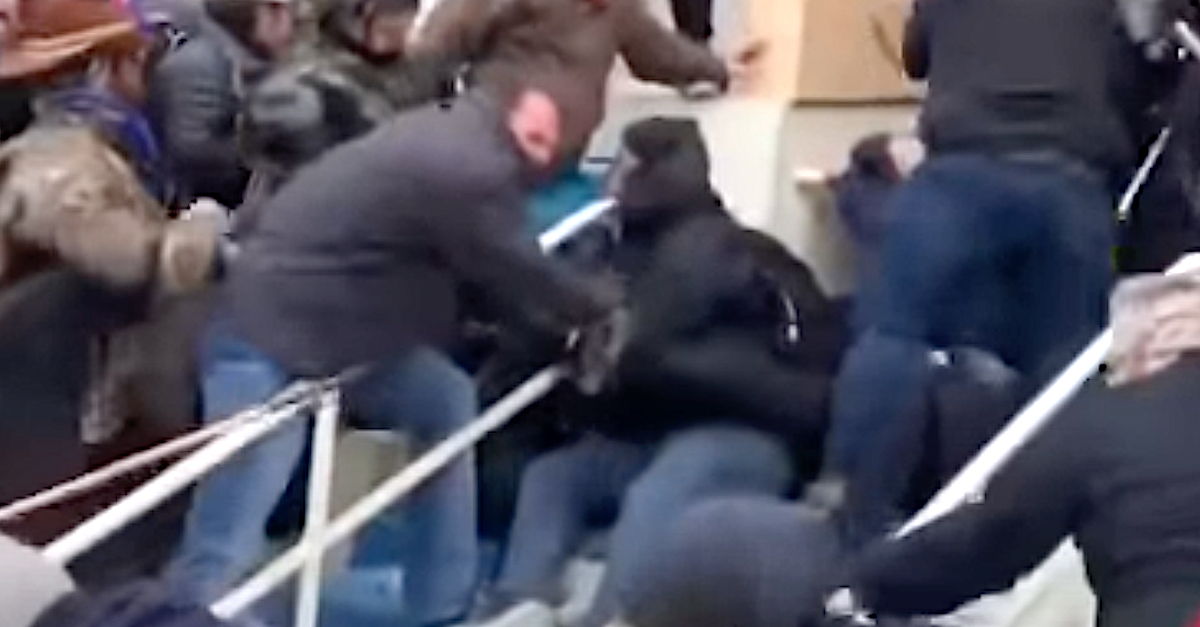 Video taken outside the U.S. Capitol on Jan. 6, 2021, shows a man prosecutors have identified as Clayton Ray Mullins grabbing an officer’s foot during a violent clash. (Image via YouTube screen grab.) 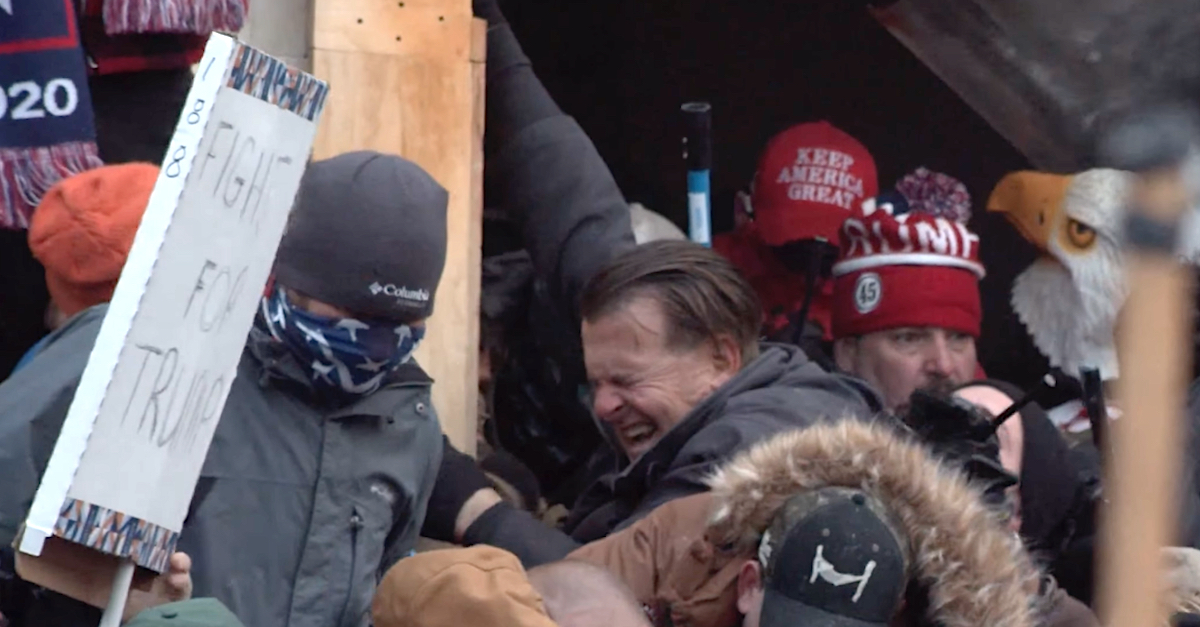 A man federal prosecutors have identified as Clayton Mullins is seen scaling an archway at the U.S. Capitol on Jan. 6, 2021. (Image via YouTube screen grab.)

A photo of Mullins at the bank on Feb. 4 was also shown.