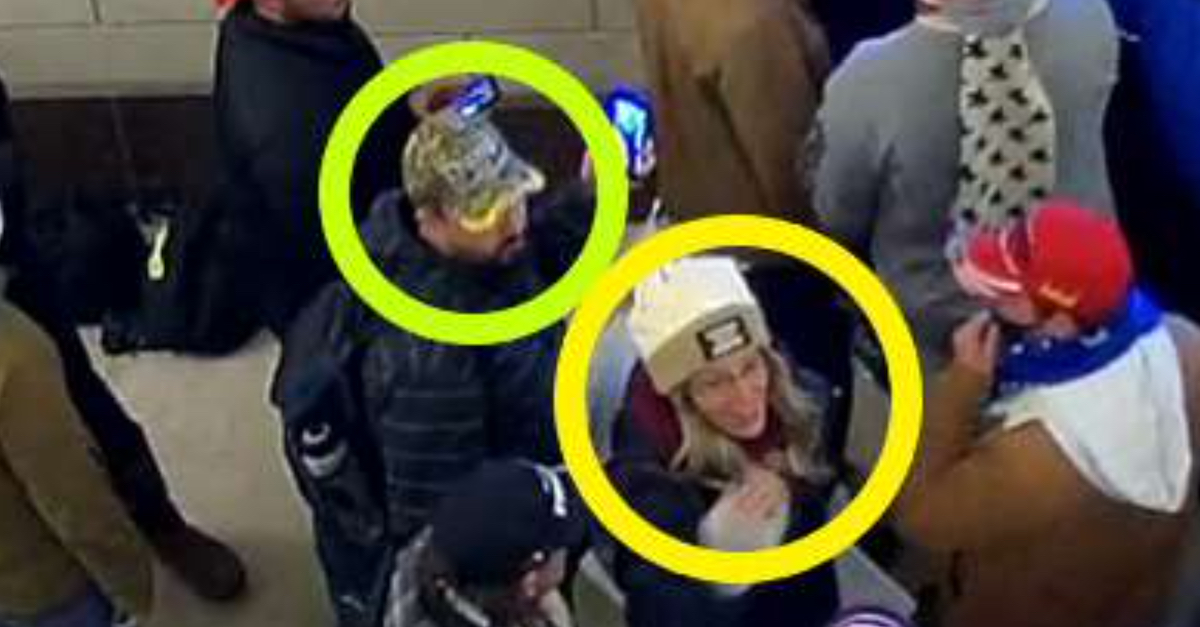 Federal authorities arrested a husband and wife in Bristol, Va., on Monday in connection with the Jan. 6th siege on the U.S. Capitol Building. Documents related to their cases were unsealed in federal court on Thursday.

Authorities say tips from the public led them to Joshua Bustle and Jessica Bustle. The couple is accused of entering the U.S. Capitol and posting about it on Facebook. Jessica Bustle’s multiple online accounts provided much of the evidence prosecutors used to compile a case against her, federal court documents indicate.

“Pence is a traitor,” one of Jessica’s posts read. “We stormed the capital. An unarmed peaceful woman down the hall from us was shot in neck by cops. It’s insane here. We’re safe and heading home but have limited service.”

The amount of misinformation I’m seeing is insane. Despite what you’re being fed, the rally was nothing like what the media is portraying. My husband and I spent the majority of our time at the Health Freedom Rally which was a couple of blocks over from the Trump Rally. When we finally decided to head over to the capitol we were let in . . . like literally, my husband and I just WALKED right in with tons of other people. The cops were nice . . . we were talking with them INSIDE of the capitol about not taking the CV tax and they agreed with us. There were no guns, weapons, and no violence. In fact, when we finally decided to go in after about 45min of it being wide open . . . there was a wooden podium UNTOUCHED just sitting there in the middle of trump supporters supposedly causing so much damage and mayhem. Yes, some Trump supporters were supposedly unruly . . . pushed past police to take selfies in congress seats.

What followed that was a bit of sarcasm and a claim that “ANTIFA puppets infiltrated the rally,” a claim that “Trump supporters are loving, patriot and peaceful people,” and that the mainstream media was full of “lies.”

As prosecutors have pointed out in case after case, the U.S. Capitol was officially closed to business Jan. 6 as Congress set to work counting electoral votes in favor of Joe Biden.

A Statement of Facts filed in federal court says Jessica Bustle had two Facebook profiles. Some of her messages were edited after they were originally posted, authorities stated. 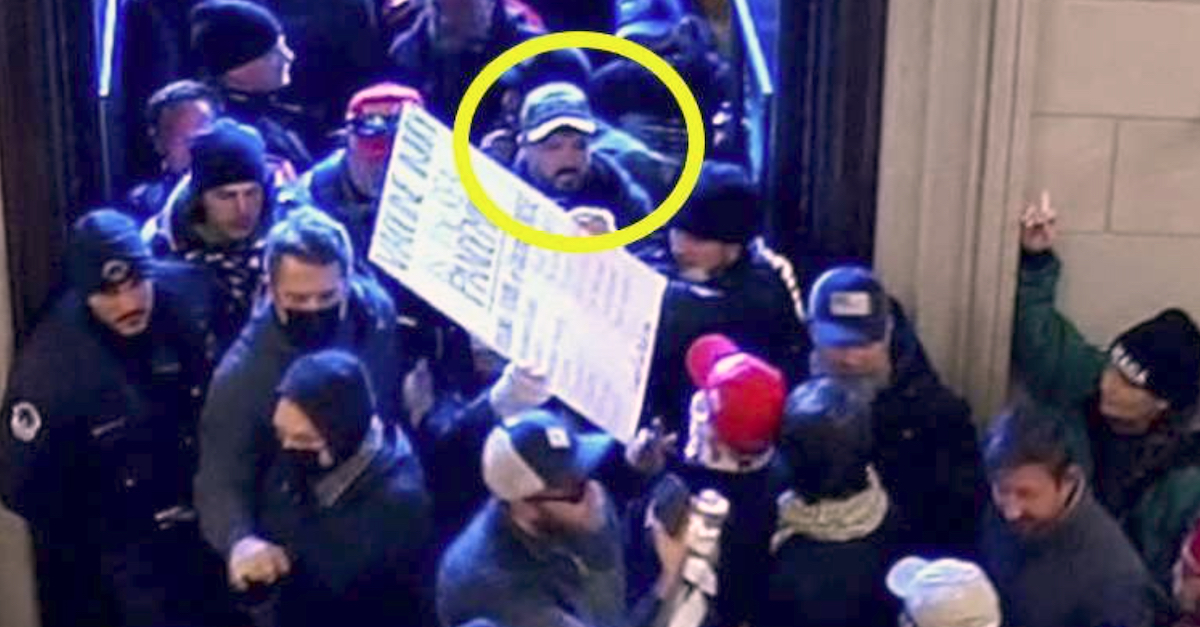 Individuals believed by federal authorities to be the Bustles are seen entering the U.S. Capitol on Jan. 6th.

An FBI Special Agent reviewed capitol surveillance video. It showed the Bustles entering the building wearing what is believed to be the same clothing they were wearing in Facebook posts that day. The video shows the woman authorities believe to be Jessica was carrying the same anti-vaccine poster seen in Facebook photos on Jessica’s Facebook account. The sign reads as follows: “MANDATORY MEDICAL PROCEDURES have NO Place in a FREE Society.” 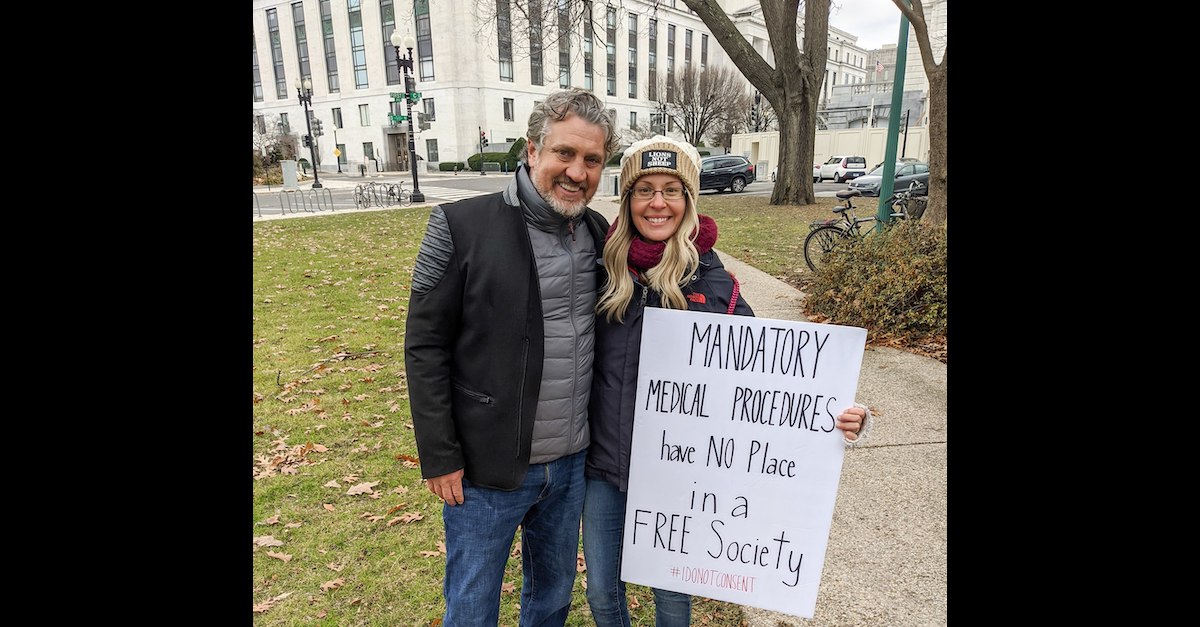 Data transmitted by the couple’s electronic devices also placed them at the U.S. Capitol on Jan. 6. Federal prosecutors did not cite all of the messages reviewed by Law&Crime in charging documents against the husband or the wife.

Jessica Bustle’s primary Facebook profile was still active as of Thursday. In the profile reviewed by Law&Crime, Jessica described herself as a “wife” and a “mama” who appeared to state a preference for homeschooling her young children. She described herself as a “Truth Seeker” who liked the Bible passage Philippians 4:13. She shared several memes which described people who took vaccines as “lab rat[s]” and otherwise suggested that children should “never” be injected with vaccines.

“Will vaccinated people be able to give blood?” one post questioned. “If so, will those receiving the blood be made aware?”

Another showed a caricature of Bill Gates and Dr. Anthony Fauci sitting on top of a giant needle. “Depopulation here we come” said the caption.

Yet another likened a COVID-19 vaccine card to a yellow Star of David similar to those the Nazis required Jews to wear during the World War II era. “This badge will allow you to go back to work, travel, buy, sell, and trade,” the meme erroneously claimed. “And it will cost you your soul.”

Other memes on her page chastised people who wore facemarks during the pandemic and said “millions of loving people” should get “together to overthrow the ruling class.”

She also shared a meme which questioned why “80 year old children’s books” were “being cancelled” while Cardi B’s song WAP was considered acceptable.

“You can have a bachelor degree and still be an idiot,” one post said.

“Masculinity isn’t toxic. The absence of it is,” read yet another. “Weak men are abusive and spiteful. Strong, masculine men are protective and loving.”

“I don’t know about you, but I’m not seeing posts about how great Biden is doing,” said another image.

Her occupation is described as a “Homemaker at The Bustle Household in Manassas, Virginia.” 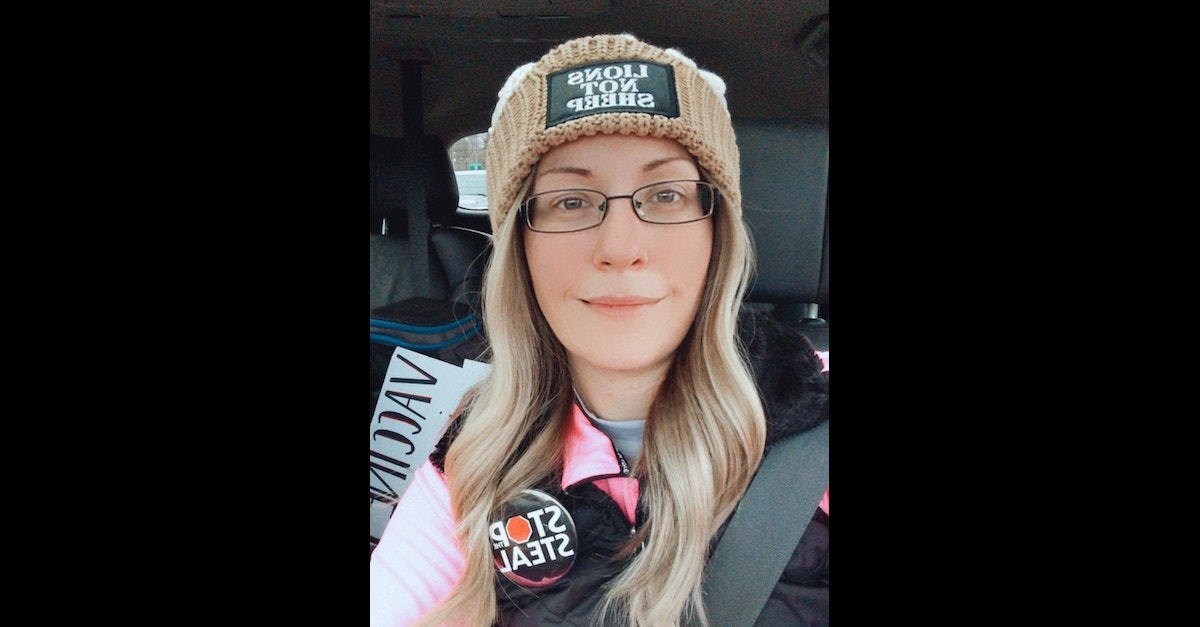 Jessica Bustle is seen in an image embedded within federal court documents. The image was originally posted on her Facebook page on Jan. 6.  Note the “Stop the Steal” button. “We don’t win this thing sitting on the sidelines,” Bustle wrote along with the photo, according to authorities. “Excited to stand for truth with my fellow patriots and freedom fighters in DC today.”

“I’ll be proud to say that I did not stay silent,” she wrote on Oct. 26, 2020. “I was on the right side of history, battling alongside some amazing freedom warriors as we fought like hell to get the TRUTH out and wake people up to the twisted agendas, lies and corruption. I’ll be proud to say I fought for every child’s life and right to live FREE and without fear.”

Other memes and posts shared images of ex-President Donald Trump and wished he would remain in the White House. One suggested on Nov. 11, 2020, that Joe Biden was trying to scrounge up write-in ballots to help solidify his win.

“The level of corruption going on in our government is unfathomable,” Jessica wrote on Nov. 14, 2020. “But, God is moving in this mess and exposing the hidden systems that have been in the shadows for far too long.”

“See y’all at the rally,” she concluded. In an attached image, Jessica wore a Trump shirt and hat, while Joshua wore a black “don’t tread on me” shirt. What followed were images posted on Nov. 17th of Trump supporters outside the U.S. Capitol and the U.S. Supreme Court building.

Several images were from the Jan. 6th events at the Capitol Complex.

“I refuse to fall for the hate and divide,” one post said. “Yesterday was monumental. I got to hang with so many amazing freedom keepers and my favorite dude [emoji] and he proudly proclaimed that WE’RE winning this war on medical freedom. [emojis] Our movement has grown to over 50% of people!!!! Y’all, that’s HUGE. So many people waking up and refusing to be injected with known toxins and poisons. [emojis]”

“Excited to stand for truth with my fellow patriots in DC today,” read a caption on another photo posted Jan. 6.

Another post questioned the authenticity of NASA’s moon landing.

The Bustles each face four counts: (1) knowingly entering of remaining in any restricted building or grounds without lawful authority; (2) knowingly engaging in disorderly or disruptive conduct in restricted buildings or grounds; (3) violent entry and disorderly conduct on Capitol grounds; and (4) parading, demonstrating, or picketing on Capitol grounds.

Bustle Statement of Facts by Law&Crime

[image via the U.S. Dept. of Justice/federal court documents]