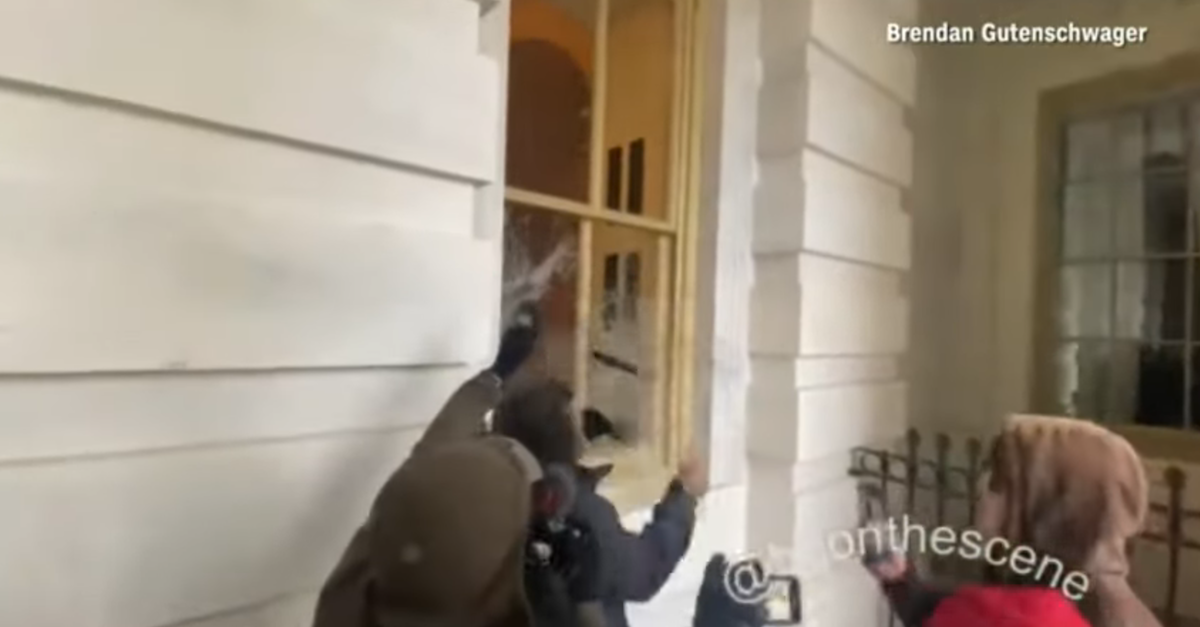 In the early stages of the U.S. Capitol siege, much of the nation watched aghast as footage showed a pro-Trump mob smashing through a window with a riot shield. Those agonizing moments receive detailed treatment in court papers filed against Hunter Allen Ehmke, a 20-year-old from California whom authorities fingered as the intruder.

The narration begins with a standoff outside of the Rotunda Door on the east side of the capitol building on First Street.  On Jan. 6, at 2:15 p.m., Capitol Police Officer Fluke (no first name provided) joined other officers to hold a Civil Disturbance Unit (CDU) line against the mob.

“Officer Fluke observed Ehmke pointing towards the window, followed by looking at the crowd to his south and waving his hand as if to summon others over to his position,” Capitol Police agent James Soltes recounts in court papers. “Ehmke repeated the sequence of gestures again.”

At that point, Officer Fluke said he hoped to get his comrades’ attention by shouting out, “They’re going to break the window.”

“Officer Fluke looked east to focus back on the crowd pushing on the shields and gave orders for the growing crowd to get back,” Soltes continues. “Officer Fluke turned to look north again and observed Ehmke with a balled fist, pulling his arm back and twisting his upper body. Ehmke then swung forward striking a pane of the window about shoulder level of Ehmke. Officer Fluke began to run toward Ehmke while continuing to hold his shield in both hands.”

As Officer Fluke reached Ehmke, he shouted, ‘Get away from the window’ and pushed the shield forward striking Ehmke in the lower torso and upper leg on Ehmke’s left side in attempt to push Ehmke away from the window. This disoriented Ehmke, but he remained standing on the ledge. While using the CDU shield again, Officer Fluke attempted to push Ehmke again, causing Ehmke to fall to the ground on the landing. Officer Fluke lost grip of the shield and fell to the ground that was covered in shards of glass. While Ehmke lay face-down on the ground, two other officers with the U.S. Capitol Police pulled Ehmke’s arms behind his back and detained him with handcuffs. Office Fluke stood up and gave orders to the crowd to stay back and set a perimeter.

Officers moved north on the landing to set up a perimeter with CDU shields between a crowd of approximately ten individuals in the immediate area and the two officers, Officer Fluke, and Ehmke. This small perimeter line of officers also blocked possible attempts of breaching the now visibly broken window which, to Officer Fluke’s knowledge, did not show signs of breakage prior to Ehmke striking the window. Ehmke was assisted onto his feet. USCP Officer Mooney obtained Ehmke’s California driver’s license and positively identified him as Hunter Allen Ehmke.

According to court papers, the situation began to spiral out of control as one of rioters taunted Fluke by threatening “you’re not leaving with him,” pointing at the officer and the suspect.

“Due to the growing aggression of the large crowd that far outnumbered the officers and the exigent circumstances at the time, officers made the decision to allow Ehmke depart under his own power,” court papers state. “Officers took photos of Ehmke and the damaged window. Officers advised Ehmke that his actions were criminal and that they would seek a warrant for his arrest. Ehmke was told to immediately leave the Capitol grounds. Officers maintained custody of Ehmke’s driver’s license upon his release.”

The Department of Justice unsealed the case on Thursday, and Ehmke’s initial hearing has been scheduled for Jan. 21, the day after the inauguration of President-elect Joe Biden that rioters hoped to derail.