Philadelphia Man Threw ‘What Appears to Be a Coffee Tumbler’ at Police on Jan. 6, Feds Say 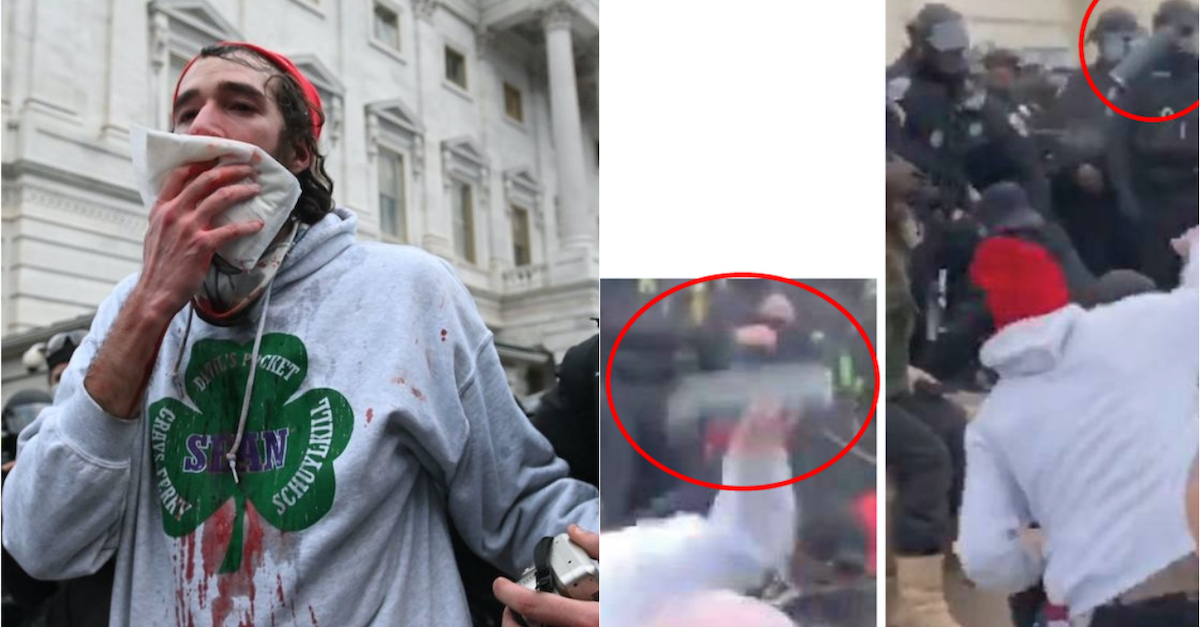 A resident of the City of Brotherly Love threw “what appears to be a coffee tumbler” at law enforcement on Jan. 6, striking an officer in the face and chest, federal prosecutors alleged.

Michael James Dickinson, a 30-year-old from Philadelphia, Pennsylvania, was arrested and charged with several crimes on Oct. 6, including assaulting law enforcement, civil disorder, entering and remaining in a restricted building, and other charges.

The FBI credited an anonymous tipster identified in court papers as “T-1” for alerting them that the man seen throwing the apparent tumbler in the video was Dickinson. The tipster added that the Keystone State suspect “was later injured and is in a DC hospital,” authorities say.

“T-1 indicated that he or she was familiar with Dickinson through mutual acquaintances,” the affidavit states. 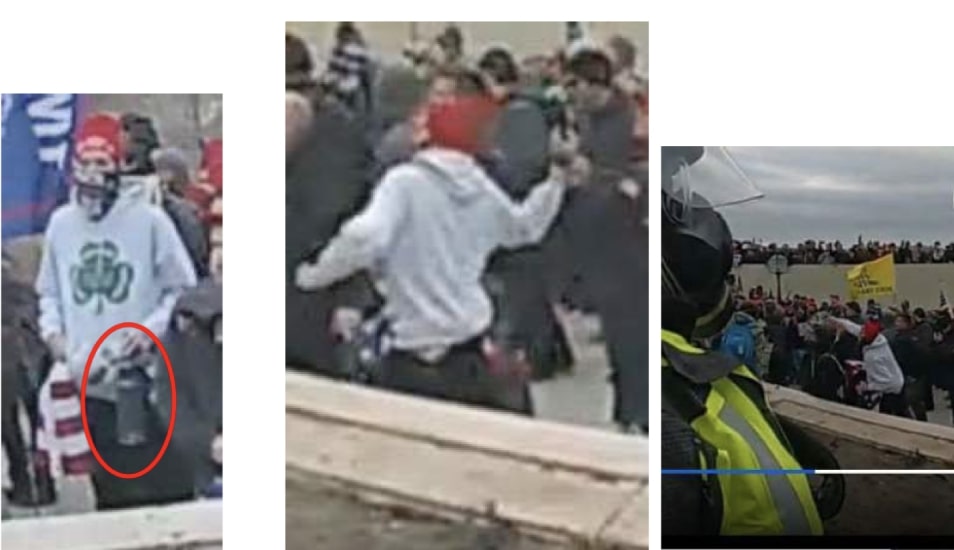 “Additional footage, received through a second tipster and open-source searches, shows Dickinson picking up an object appearing to be a large bucket filled with a liquid and throwing the liquid and the bucket at law enforcement officers who, based on your affiant’s review of the video, appear to be attempting to clear rioters from the Capitol grounds,” the affidavit states. 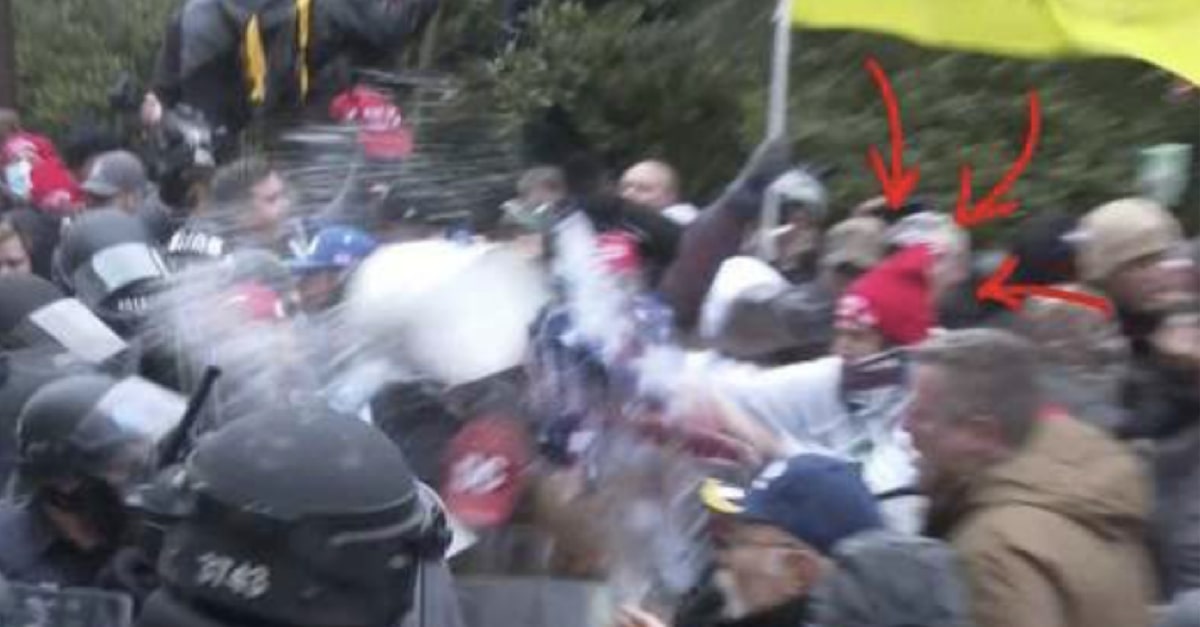 Consistent with the tipster’s lead, the FBI found video of Dickinson’s face bleeding. They also found images captured by photojournalists from the Getty news wire. 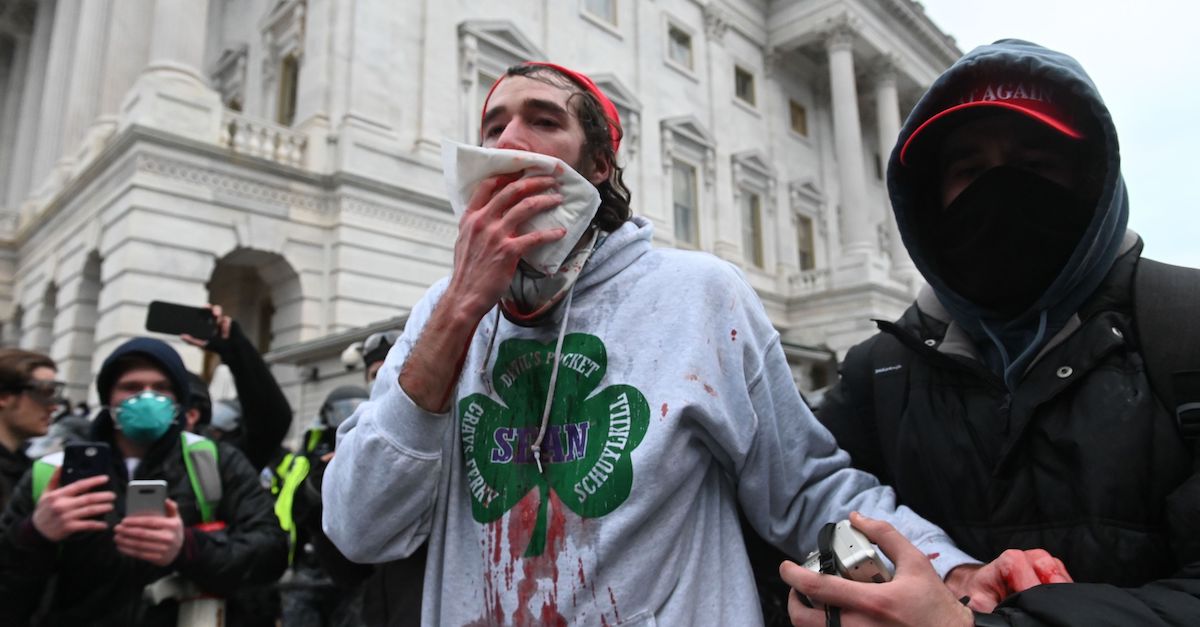 Prosecutors included this Getty photograph of Michael Dickinson bleeding in an affidavit charging him with assaulting police on Jan. 6. (Photo by ROBERTO SCHMIDT/AFP via Getty Images)

According to the affidavit, those medicals records corroborated others authorities gathered of Dickinson from his Pennsylvania Department of Transportation identification card. Authorities say the records indicated that Dickinson sustained facial injuries from a rubber bullet.

Investigators also say they found Dickinson from the distinctive sweatshirt he wore on Jan. 6, featuring a green shamrock on the front with the words “GRAYS FERRY,” “DEVIL’S POCKET,” “SCHUYKILL,” and the name “SEAN” in the middle.

“Your affiant knows based on open-source research that the sweatshirt was made in memory of a Philadelphia, Pennsylvania resident,” the FBI agent wrote.

The newly announced charges add to an ever-burgeoning Jan. 6 docket that has snared more than 600 people from nearly all 50 states. At least 185 individuals charged with assaulting or impeding law enforcement, prosecutors say.

Dickinson’s case also speaks to the variety of the methods Jan. 6 defendants allegedly used to assault law enforcement. Prosecutors have accused others of assaulting police a PVC pole, a flagpole, a Taser, a fire extinguisher, pepper spray, metal barricades and other weapons. One rioter stands accused of stealing an officer’s badge and burying it in his backyard.