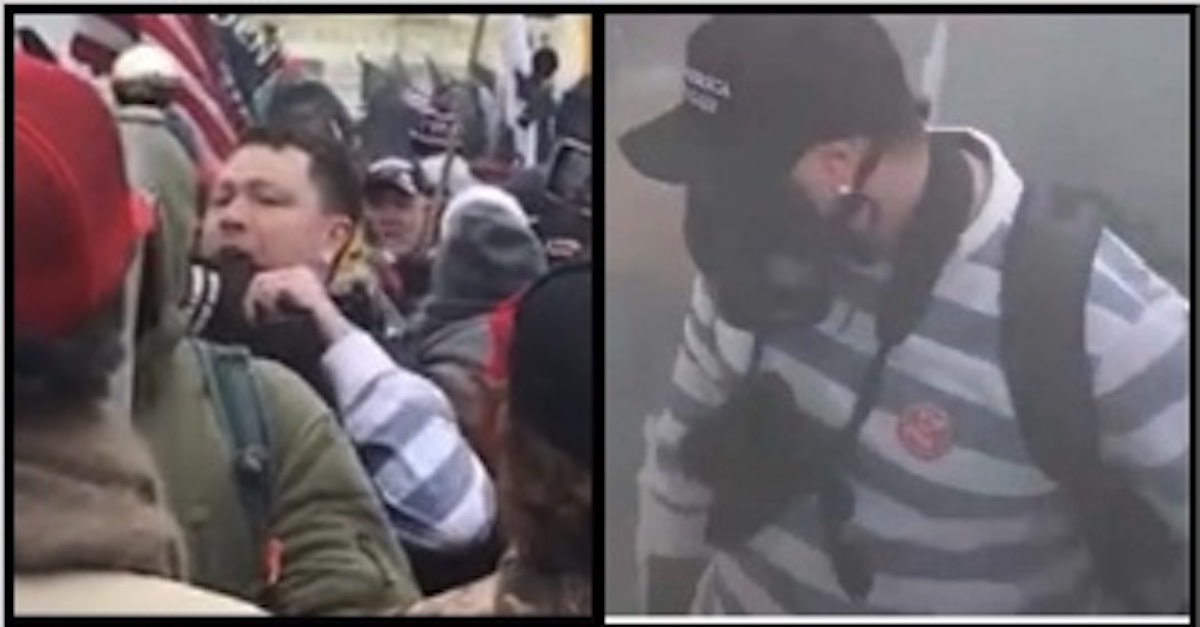 A federal judge has ordered a Virginia man accused of assaulting multiple police officers and using a strobe light to disorient them during the Jan. 6 Capitol attack to remain in detention.

Geoffrey William Sills is charged as part of a nine-defendant case. Prosecutors believe the group led a surrounding crowd into a crushing melee that injured multiple members of the police. Sills is accused of using a strobe light to disorient officers; he also allegedly stole a police baton and used it to assault multiple cops who were trying to protect the Capitol Complex from the riotous crowd. His co-defendants are Patrick Edward McCaughey III, Tristan Chandler Stevens, David Lee Judd, Christopher Joseph Quaglin, Robert Morss, David Mehaffie, Steven Cappuccio, and Federico Guillermo Klein.

Sills had requested that he be released from detention. He argued that he wasn’t a danger to the community and that other defendants engaged in more dangerous conduct on Jan 6 had been released from jail pending trial.

“At face value, the allegations against Mr. Sills do not place him in the small subset of Jan. 6 participants that this court and this circuit deem appropriate for pretrial confinement,” attorney John Kiyonaga argued to U.S. District Judge Trevor McFadden on Friday. “Setting aside the purple adjectives and adverbs in the government’s pleading, it is conduct no worse than a great many defendants whose issues have been considered and who have in fact been released.”

Approximately 140 officers were assaulted at the Capitol when scores of Donald Trump supporters overran police forces to breach the building in an attempt to stop Congress from certifying Joe Biden’s win in the 2020 presidential election.

Judge McFadden, a Trump appointee, denied Sills’ request, saying that the government had shown by clear and convincing evidence that “no condition or combination of conditions” will ensure the safety of the community if Sills is released.

“The defendant apparently came with a gas mask, tactical gloves, [and] a strobe light,” McFadden said. “He says he did this because he was afraid of Antifa or what have you. Maybe that’s true, but at this point I can take this as evidence of planning, and certainly evidence that this is not someone who is just coming for a political rally but expects to get into a violent confrontation, and that’s exactly what he did.”

McFadden added: “The fact that he disarmed a police officer, stealing his baton and using it to assault that officer and other officers also [weighs] heavily for the defendant’s dangerousness and the need for him to be detained.”

McFadden said he wasn’t swayed by Sills’ implication that Trump was responsible for the riots by telling his supporters to go to the Capitol, and that once they arrived, “the protesters were entitled to do as the President directed.”

“I reject the defendant’s argument that President Trump somehow authorized this,” McFadden said. “Of course the president can never authorize someone to violate the law, and it’s not at all clear to me that whatever else President Trump said was somehow blessing what was occurring in the Lower West Tunnel.”

Even if Trump did endorse the violence, McFadden said, “it would not be a justification for releasing the defendant here.”

It was also revealed during the hearing that six of the nine defendants have rejected plea deals; Quaglin, Morss, Mehaffie, Cappuccio, Klein, and Sills himself all confirmed Friday that they would not accept the government’s officers to plead guilty to some of the charges in exchange for other charges being dropped.

The rest of the hearing was devoted to pretrial issues, key among them the matter of discovery. Prosecutors told McFadden that additional tranches of discovery would be available to the defendants.

Some of the defense attorneys expressed frustration that discovery was still ongoing, and McFadden appeared to share their concerns.

“The investigation has been going on for more than a year now. We need to get to the bottom or near the bottom of global discovery,” McFadden said.

“I think my willingness to continue to toll the speedy trial clock while the government doesn’t tell me how much longer this is going to take is wearing thin,” he added.