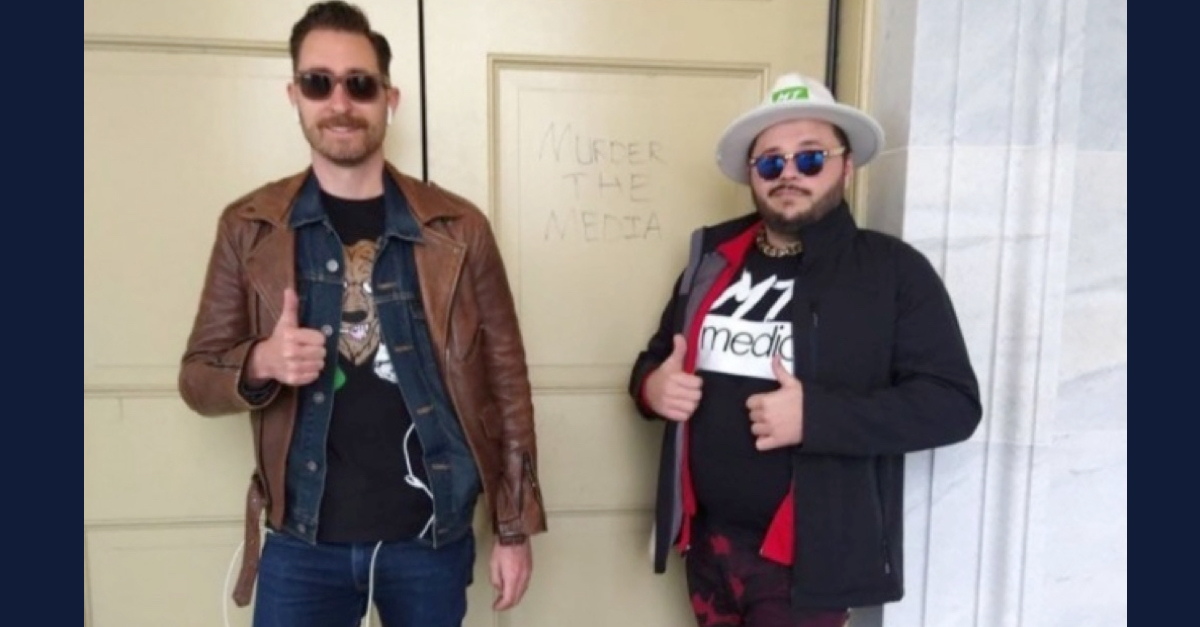 Nicholas Ochs and Nicholas DeCarlo inside the Capitol on Jan. 6, standing in front of ‘Murder the Media’ inscribed behind them (via FBI court filing).

The men behind the “Murder the Media” social media channel who jubilantly stormed the U.S. Capitol on Jan. 6 and celebrated afterwards have pleaded guilty to a felony.

Nicholas DeCarlo, 32, and Nicholas Ochs, 36, appeared before Chief U.S. District Judge Beryl Howell on Friday and pleaded guilty to the charge of obstruction of an official proceeding, a felony punishable by up to 20 years in prison and a maximum $250,000 fine.

They acknowledged to meeting up in Virginia on Jan. 5, with Ochs traveling from Honolulu and DeCarlo traveling from Texas. The next day, after attending the so-called “Stop the Steal” rally in support of then-President Donald Trump, who encouraged his followers to march to the U.S. Capitol as Congress was certifying Joe Biden‘s 2020 electoral win.

According to prosecutors, they arrived at the West Front near scaffolding that had been set up for Biden’s pending inauguration. Some time later, both men threw smoke bombs at a line of police that was trying to hold back the crowd, although DeCarlo admitted that, as he told Ochs at the time, he had forgotten to remove the pin from his device.

They then climbed the stairs to the Upper West Terrace and entered the Capitol through the Senate Wing Door at around 2:23 p.m., some 10 minutes after the initial breach of the building. They moved through the Crypt — where they filmed themselves smoking cigarettes — and also went to the Capitol Visitor’s Center, East Foyer, Statuary Hall, and the Rotunda.

At that point, the men approached a building named for two Capitol Police officers who were killed in the line of duty, where DeCarlo defaced the door with a permanent marker. The men also rummaged through a bag belonging to a U.S. Capitol Police officer near that door, and DeCarlo admitted to taking a pair of flexicuffs.

At the start of the standard colloquy between judge and defendant that normally occurs at plea agreement hearings, Howell, a Barack Obama appointee, asked DeCarlo to state what level of education he has attained.

“I finished high school,” he said.

“So you have your high school diploma?” the judge asked.

DeCarlo, who just moments earlier had been sworn in and pledged to be completely truthful in his answers, paused for a brief moment.

“No,” he ultimately said. “I didn’t finish high school. I dropped out. I’m sorry.”

“Did you drop out in the 12th grade?” Howell asked.

DeCarlo admitted that he was the one responsible for defacing a door to a building named for two Capitol Police officers who were killed in the line of duty.

“Did you and Mr. Ochs then approach the Chestnut-Gibson Memorial Door to the Capitol between 3:08 p.m. and 3:12 p.m.?” Howell asked.

“And did you write the words ‘Murder the Media’ with permanent marker on that door?” Howell continued.

“Did you pose for pictures in front of that memorial door?” the judge continued.

“I did,” the defendant replied.

The Chestnut-Gibson Memorial Building is named for Jacob Joseph Chestnut and John Michael Gibson, who were serving as U.S. Capitol Police officers when they were killed in 1998 by a gunman who opened fire after entering the Capitol building through a metal detector.

As part of her colloquy, Howell also asked Ochs about his affiliation with the Proud Boys, a right-wing extremist group whose founder has reported ties to white supremacists. The Canadian government lists the group as a terrorist organization.

“As of Jan. 6, 2021, did you hold a leadership role within the Proud Boys as an elder?” Howell asked Ochs, who hesitated in his response and asked to speak privately with his lawyer, Edward MacMahon, Jr.

After a brief break, Ochs returned, and Howell repeated her question.

“After consultation with your counsel, as of Jan. 6, 2021, did you hold a senior leadership role within the Proud Boys as an elder?” she asked.

“Senior leadership may be an exaggeration, but yes, I was an elder,” Ochs replied.

Howell asked how what she said was an exaggeration.

“This isn’t some concrete mafia group,” Ochs replied, adding that “it’s a term of respect” and that he wasn’t sure where the judge was going with her question.

“I’m just trying to clarify what you’re saying,” said the judge. “As an elder, did you have responsibilities that included the approval of new chapters of the Proud Boys?”

Ochs indicated that he did and confirmed that he was the founder of the group’s Hawaii chapter.

“When did you do that?” Howell asked.

“We Stormed the Fuckin’ U.S. Capitol and Made Congress Flee”

According to the statements of facts that set out the factual basis of the men’s guilty pleas, both Ochs and DeCarlo celebrated their approach to the Capitol, their breach, and their apparent role in successfully forcing Congress to stop certifying the results of the election.

“We’re not supposed to be here, this is beyond the fence,” Ochs said to DeCarlo as the two first approached the West Front.

While inside at the Crypt, the men took pictures of themselves smoking cigarettes, which Ochs posted to social media with the caption “Hello from the Capital [sic] lol.”

“Where’s Nancy?” DeCarlo yelled while in the Crypt. “Where you at, Nancy?”

On Friday, DeCarlo confirmed to Howell that he was referring to House Speaker Nancy Pelosi (D-Calif.), a target of numerous people charged with the U.S. Capitol breach.

While in the East Lobby of the Capitol Crypt, Ochs and DeCarlo encouraged people who were using objects to block crash doors that police had tried to close in an attempt to keep rioters out of the building. They then met up with other Proud Boys — including Ethan Nordean and Paul Rae, both of whom have since been charged with Jan. 6-related felonies — and celebrated with a group hug, according to court filings.

While walking away from the Capitol, Ochs and DeCarlo made a video.

“Sorry we couldn’t go live when we stormed the fuckin’ U.S. Capitol and made Congress flee,” Ochs said on the video.

Some time later, Ochs shared a video in an encrypted messaging application of him and DeCarlo on the streets of Washington.

“Viewers,” Ochs said. “We have some good news … we have just, uh, peeked through this window, and on the television, the headline reads that Congress stopped the vote when we stormed the Capitol. And, as we’ve been saying all day, we came here to stop the steal.”

“We did it,” DeCarlo interjected, later adding: “That’s what I came down here to do. We fucking did it.”

“It may resume, but the steal is for now stopped,” Ochs said. “You’re welcome, America!”

The pair’s plea agreements also call for each of them to pay $2,000 in restitution toward the estimated $2.7 million in damage to the Capitol — an amount that Howell questioned due to the fact that the dollar amount of that damages has gone up since last year.

“Could you explain why it is that the government, even though the estimated damages is going up, isn’t requesting a higher restitution amount from defendants convicted of felony offenses?” Howell asked Assistant U.S. Attorney Alexis Loeb.

“Your Honor, I don’t have the calculations in front of me,” Loeb said. “What I know is that even though the total amount has gone up, I think based on our calculations [based on] the number of defendants and various severity of crimes, I think the equations in our most recent plea offers still determine that that is an appropriate amount of restitution.”

“If, at the time of sentencing, you could provide a more fulsome explanation, that would be appreciated,” said Howell, who has previously questioned some of the Justice Department’s decisions in Jan. 6 prosecutions.

Howell set sentencing for Dec. 9. Although the judge can sentence both defendants up to the maximum 20 years in prison, the plea agreement estimates a range of 41 to 51 months behind bars.

Howell also noted that the men had entered into “wired” plea agreements, meaning that they must both agree to plead; if one defendant decides to withdraw, the agreement will no longer apply to the other.

Read the statements of offense for Ochs and DeCarlo, below.