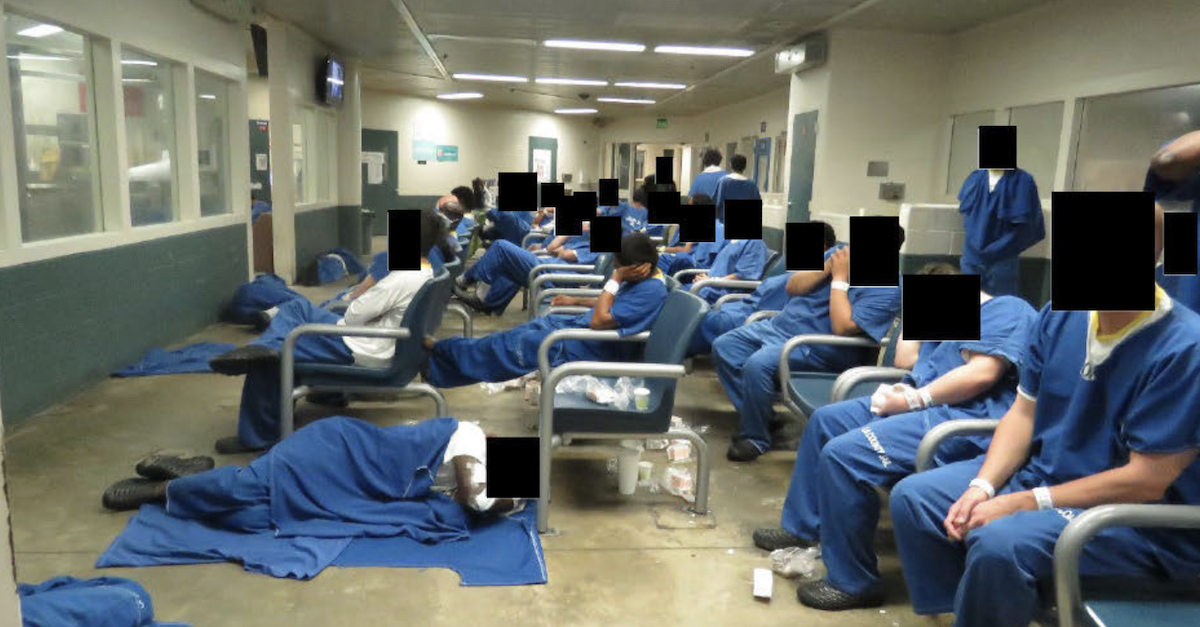 The American Civil Liberties Union included this photo of the jail inmate processing room in its memo asking a federal judge for a temporary restraining order to halt “barbaric” conditions inside Los Angeles jails.

The American Civil Liberties Union is asking a federal judge to stop a “crisis” inside Los Angeles jails, in which inmates are chained to benches or chairs for several days, left to defecate in garbage cans and given “untimely or no access to medical and mental health care.”

A new filing in a 47-year-old class action says the county’s process for booking people into jail leaves many waiting for days in its “deplorable and barbaric” inmate reception center, including a 72-year-old man who died in June after being held there for two days without medical attention. Another inmate with schizophrenia, Jhean Banos, was kept in the processing center for “more than four days” last month, leaving with cuts and bruises on his wrists that ACLU lawyers say were likely caused “by being cuffed for more than 99 hours.”

His mother, Celia Banos, said in a press release: “My son’s mental health is not a crime.”

“Instead of providing him with the treatment he needs from health professionals, the county resorts to locking him up without care and without his medication,” Banos said.

Ambrose Brooks S, coordinator of the JusticeLA Coalition, said the county’s “horrific treatment of people in the jails is egregious but sadly comes as no surprise.”

The statement is well supported by the allegations in the lawsuit, which was filed in 1975 and has included groundbreaking court orders on minimal jail requirements, such as mattresses for anyone staying overnight that the ACLU says are currently being ignored.

Los Angeles County, which includes 88 incorporated cities, has the largest jail system in the United States with about 14,600 inmates.

In a 48-page memorandum filed Thursday in the Central District of California, lawyers with the ACLU Foundation of Southern California say they agree with a vision set forth over the years by county officials “that treats people with mental illness in the community, instead of warehousing them in the barbaric Jail.”

“But critically, County leaders fail to put their money where their mouths are and fund community alternatives to incarceration at a level necessary to meaningfully alleviate the crush of people with acute mental illness in the Jail,” according to the memo.

County officials will not comment on the filing, citing the pending litigation.

The memo calls for inmates to be kept in the processing center for no more than 24 hours and to improve sanitation standards to a minimal level. It includes declarations from dozens of inmates describing conditions that ACLU lawyers described as “unconscionable hardships,” including one man with paranoid schizophrenia and depression who spent several days waiting for a bed.

The memo cited other findings by Huntsman’s office, including a warning issued in August 2021 that said jail crowding had left people stuck in the processing center for days. A report in 2019 also decried the use of restraints to tether mentally ill people to chairs — and some chained to a front bench waiting area for up to 166 hours straight. Food also is limited to “a peanut butter and jelly sandwich for breakfast and lunch, sometimes a burrito at dinner, cookies, and orange juice.” The processing center is also a “powder keg” for violence, with deputies being assaulted. ACLU attorneys observed the processing center firsthand and embedded photos in the memo showing inmates sleeping on floors near piles of trash, backed-up toilets and other unsanitary conditions.

“The fact that hundreds of class members have gone days without a bed, bunk, or mattress unquestionably violates orders of this Court, the 1979 Judgment, and constitutional and statutory requirements,” according to the memo. “Plaintiffs have shown not only that the number of people in the IRC repeatedly has exceeded capacity, but also that the sheer quantity of class members crammed in the IRC for days on end, creates ‘toxic’ living conditions for both the people detained in the unit as well as the people working in it.”

The first key holding in the case came in 1978 from the now-late U.S. District Judge William P. Gray Jr., according to the memo, who ruled conditions inside the intake center were “constitutionally intolerable” following a three-week trial “and two unannounced visits” to the jail.

The memo quotes Gray’s order: “The closest comparison that I can draw to such a spectacle is that of an overcrowded pig pen,” and it highlights his finding that if a detainee is in a holding cell, jailers “must at least give him a place to sit on a bench or a chair.” Another judgment in 1979 said every prisoner kept overnight “shall be accorded a mattress and a bed or bunk upon which to sleep.”

The case remained active for another 36 years, with several other judges assigned following Gray’s death in 1992. (A Los Angeles Times obituary of Gray described him as the judge “who oversaw jail reforms” in its headline.)

Senior U.S. District Judge Dean D. Pregerson has had the case since 2005, and he required regular updates on jail conditions from 2007 to 2015. He deactivated the case in March 2015 but retained jurisdiction, which left the door open for the ACLU’s current revival effort.