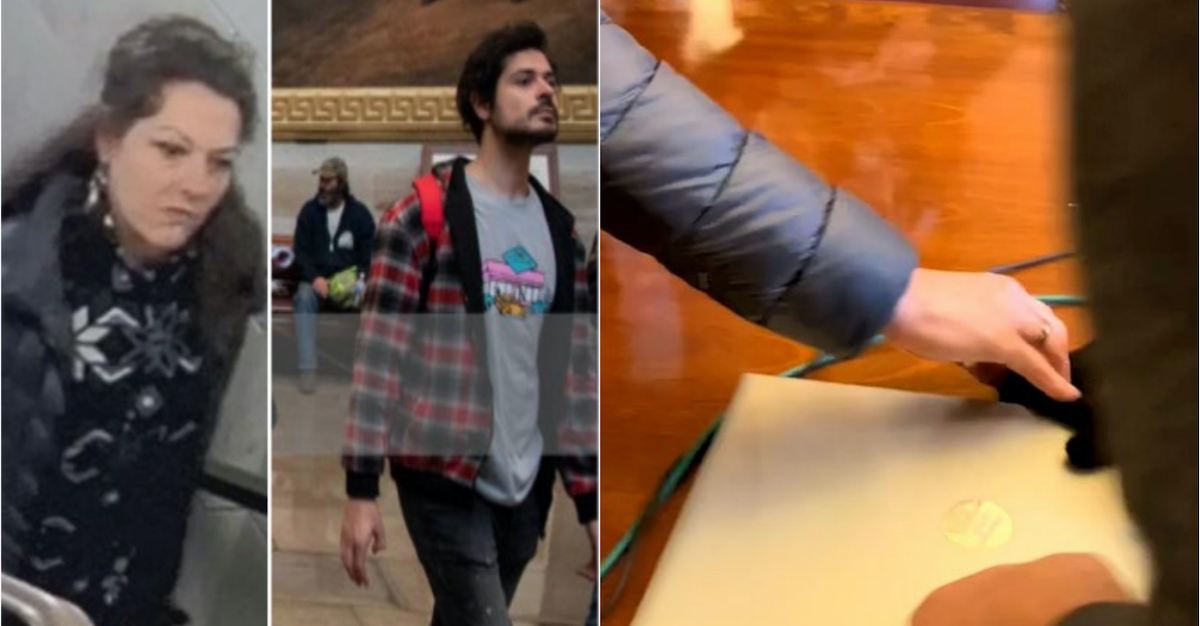 A mother-and-son team dubbed “Airheads” by internet sleuths stormed House Speaker Nancy Pelosi’s office, and the mom admitted to federal authorities that she helped a man steal a laptop there, according to court papers unsealed on Friday.

The FBI executed an arrest warrant on Maryann Mooney-Rondon and Rafael Rondon in Syracuse, N.Y.

Attributing the development to a law enforcement source, HuffPost broke the news of the development, which the case’s unsealed docket later confirmed. The news outlet’s justice reporter Ryan Reilly, author of the upcoming book “Sedition Hunters,” has profiled an online collective of citizens who have assisted in what he calls an “unprecedented, crowd-sourced FBI manhunt” for the perpetrators of the Jan. 6 siege of the U.S. Capitol.

The “Sedition Hunters” reportedly dubbed the mother-and-son team “AirheadLady” and “AirheadBoy” because both were seen wearing emergency escape hoods.

Authorities reported finding the clothing they wore to—and took away from—the U.S. Capitol when searching their home on June 29. 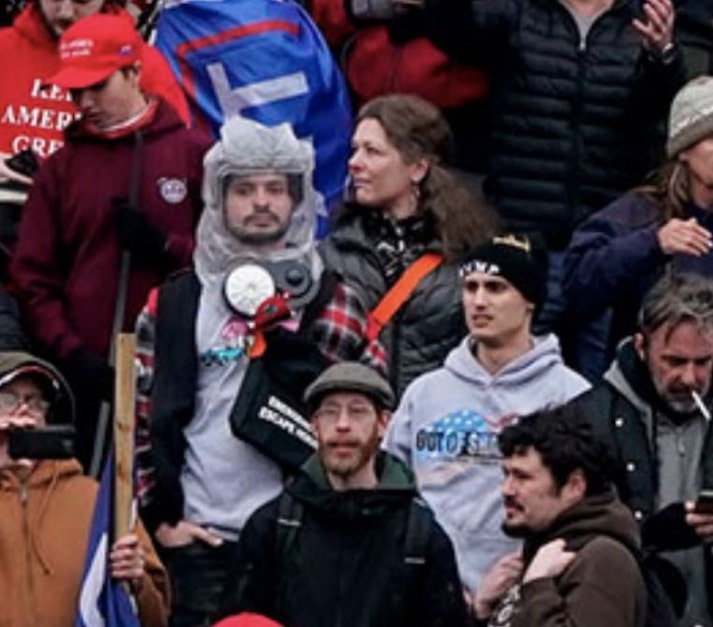 Authorities say this is Rafael Rondon wearing an emergency escape hood, which earned him the moniker “Airhead” among internet sleuths.

“Additionally, two emergency escape hood bags taken from the U.S. Capitol were located in the home,” the FBI wrote in their affidavit.

Do you have friends & family who are on facebook? Do they want to see justice done by helping ID #seditionists like FBI 224 & 225 –#airheadboy & #airheadlady? They can share this wanted pic by going to our fb page: https://t.co/sxqHpVGgPm pic.twitter.com/a8QOkqtpFC

A bystander filmed them inside the conference room, authorities say.

“In an approximately 5-second video recorded by a bystander from inside the Speaker’s office conference room, an individual’s arm is shown reaching from outside the frame of the recording toward a laptop and gloves that are sitting on a conference table,” according to the 9-page affidavit. “The individual is wearing a dark padded jacket and appears to have a ring on their right-hand thumb and another ring on their right-hand ring finger, consistent with images of MARYANN MOONEY-RONDON captured in CCTV surveillance footage. In the bystander video, a female voice states, ‘Dude, put on gloves,’ while an unidentified male with his back turned to the camera then appears to use the gloves to lift the laptop from the table before the recording ends.” 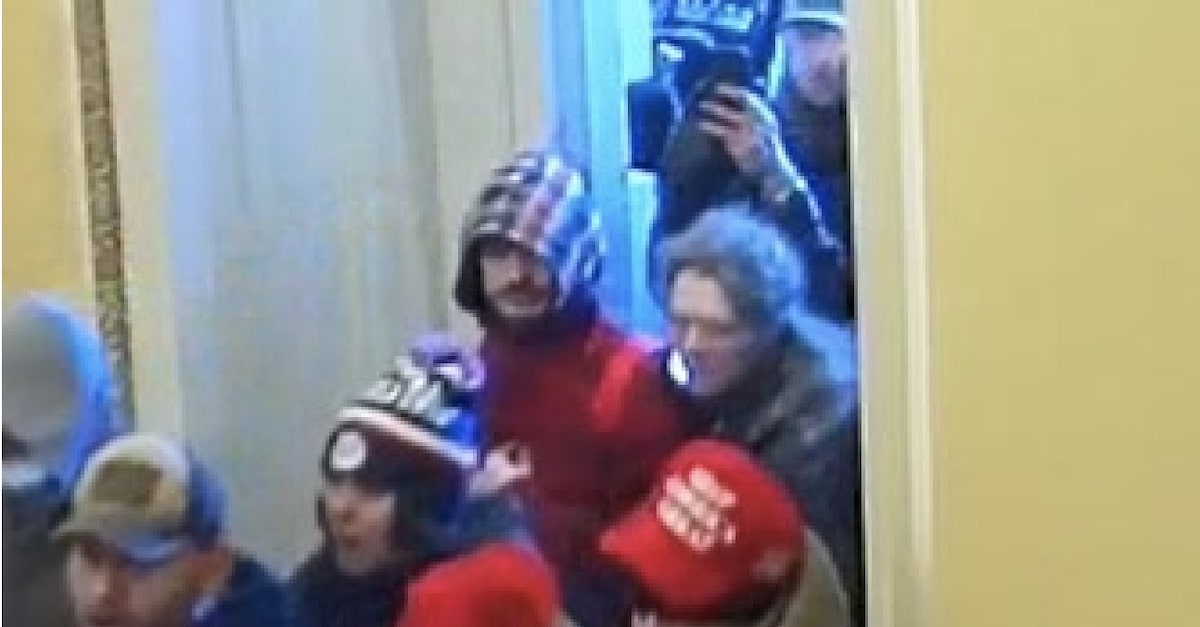 As previously reported from Law&Crime, another woman charged on the Jan. 6 docket—22-year-old Riley June Williams—has been accused of stealing a laptop from Pelosi’s office. Several other members of the pro-Trump mob allegedly rummaged around the California Democrat’s office and threatened her. One man, Richard “Bigo” Barnett, was pictured with a foot on a desk of her office and a stun gun in his pants. Barnett left behind a note calling her a “Biatch,” prosecutors note.

The FBI claims that the mother admitted in a voluntary interview to giving gloves to a laptop thief.

The mother depicted the laptop thief as intimidating, authorities say.

“He asked, he said, give me – I don’t know if it was gloves or a scarf I was wearing – and like I said he scared me,” she is quoted telling authorities.

“When he asked for, whatever he asked for to, I think he just didn’t want to touch it . . . I mean that’s why I was like, we gotta get out of here, this isn’t right, I mean he scared the crap out of me,” she also allegedly said.

The son is also quoted making candid statements to authorities, admitting to riding the Metro into Washington, D.C. on Jan. 6 “because I’m not taking my car into the city which, the Capitol building I’m about to break into.”

Many Trump supporters have depicted the Jan. 6 assault on the U.S. Capitol as an unplanned and spontaneous outgrowth of a peaceful rally, despite countless statements from its participants about long-planned violence following a perceived “call to action” from the former president.

“While we were in the office, one of the [individuals], he was trying to rip the ethernet cords to one of the laptops, and he yelled at me and my mother to help him. And I was honestly a little bit afraid, because I didn’t know if he had anything on him . . . So I assisted him a little bit, and that was probably stupid of me,” he is quoted telling authorities.

According to the FBI, the son added: “I think I like pushed in his bag a little bit using a glove ‘cause he didn’t want to get his fingerprints on it.”

As first noted by HuffPost, the FBI concedes having raided the wrong suspects in Homer, Alaska, before finding the mother and son in Syracuse. The botched raid hit up the home of Alaskan Trump supporter Marilyn Hueper, the news outlet reported.