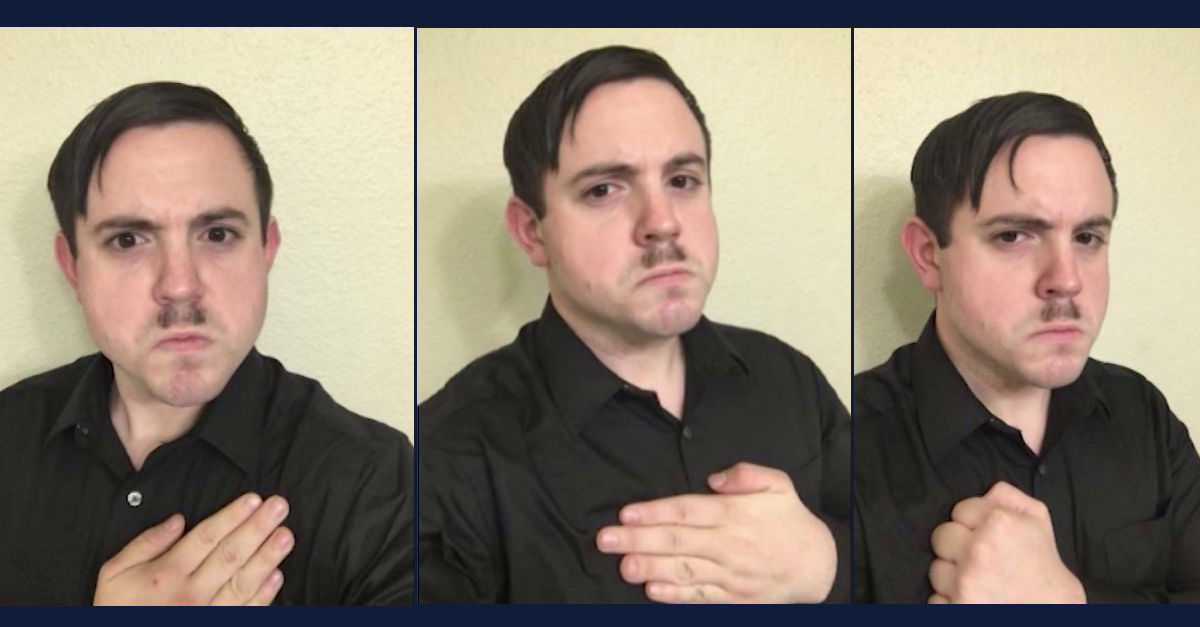 A white supremacist former Army reservist who dressed up as Adolf Hitler before joining in the siege of the U.S. Capitol should spend six-and-a-half years in prison for his role in the “attack on the beating heart of democracy,” federal prosecutors wrote in a sentencing memo.

“The resulting cardiac arrest may have been temporary, but it remains a harbinger of chronic challenges, and a reminder of the important function that sentences in these cases serve,” the memo states.

In the sentencing memo, prosecutors say that Hale-Cusanelli has used a relative’s fundraising organization to organize fellow extremists behind bars.

A former Army reservist and a security contractor, Hale-Cusanelli held a “secret” clearance, and his access to classified information alarmed many after his ideology became apparent. Court papers showed him with a Hitler mustache and hairdo, aping the dictator’s overwrought expressions in faux-stern selfies with his hand over his heart. It was more than World War II-era cosplay. People who knew Hale-Cusanelli told federal investigators that the former reservist expressed support for killing Jews and “babies born with any deformities or disabilities,” and said that “Hitler should have finished the job.”

Another told investigators that Hale-Cusanelli “spoke of his dislike of Jews every day.”

After the Jan. 6 attack, a confidential human source recorded conversations with Hale-Cusanelli connecting his hateful ideology to his actions inside the Capitol. “I really fucking wish there’d be a civil war,” Hale-Cusanelli was quoted telling the source. He told the source that civil war would provide a “clean slate” that would get rid of “entrenched interests,” by which the source understood him to mean Jewish people, the sentencing memo states.

When asked what he would do if he were “King of America,” Hale-Cusanelli replied that he would expel the Jews and all Congress members.

“I’d give them 24 hours to leave the country,” Hale-Cusanelli is quoting saying of the Jews.

He responded to a question about whether Congress members were “part of” the Jews by saying “No. But also, yes.”

“But no, what I would do is just arrest them all. Not all the Jews, … a lot, but yeah. I would purge, I would purge Congress. None of them have any purpose or use. They’re all a bunch of insider-trading c*nts. They do nothing but vote for war and rape kids.”

Prosecutors noted that his ideology continues to drive his actions.

“It is well established in the record at this point that Hale-Cusanelli subscribes to White-Supremacist and Nazi-Sympathizer ideologies that drive his enthusiasm for another civil war and formed the basis of this Court’s pretrial determination that Hale-Cusanelli was a danger to the community,” Justice Department attorney Kathryn E. Fifield observed in the memo.

This conduct, prosecutors say, has continued with Hale-Cusanelli behind bars.

“Sources inside the jail also reported that Hale-Cusanelli has used the power of a fundraising organization spearheaded by his adoptive aunt to organize inmates and curry favor,” the sentencing memo states. “One inmate said the situation was like ‘the movie Mean Girls, but with racist, antisemitic extremists.'”

During trial, Hale-Cusanelli feigned ignorance of where he was — claiming he had no idea lawmakers were inside Congress.

“I know this sounds idiotic, but I’m from New Jersey,” he reportedly testified.

As summed up by prosecutors: “Hale-Cusanelli lied, and the jury saw through his lies.”

They have asked U.S. District Judge Trevor McFadden, a Trump appointee, to impose a 78-month sentence, which is roughly midway from where the government calculated Hale-Cusanelli’s sentencing guidelines. His sentencing has been scheduled for Sept. 22 at 10 a.m.

Read the sentencing memo, below: